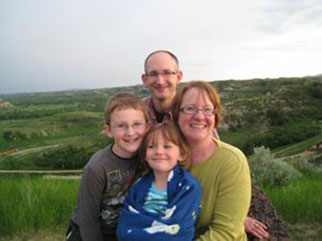 Tessa Moon-Leiseth, her husband, Jon, and their children, Isaac and Sophia, will move to South Africa in June.

When Tessa Moon-Leiseth first saw the ad on the ELCA’s Facebook page, she felt “startled” by how well the open position with the ELCA in the area of global mission fit her gifts and skills.

As campus pastor at Concordia College, one of 26 colleges and universities of the ELCA, Tessa has enjoyed encouraging, mentoring and providing spiritual care for students. Now she is playing a similar role as country coordinator for the young adults of the ELCA who are serving in South Africa.

This will begin a new chapter for Tessa, her husband, Jon, and their children, Isaac, 9, and Sophia, 7, who will call Pietermaritzburg, South Africa, home for the next four years.

And as they eagerly await their new journey, the Leiseths acknowledge it will be hard to leave family and friends. “There is a mixture of grief, fear and anxiety,” Tessa says. “We are leaving our safety net: what we know, things to which we are accustomed, and things that make us feel comfortable.”

Even so, their “clear and compelling” call drives them forward, Tessa says. “That is the rock and anchor we hold onto as we navigate this. We don’t know what it means, we don’t know what it will be like, and we cannot even imagine the ways in which this experience will transform who we are. Yet we know this is what we are being called into.”

“There was something just so calling about the work — to impact the transformation of the young adults who come and serve,” she says. “It matched really well with the values, hopes and dreams we have for our family, but we never imagined it would be embodied in this way. We never expected to live overseas, but we knew we wanted our children to know and experience God’s vast world beyond what they have known. All of these pieces have just come together.”

Tessa also recognizes that it is a different day and age of doing global mission work. “This is not packing your belongings in a crate and going on a ship and coming back a decade later,” she says. “Knowing that does help with a lot of the emotions.”

In fact, missionary service has shortened over the years, says Twila Schock, who directs ELCA Missionary Sponsorship. “It used to be when a missionary went out, family and friends would hold a funeral because it was not expected for them to return,” she says.

Today, missionaries serve four to six years for long-term assignments, and one to two years for short-terms, compared with 10- to 30-year commitments missionaries had in the past. Currently, 225 ELCA mission personnel serve in more than 40 countries, working hand-in-hand with global neighbors teaching, preaching, healing, peacemaking, building and growing communities. Of the 225, some are self-funded volunteers and others are serving a two-year commitment.

“Sending missionaries is core to our identity as a church,” Twila says, adding the ELCA remains among the few mainline denominations to still fully support its missionaries. “A lot of missionaries do not get deployed until they fund 80 percent of their own support,” she says. “But supporting missionaries means they can focus on their ministry rather than on fundraising.”

And individuals, congregations and other groups play a large role in that support through ELCA Missionary Sponsorship, Twila says. “It is a fun and easy way to participate in the life of the church beyond our church walls,” she says. And with missionary blogs, Skype and Facebook, sponsors can stay abreast of missionaries’ work and other day-to-day activities, she says.

Cindy Novak
Novak is a freelance writer and a member of Our Saviour Lutheran Church in Naperville, Ill.