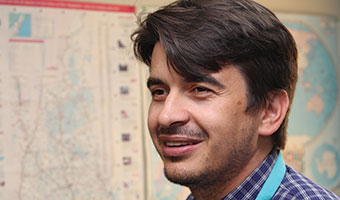 As a teen, Alen Omerbegovic and his family were forced out of their home during the ethnic cleansing that accompanied the war in Bosnia and Herzegovina in the 1990s. They couldn’t take anything with them, not even photos.

Separated from his family, Omerbegovic had his 17th birthday during his three-month and three-day stay in a concentration camp. He slept on concrete, ate once a day (mainly what he calls “bad food”) and witnessed people being beaten to death, among other atrocities. 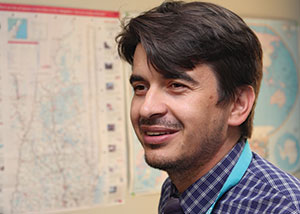 After his release from the camp, he was reconnected with his family, who were already on the “safe side” in Bosnia. About a year later, as a displaced person (a refugee in his own country), he started learning English through the Danish Refugee Council.

This experience was a defining moment for Omerbegovic, who now uses his English skills as program manager for a language bank administered by and for refugees in New Hampshire, where he now lives.

Within the past year, the organization resettled more than 700 individuals. Of these, 25 percent are from the Middle East. Many of Ascentria’s language bank interpreters are refugees who were resettled by the organization, including Omerbegovic.

Seeking a place to call home

In 1997, Omerbegovic fled to Holland, where he lived for two years before being recognized as an asylum-seeker and resettled through Lutheran Immigration and Refugee Service (LIRS). Ascentria, in partnership with LIRS, found him an apartment in Concord and helped him secure a job making cleats for shoes.

In his spare time, Omerbegovic used his English skills to help other refugees in Laconia, N.H., connect with social services. He did this on his own, motivated by his experience as a displaced person. “I was on the receiving end, and now I was providing those services,” Omerbegovic said.

This meant helping even those refugees who were involved in the ethnic cleansing in his country. “I don’t care if people are of my ethnicity or not, I wanted to help,” he said. “For me, it’s a human thing to do. I hope everyone would do that.”

Eventually his passion led to full-time work. In 2000, Ascentria offered him a part-time job helping case managers and caseworkers, which led to his being hired full time as a case aide in August 2001. 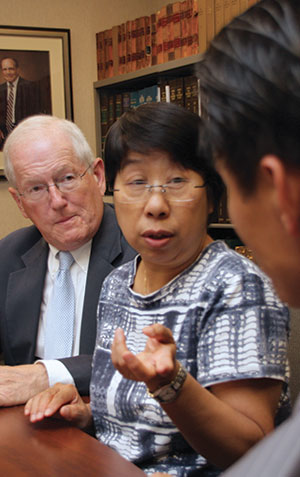 Ascentria Care Alliance
“Our interpreters are giving back to their community, which opens so many opportunities for them,” Omerbegovic says. “We’re more than just a safety net.”

Interpreters are prescreened for their language proficiency in English and their “target” language. They also are trained to ensure that they can communicate effectively and accurately. Among Omerbegovic and his colleagues, they command 60 languages from Arabic, Albanian, Chinese, Farsi and Malay to Serbian, Somali, Swahili, Tamil, Twi, Urdu and Vietnamese. They serve 200 clients in interpretation services alone.

“What we’re doing is not just providing interpretation for an hour, but providing an opportunity for a refugee or immigrant to earn a living wage to help them become self-sufficient,” said Kathy Lucier, language bank director in Worcester. “The interpreters go back to their communities and help their neighbors, breaking the cycle of poverty. They also help their communities economically by purchasing food at a local store that employs local residents.”

In September 2014, LSS was renamed Ascentria Care Alliance. The word Ascentria honors the organization’s Lutheran heritage because it references the Ascension and rising together, Lucier said.

That rising up together is at the heart of the language bank program. “We’re planting the seeds that allow individuals to lessen [their] reliance on a social safety net,” Lucier said. “We’re empowering our [refugee] interpreters and creating a more positive future for both them and the refugees with whom they work.”