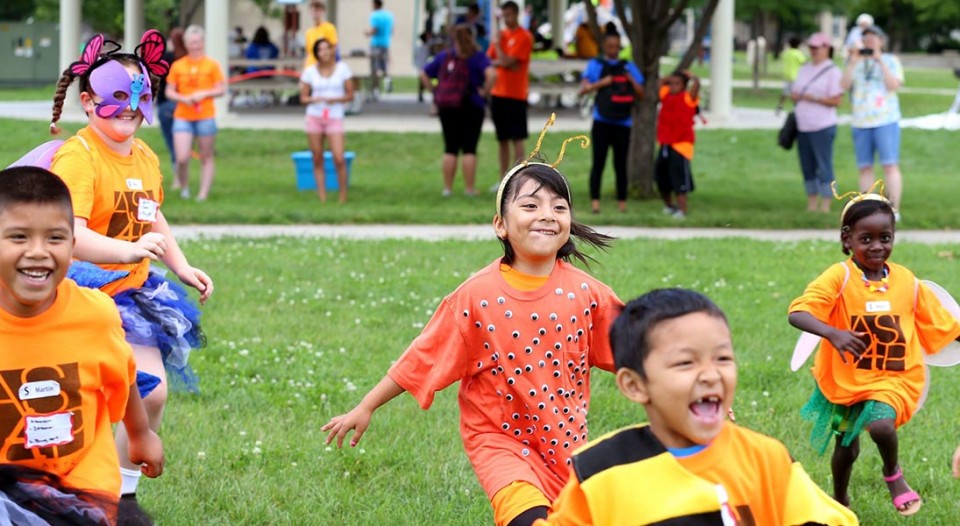 Children run in a relay as part of the summer camp of the After School Arts Program founded by St. John Lutheran Church in Des Moines, Iowa.

School funding hasn’t fully recovered from the economic recession of 2007 to 2009. Since then, at least 26 states budget less per student, according to the Center on Budget and Policy Priorities. Arts and music are typically cut first, though U.S. News & World Report cites studies linking the subjects to educational development.

“I have the best job in the world,” said Bolton King, a member of St. John. “Kids learn life skills and get a great deal of confidence. … A lot of the time in art, there’s not a ‘right’ answer. They learn to balance process with product and to understand the value of both.”

ASAP affects parents and teachers too. “Each program has a presentation component where students must perform or exhibit—stand up with their work,” Bolton King said. “Often parents will say, ‘I had no idea my child was capable of this.’ ”

At one such event, a quiet middle-schooler named Wen (last name withheld) shared how he had become a leader: “Drama club has really … [raised] my inner confidence to express myself in public and to work in groups and to not be afraid to actually socialize.”

ASAP started out as an outreach ministry of St. John. Members sought ways to “serve the city outside its doors,” said Rachel Thorson Mithelman, a pastor of St. John. “We have a number of incredibly talented artists and musicians in our congregation—a very diverse group of professionals with a wealth of experience.”

Their looming question was how to organize those talents into outreach and serve children in the city’s high poverty areas. Without in-school programs, such children also lacked the money, transportation and ability to access activities offered by existing arts organizations.

A visit to Sitar Arts Center, a youth program affiliated with a group of ecumenical congregations in Washington, D.C., inspired Thorson Mithelman to reach out to the Des Moines school district. In making that connection, St. John found a way to match resources with needs.

In 2007, St. John launched ASAP, which then served third- through fifth-graders in its neighborhood. Members with arts and music backgrounds volunteered as teachers. In 2009 it became a 501(c)(3) nonprofit organization, which opened up a broader range of funding sources.

“By that time, we had realized we were meeting a real need—a hunger,” Thorson Mithelman said. “In retrospect, those weren’t the best economic times to start a nonprofit, but no one saw it as a barrier.”

ASAP now supports part-time paid staff, including Bolton King. Teaching artists are paid, too, which sends a powerful message, she said. “We’re putting our money where our mouth is. We’re showing the kids they can have a career as an artist,” she added. “Our commitment to pay teaching artists also allows us to keep the quality of instruction very high.”

Bolton King would like to see churches replicate the ASAP model in other cities. “It’s a natural fit,” she said. “I watch students experience the joy of being treated like the valuable, creative jewels that they are. I really love these kids.”