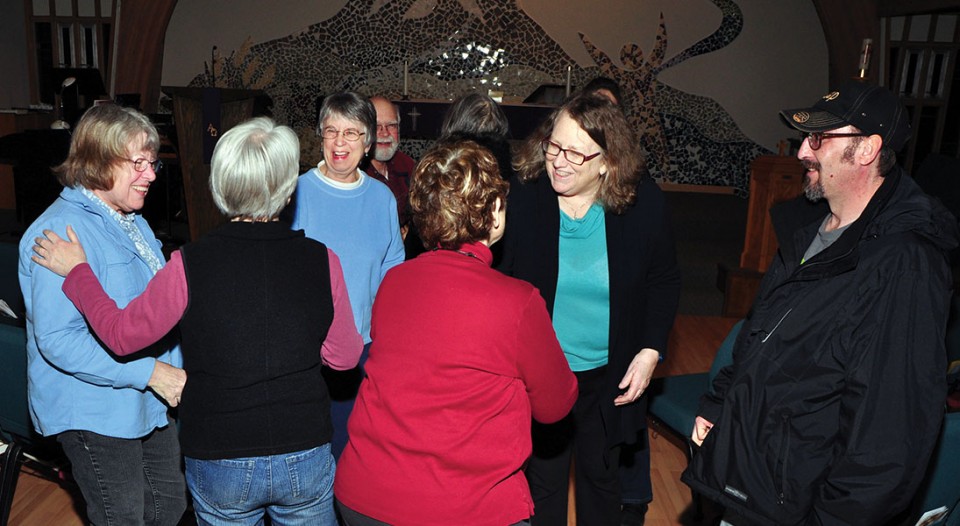 Members of Asbury Our Redeemer Partnership, Hood River, Ore., talk after bell practice. The congregation’s 140 parishioners are members of both the ELCA and the United Methodist Church.

It was fiscal pragmatism that originally led Our Redeemer Lutheran Church, Hood River, Ore., to
look at merger options.

Nearly a decade later, a culture of collaboration, service and faith enrichment has the congregation and United Methodist Church neighbors thriving in a combined church: Asbury Our Redeemer Partnership.

“It’s very refreshing,” said partnership member Kris White, who came from Our Redeemer. “I’ve experienced so much personal spiritual growth as a result of the Methodists coming in. I was happy before, but this has added so much to my personal faith.”

Eight years ago, after more than 40 years as a congregation, Our Redeemer and its then pastor Andy Wendle took a hard look at their finances, demographics and future. Sixty miles east of Portland in the Columbia River Gorge, Hood River is a resort town noted for an extraordinarily high cost of living.

“We had a fairly visionary pastor who realized that in five or 10 years we’d no longer be able to afford a full-time pastor,” said partnership member Deborah Chenoweth, who came from Our Redeemer. “We learned other congregations in town were having the same kinds of conversations, so we started talking to other groups.”

One of those congregations was Asbury United Methodist, which was worshiping in a 1912-built structure in need of significant updating.

“Their congregation was even older than ours, and they couldn’t afford a full-time pastor either,” Chenoweth said.

Our Redeemer and Asbury started doing some things together and in July 2011, Wendle was half-time pastor for both. Members of Asbury made a formal proposal to move in together and they worshiped in their sanctuary for the final time on
Dec. 30, 2012. In February 2013 they voted as a congregation to sell their building.

“There was quite a bit of discussion and it wasn’t easy,” Chenoweth said. “We lost some members; they lost some.”

The two congregations partnered under an agreement known as Lutherans and Methodists
in Partnership—LAMP. Despite the acronym, the early days of the merger weren’t all bright.

“The older we get, the more we have difficulty with change,” said partnership member Bob White, Kris’ husband. “Folks are basically good and decent, but sometimes you get blindsided by your own history and priorities and it’s tough to let those go.”

The discord led Wendle to move on in early 2013. Two interim pastors later, David King, a Methodist, is now pastor of Asbury Our Redeemer.

“I have been welcomed warmly,” King said. “There are still some folks who aren’t real happy. But I think [the merger] is a good thing.”

In December 2015, Asbury Our Redeemer members voted to replace a temporary covenant of union with a permanent constitution. The vote passed 57-3. Next on the horizon is coming up with a new name for the combined congregation—of which all 140 members are recognized as full members of both the ELCA and the United Methodist Church.

“I think things are working very well,” said Gigi Siekkinen, who came from Asbury United. “The United Methodist emphasis on outreach is complemented by the Lutheran congregation’s strong sense of what’s important to them in a worship service.”

The project, which began in December 2011, included raising money for a 6,500-square-foot warehouse on church property for a food bank operated by a community group known as FISH (Friendly, Instant, Sympathetic Help).

“Being able to focus on the food bank was helpful as we worked through some of our more difficult stretches,” Siekkinen said. “The food bank is a great resource for our community, and it was the Lutherans who initiated the project.”

Our Redeemer members knew FISH, a 40-year-old nonprofit, was making do in a small, insufficient facility and decided their comparatively large lot could support the kind of warehouse the food bank needed. It took four years of grass-roots efforts—mailings, presentations to community groups, a variety of fundraising events—and grant proposals to generate the necessary cash.

“That as our goal held us together through some hard times,” Chenoweth said. “[The congregation and FISH volunteers] needed to raise a million dollars. [The warehouse] opened last June and has a walk-in cooler and freezer, solar panels on the roof, a huge garden and a meeting room for community use.”

In Hood River, FISH provides emergency food for 400 families; each can come once a month and receive up to five days’ worth of food staples. Marianne Durkan, president of the community food bank board, said, “We couldn’t have done it without that church.”

To Bob White, Durkan’s gratitude for FISH’s warehouse mirrors the happiness he and most others feel regarding the church merger. “I love the Lutheran church and am probably more conservative than liberal, but we’re all in this together,” he said. “Christianity is alive and well; being welcoming is pretty much a big part of it.”

Kris White added, “I’m sad for people who couldn’t accept it or see the positives, but our hope has always been that somewhere along the line they’ll be drawn back to what’s here.”