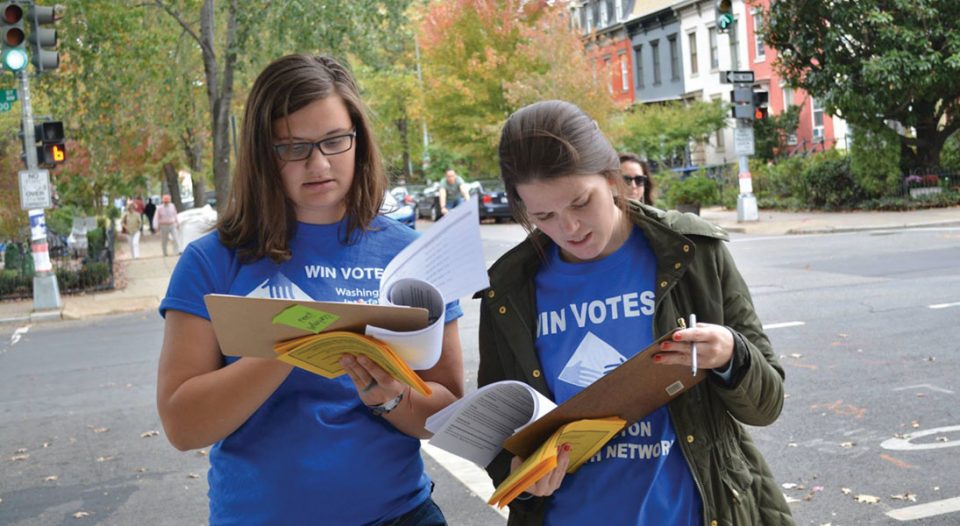 Working with the Washington Interfaith Network, Carol Ann Newgent (left) and Amanda Lindamood go door-to-door in their ward to find out what issues people care about and to increase voter turnout in the upcoming election.

Four summers ago, Luther Place Memorial Church in Washington, D.C., developed an arts-based summer camp for Latino families. Intentional listening in their neighborhood connected the congregation with parents and members who planned, dreamed and ultimately led a successful camp that continues today.

The idea of doing ministry with neighbors as opposed to doing service for them has been embedded in this congregation’s way of operating from its beginnings, said its pastor, Karen Brau. Because of this, a less hierarchical leadership model emerged at Luther Place. This year the congregation will add a worship component to its camp, realizing the dreams of a core group of members and neighborhood leaders.

Luther Place is part of a historically working class community that is now changing in economics and demographics. Those moving in are mostly young, affluent Caucasians, but there are still significant numbers of Latino immigrants and African-Americans who traditionally have lived there. For longtime residents, the pace of development means less affordability, disappearing community institutions and an inability to benefit from the fruits of development.

Brau said a prevailing cultural trend promotes a rapid pace, independence-oriented, do-it-yourself approach in this area, but this doesn’t build community or the body of Christ. Instead it tends to perpetuate white privilege and racial inequity in terms of who makes decisions and who is at the center of communal life, she said. This is where the congregation’s adherence to the principles of community organizing comes into play.

Luther Place doesn’t want to lose the vibrancy of its neighborhood, nor do members want their neighbors’ access to the abundant life that God intends to be compromised. So they seek relationships and partner with people being pushed to the margins. They also know that relating to and engaging with new residents is part of God’s call to the church. These challenges led the congregation to begin leadership development and intentional listening campaigns.

One of those partners is resident Silvia Inez Salazar. “When my affordable housing co-op achieved our goal of purchasing our building, we realized that gentrification in Logan Circle had quickly passed us by. For the 83 diverse working families that have lived in the building for decades, we questioned whether or not we still belonged in the neighborhood,” she said. “Along the way we were blessed enough to meet members of Luther Place … and explored ways to partner and reaffirm our sense of belonging.

“Events such as SoulFiesta, summer camp, holiday celebrations and the craft collective proved instrumental in our organizing work. We now have a renewed sense of community fellowship and are partnering with Luther Place on organizing a child care cooperative that is led by Latina immigrants.”

In her work, Brau said she adheres to the prophetic tradition that runs throughout Scripture, in which Jesus also operated. “True prophets are always exposed to conflict. Organizing provides guidance through such times,” she said. “Organizingfosters a community of prophets that identify with a particular time and place around which they are operating. But while prophets often can be right, making something new and good happen out of the truth they proclaim, that’s harder. That’s what organizing gives us the capacity to do.”

The congregation plans to continue organizing around immigration issues and their neighbors’ legal status, struggles that limit people’s access to basic and quality-of-life resources. They also will continue working through the Washington Interfaith Network (WIN)—their community organizing group—which is addressing homelessness and the lack of affordable housing in the area.

Taking on issues that matter