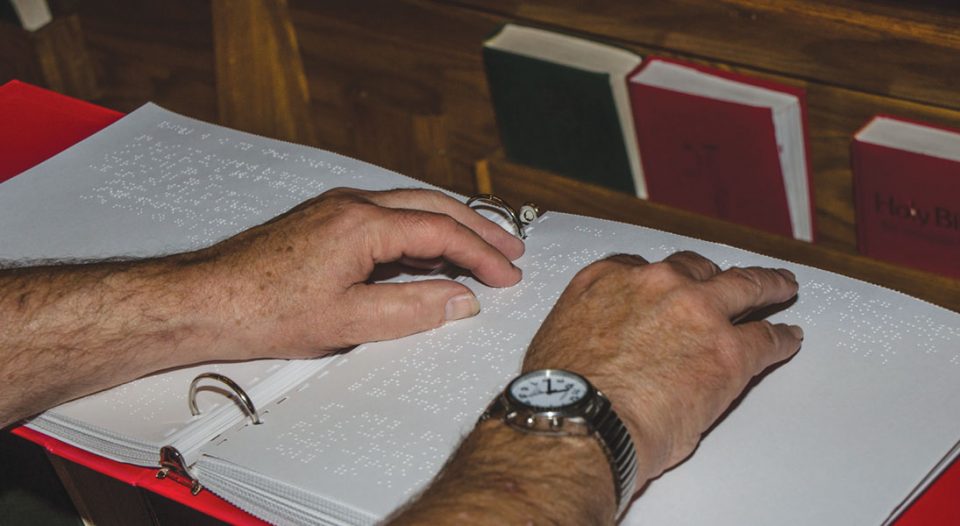 John Hemp follows along in worship with his new Evangelical Lutheran Worship Braille edition. Hemp had advocated for the creation of the Braille hymnal since 2009.

Most Lutherans don’t think twice about opening up a hymnal and being able to read the words inside. But for blind or visually impaired church members like John and Donna Hemp of St. Olaf Lutheran in north Minneapolis, following along without a Braille hymnal made worship a struggle.

Now the release of the Evangelical Lutheran Worship (ELW) Braille edition has made it possible for the Hemps to join in with the rest of their congregation. Released in May, each book contains more than 1,600 pages of Braille.

The ELW Braille edition has been a great victory for the Hemps, who had advocated for the project for many years. In 2009, John helped take the initial resolution to the Minneapolis Area Synod Assembly. The resolution passed unanimously and went on to be approved at the Churchwide Assembly. Despite delays in printing, the Hemps never stopped campaigning for the project.

The hymnals mean a lot to the couple, both physically and spiritually. Prior to publication, they said the lack of a Braille ELW often left them feeling excluded from worship. “We didn’t feel welcome or wanted,” John said. “We felt discriminated against.”

Worship is a different experience now. “When the whole church sings together, you can’t pick out the words very well,” Donna said. “It means a lot for my faith that I can follow along now.”

Both John and Donna have their own copies, which Dale Hulme, pastor of St. Olaf, said is essential. “Your eyes don’t bump into each other, but your fingers do,” he said, recalling John explaining the difference between sharing a book in Braille versus one in print.

Hulme has been involved with the project since the beginning. Last year he spoke with St. Olaf member Kathy Solberg about using some of the memorial funds that had been given to the church on behalf of her late husband, retired pastor Tim Solberg, to buy the Braille copies.

Not only had the Solbergs and Hemps been good friends for years, but the idea of doing something to continue the church’s mission of inclusiveness seemed a perfect way to honor her husband’s memory.

“It very much fit with Tim’s style of ministry of being welcoming to everyone and always finding a way to meet people’s needs where they are,” Solberg said. “It did my heart a lot of good that what he wanted to do was fulfilled after he was gone.”

The Hemps’ Braille hymnals were dedicated at a service at St. Olaf on May 22.

As he looks out over the congregation, Hulme is happy to see the Hemps being able to participate more easily now. “It’s nice to see them sing and join in like everyone else,” he said.

For more information about the ELW Braille edition, visit evangelicallutheranworship.org.