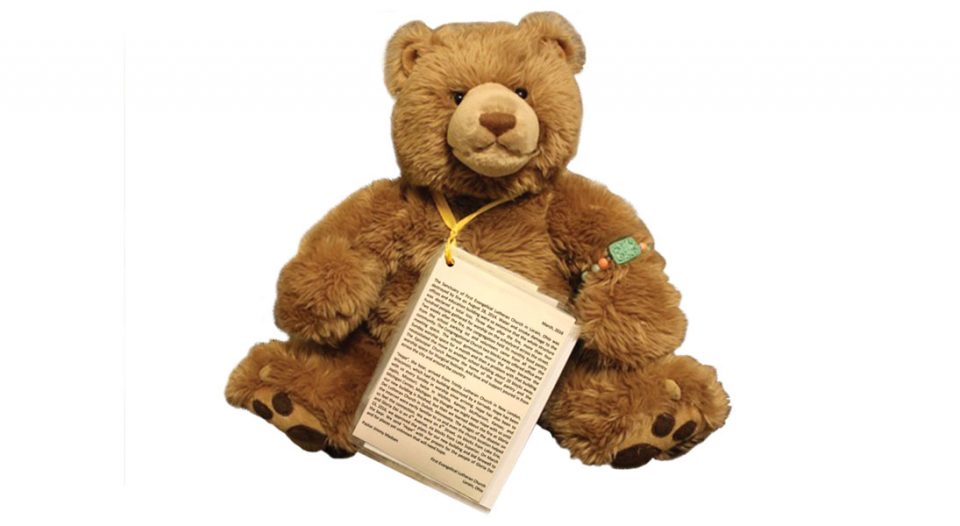 Gloria Dei Lutheran Church, Duluth, Minn., suffered a fire Feb. 18 that destroyed much of its furnishings, including the organ, piano, altar and stained-glass windows. The 110-year-old Gothic-style building and its pews, as well as the fellowship hall and attached office and education building, were destroyed by smoke and water.

Since then the congregation has worshiped at Faith Lutheran in Duluth’s east end, a small congregation that was in the process of closing.

“From day one we were welcomed with open arms,” said David M. Carlson, pastor of Gloria Dei.

Other area churches have held fundraising events, and the Northeastern Minnesota Synod has provided office space. From the start, people of the Duluth area reached out to Gloria Dei in sympathy, support and kindness, including the firefighters who donated altar flowers.

Perhaps the most surprising gift came in the mail during Holy Week. It was from First Lutheran Church, Lorain, Ohio. Hope, a stuffed bear, arrived from people who know what Gloria Dei is going through.

Hope has a yellow ribbon around her neck that strings together laminated cards. Each card tells the story of one of seven churches Hope has visited during her 11 years of comforting congregations that have suffered loss and tragedy, including fires, tornadoes, a pastor’s death and other traumatic events. A photo of each congregation is also on the cards.

“This little bear has spent time in the midst of our congregation,” the first card says. “It has heard the Scriptures read, sermons preached, prayers prayed and songs of praise sung. It knows both the joys and the heartaches of our people and has been surrounded by the love so freely given in our community of faith. It comes to offer you comfort and peace, with all the blessings of worship and love.”

In 2005 the Michigan congregation sent Hope to Christ Lutheran in Wichita, Kan., and from there she’s visited congregations in Missouri and Wisconsin before arriving at First.

“Hope has been with us every Sunday,” reads the card from First. “We send ‘Hope’ with our prayers for the people of Gloria Dei and for places yet unknown that will need hope.”

The unexpected gift reached Gloria Dei at the right time. Carlson shared about Hope’s arrival in his Easter sermon: “The living body of Christ is real, pictured on the back of First Lutheran’s card and those of other churches. The hope of the resurrection, demonstrated in tangible ways, is what continues to sustain us.”

Gloria Dei members plan to repair and refurbish their building and send Hope to a new temporary home. But until then, she is a beloved companion as the congregation moves forward.