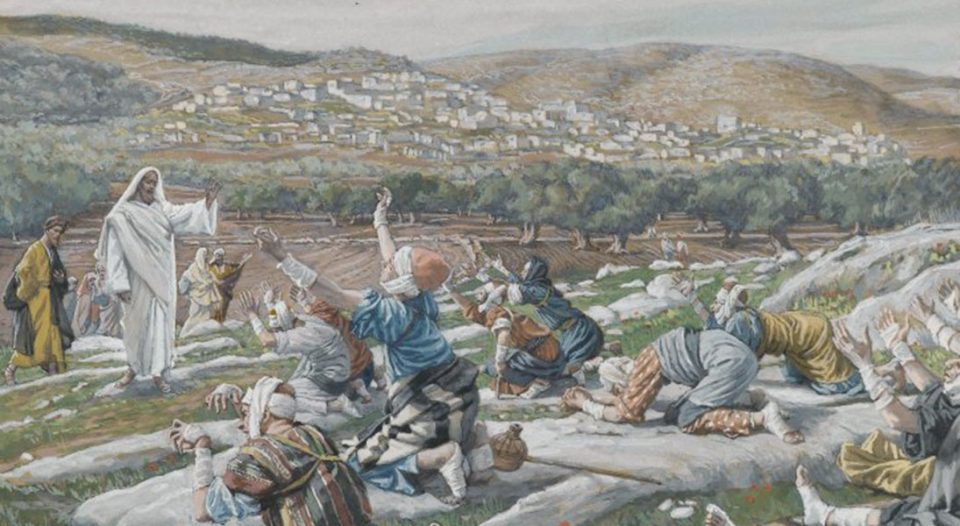 This file has been identified as being free of known restrictions under copyright law, including all related and neighboring rights.

The Healing of Ten Lepers (Guérison de dix lépreux) by James Tissot, between 1886 and 1894, Brooklyn Museum

Namaan was a powerful and important man with a problem. He was a leper who desperately wanted to be healed, but no one in his country could help him. Namaan had an Israeli slave who told his wife that there was a prophet in Israel who could cure leprosy. Namaan’s wife told her husband, who goes to see the king, prompting the king to write a letter to the king of Israel. The letter says, in short, “This is Namaan. Cure him of leprosy.”

Well, the king started tearing his clothes, which is the biblical equivalent of throwing things. He said, “This is impossible. I’m not God. What is he trying to do, start a war, pick a quarrel with me?”

At this point the man of God, the prophet Elisha, entered the scene. He sent a messenger to the king with a very pointed question: “Why have you torn your clothes?” In other words, “Why are you so upset?” The answer is simple: The king is so fixated with what he cannot do that he has lost sight of what God can do.

When we look at the world and its troubles, when we survey our personal lives that are so often hindered with difficult relationships and situations, when we look at the size of our problems and the smallness of our resources, it’s easy to be like the king and become discouraged if we focus on what we cannot do rather than keeping our hearts and minds centered on what God has done in the past and has promised to do in the future.

So Elisha sent word to the king to calm down and to Namaan, inviting him to come to his house to be healed. As Namaan approached the house, a servant came out and said, “Elisha says for you to go wash in the Jordan River seven times.” Like the king, Namaan went ballistic. He fumed, “Why is he showing me this disrespect? I thought that for me he would surely come out and stand and call on the name of the Lord his God and would wave his hand over the spot and cure the leprosy.” Namaan had an entire scenario in his mind about how this healing would go, and it was all tied to his sense of importance. And, although he received the promise of healing, he was not satisfied for it was not grand enough, not personal enough, not special. “The prophet didn’t even come out. I must not be very important. Humph!”

We will be dissatisfied with God as long as we focus on what we want and not on what God provides. This is a very difficult lesson for us to learn. We are so accustomed to the idea that, “The customer is always right,” and to our primary self-identity as a customer, a consumer, a recipient of the bountiful abundance that is America, that for me has become the defining mantra of our lives. The idea that we should trust God for what we need and stop worrying about what we want is so foreign to us as to be unintelligible nonsense. We will be regularly disappointed as long as we focus on what we want and fail to recognize the goodness God provides.

But Namaan’s entourage did not let him down. They said to him, “Listen, this prophet really didn’t ask you to do much, just wash in their little river a few times. If it works, good. If it doesn’t, then you can be angry.” And he calms down. He washes in the river. He is healed, and he graciously goes back to thank Elisha and worship God.

So, they stood on the side of the road, “keeping their distance,” the Bible says. They stood there because they had heard that Jesus, the faith-healer from Galilee, was in the neighborhood and would be coming by. They called out to him for healing, and Jesus responded by telling them to go to the priest and show themselves to be clean.

The 10 started on the road to see the priest no different than when they asked Jesus for healing. It was in the midst of their journey that they discovered themselves healed. So it is with us. Perhaps we came to church seeking a difference in our lives, looking for the healing of a hurt, the changing of a habit, the forgiveness of a sin. Maybe we have come looking for a new way to be in the world, a new direction and a new purpose for our lives. Why we are here, whatever our motivation for being in the church, no matter the reason we are standing on the road asking Jesus for help—we will be like the lepers; our help will not come before we start out nor at the end of the road. Our help and healing will come to us as we go along the way.

After they realized they were healed, nine went on to see the priest; only one came back to thank Jesus. The other nine were focused on their pretty new skin, on the exciting experience of being normal, acceptable and cured. They were focused on themselves and what had happened to them. The one who came back to thank Jesus remembered the one who made it happen. The nine thought about the cure; the one thought about the cause.

Lectionary blog: Dying to self and loving the other

Lectionary blog: “Join with me in suffering”