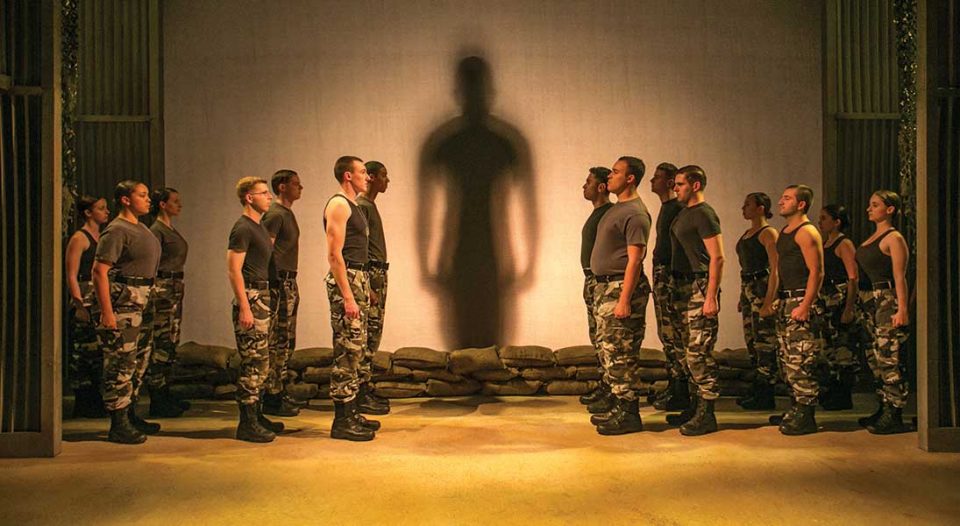 Scene from Under Fire: Stories of Combat Veterans Across Generations, an original play by Michael Arndt, a theater professor at California Lutheran University, Thousand Oaks.

Living Lutheran connected with veteran and playwright Michael Arndt of California Lutheran University, Thousand Oaks, on his original play, Under Fire: Stories of Combat Veterans Across Generations. Read on for Arndt’s insights on the veteran experience and learn how you can thank veterans in your community this Veteran’s Day.

Living Lutheran: What inspired you to write Under Fire: Stories of Combat Veterans Across Generations?

Michael Arndt: I was a combat infantryman in Vietnam from 1969-1970. I had been drafted in my first year of teaching high school in Minnesota after having graduated from Augsburg College. The experience of my one year “under fire” has been an important part of my subsequent life. In 2010, as part of my university sabbatical, I returned to Vietnam.

Before I left for Vietnam, I had a conversation with Tim O’Brien, author of The Things They Carried and other Vietnam-related novels. … He told me to be sure “to walk the steps that I walked” when I served in Vietnam. When I toured Vietnam, I specifically requested to return to the area where I had patrolled as an infantry recon soldier. Amazingly, I located a specific spot where I had taken a photograph 40 years previously. At that moment, I voiced the names of my friends who had served with me and had died and in some sense that action brought some closure to my war experience.

LL: How did the play come to fruition?

Arndt: When I returned to California from Vietnam, I began to think about ways to share my experience as a combat vet with my students in a meaningful way. Although I had written poetry, non-fiction, and spoken numerous times about my experience, I had never placed it in a dramatic context.

As I began reading and becoming more aware of the PTSD (post-traumatic stress disorder) struggles of combat veterans from Afghanistan and Iraq, I recognized a similarity of behaviors of veterans returning from the trauma of combat no matter what war had been fought. In spite of advances of communication, medicine, weaponry, and transportation, the human experience of war remains the same.

I applied for a small grant that linked me with two veteran organizations, The Military Order of the Purple Heart and The Military Order of the World Wars. Members of those organizations connected me with veterans whom I interviewed. The interviews included combat veterans from World War II, Korea, Vietnam, Iraq and Afghanistan. I used the interviews to shape a theatrical piece composed almost entirely of the words of the veterans.

In 2014 I received another grant to produce a performance of the work. I secured a composer, Christopher Hoag, who composed a wonderful score. The video from the interviews were edited and mixed with other content to provide a multimedia enhancement to the live performance.

LL: Who performed the play and when? Who was in the audience?

Arndt: The first performances were sponsored by the City of Ventura. The actors were a mixture of college students and community theatre actors. The audience was made up of mostly citizens of Ventura and representatives of local military bases as well as a significant number of veterans. Each performance was followed by a post-show talk-back with audience members in which veterans in the audience shared how the production got them to think about and share publicly their experiences.

The second set of performances were at California Lutheran University in November of 2015. With a cast of 21 student actors and full design support, the Theatre Arts Department produced a one and one half hour production that played for 13 performances. As part of the rehearsal process, the student actors participated in four weekends of boot camp led by a former Marine trainer.

The play was chosen by the freshman seminar class and all freshman students at Cal Lutheran were required to attend as well as read the play and supporting materials. The sold-out audiences included, in addition to the freshman class, other students from the university, community members and significant numbers of veterans. There were again post-show discussions that were meaningful for veterans in the audience as well as the cast of the play.

One of the veteran audience members at the production who was a former military chaplain and Melissa Maxwell-Dougherty of the University connected me with the office of chaplaincy for the ELCA. That connection led to an invitation to perform for the annual chaplain’s convention, this year held at Navy Base, San Diego, Calif. On June 20, 2016, the play (with many of the original student cast) was performed there and sponsored by Cal Lutheran, the ELCA, veteran groups and individual donations. The audience was composed mostly of conference attendees but also included local church members and other veterans. A post-show discussion again followed the performance.

LL: How was the show received?

Arndt: In each of its venues, I have been surprised and moved by the quiet attention given to the play in performance. The play has generated laughter as well as tears.

What has been most amazing is what happens after each performance. Veterans who admitted that they have never really spoken about their combat experiences shared publicly for the first time things that the play reminded them of.

A student actor’s step father had never talked to his step son about his Iraq war experience and after a performance broke down and for the first time the two connected over the experience.

My 18- to 22-year-old student actors really understood that the World War II and Korean and Vietnam vets that they portrayed at one time were young people just like they are now, but those young people went to war. That was especially meaningful to them.

My favorite reaction was when [the military chaplains] in the audience remarked that they recognized in the performances of my student actors persons that seemed like the soldiers that they daily counseled.

LL: What do ELCA members need to know about veterans, especially our more recent veterans who are young adults?

Arndt: Veterans of all ages, especially combat veterans, experience something that very few people in the world will ever experience. And for most of them, this experience is really difficult to share with other people.

Combat veterans return to normal life and cannot adjust readily because their normal was filled with fear, loud noise, tension, fire fights, patrols with the constant threat of IEDs (improvised explosive devices), the taking of human life, injury and death. To explain what that felt like that to a family member or friend or other civilian is as difficult as a mother trying to explain what giving birth is like to a man. The trauma of combat is intense and is carried back when a person leaves the military.

Too often, PTSD symptoms are diagnosed as a disease treatable only by drugs. Sometimes this drug treatment only adds to the trauma and creates other problems. In my generation—because of the draft—the military was filled with a wide cross section of economic, educational and racial personnel. When we returned, though many of us struggled, by-in-large our education and social status allowed us to integrate back into society.

Many of the modern volunteer service personnel joined the military as a means of securing income, education or a change of life style in addition to desiring to do something for their country. Unfortunately, when they return to civilian life, these young vets are more invisible than veterans of my generation.

At Cal Lutheran, very few of my upper middle class students personally know a friend who has served or is serving in the military. It is easy for current combat veterans to disappear from public awareness and because many don’t have the educational or socio-economic resources to seek assistance, they struggle alone.

The numbers of those who are incarcerated, those who suffer from drug and alcohol abuse, those who have experienced a breakdown of families, and the high number of suicides among modern vets should be alarming to an American citizenry for whom these young men and women have placed themselves in harm’s way. We are at the tip of the iceberg when it comes to the long-term effect our wars have had upon our young veterans.

As an important part of the fabric of American life, churches and church members should be actively involved in helping to seek solutions to the problems of veterans across generations.

Editor’s note: As part of the 2016 ELCA Churchwide Assembly, voting members passed a memorial to support military personal, veterans and their families. That memorial called congregations to raise their voices in prayer for all who have served in the U.S. military each year on the Sunday closest to Veteran’s Day. For prayer and action resource, visit elcachaps.com.