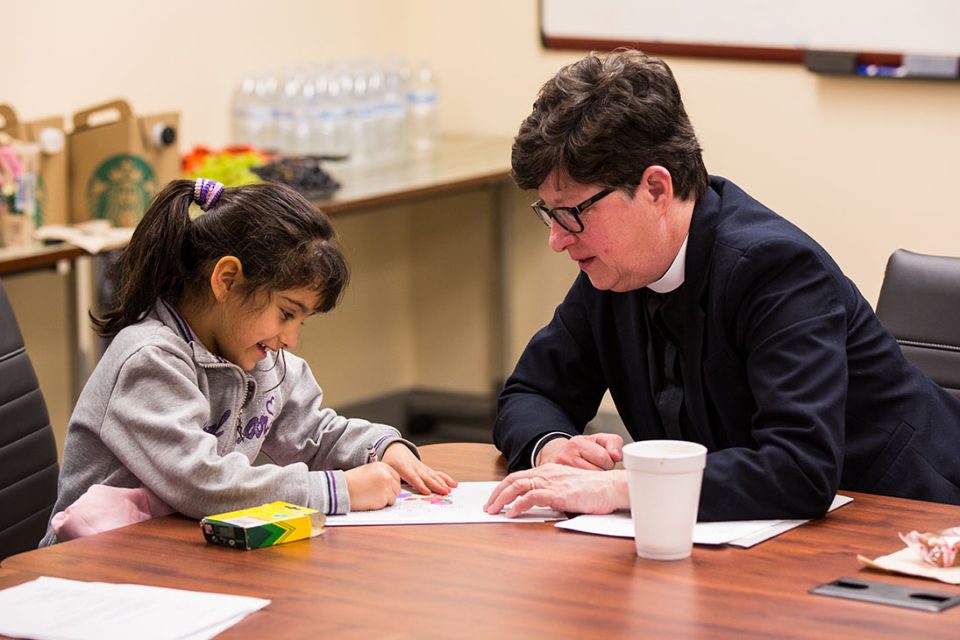 Presiding Bishop Elizabeth Eaton colors with Dalal, a 6-year-old refugee from Syria, during a visit to RefugeeOne.

ELCA Presiding Bishop Elizabeth A. Eaton met with refugees in Chicago March 21 during a visit to RefugeeOne, an affiliate partner of Lutheran Immigration and Refugee Service. RefugeeOne is the largest full-service refugee agency in Illinois and has resettled more than 16,000 refugees since 1982.

“The people we met at RefugeeOne just wanted another chance. A chance for freedom, a chance for a better life for their children, a chance for peace,” said Eaton. ““They were working hard to learn English and learn a new trade.”

Walking alongside refugees once they land in Chicago, RefugeeOne provides a furnished home, English classes, job search support, mental health care, after-school programming and mentors to help refugees as they seek to build a new life in the United States.

While touring the agency, Eaton stopped by a classroom to greet those who were gathered for an English lesson.  The refugees, from countries including Syria, Afghanistan and Iran, introduced themselves to the bishop and told her how long they had been in the United States.

Later, Eaton met with three refugees who talked about the reasons they left their home countries and what life is like for them since they have settled in the United States.

Soon after the outbreak of the civil war in Syria, Mohmoud Alnajar Syria and his family fled to Jordan, staying in the Za’atari refugee camp for three years. After a year and a half waiting for their refugee application approval, the family arrived in Chicago in June 2016.  Syria is learning English and has a job working for a food distribution company.

“When I came to the United States, I felt it as something totally different from our country,” said Syria through an interpreter. “There is peace, there is human rights for everyone and there is safety for my children.”

Syria, who has a daughter with disabilities, emphasized the access to good healthcare and medicine in the United States, something the family struggled to find in Syria and Jordan.

Ritah Mbabazi, who is gay, left her home country of Uganda out of fear of persecution. In 2009, amid growing anti-gay sentiment, the Ugandan government attempted to pass a law banning homosexuality. Mbabazi travelled to Kenya where she applied for refugee status.  After waiting almost 2 years, Mbabazi finally arrived in Chicago in Oct. 2016.

“Before I came here I thought I would never be successful,” said Mbabazi, who recently completed a hospitality training program and is interviewing for a hotel job.

“My dad used to say I would never have anything in life, but now I’m seeing myself as a different person. Five years from now I’m sure I’ll be successful.”

Naser Ahmed Bin Rashed Ahmed left his home country of Burma, because as a Muslim he and his family were not accepted as citizens. After 17 years in Malaysia, Ahmed, his wife and 5 children arrived in Chicago In Sept. 2016.  He has a new job as a food handler with a food distributor.

“Before, we have no country but we come here and we have a country,” said Ahmed through an interpreter. “My children have a school. I started a job three weeks ago and I like it.”

“Their faces shone when they spoke about the United States,” said Eaton. “They are looking forward to the day when they can become citizens. I couldn’t help thinking about my mother’s parents who came to this country almost 100 years ago. There is nothing to fear from these people. They are going to be great neighbors.”

“After 5 years I can become a citizen,” said Ahmed. “After becoming a citizen my life and my children’s lives will be perfect.”

Syria said he’s trying hard to adjust to his new life and learn English as quickly as possible. “After that I will apply for citizenship to be the best citizen I can be.”