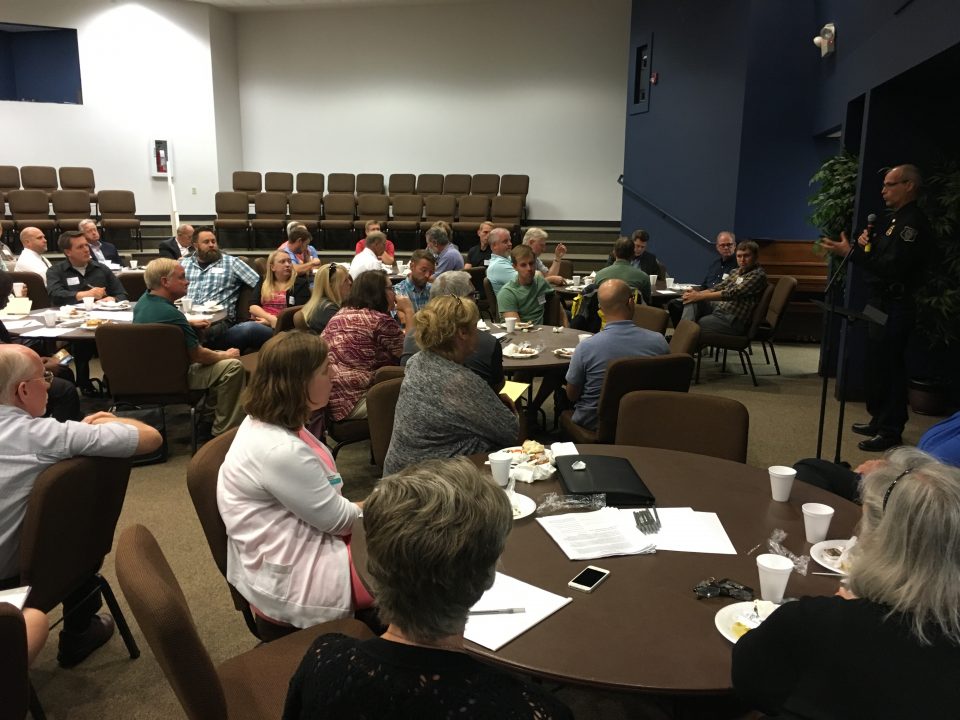 Pastors and church leaders in Sioux Falls, S.D., gather every few weeks for educational forums to learn about different aspects of the community through Empower Sioux Falls. Galen Smidt, the assistant chief of police at the Sioux Falls Police Department, spoke at the kickoff luncheon. Credit: Courtesy of Kevin Ludwig

People living in poverty in Sioux Falls, S.D., are receiving unprecedented attention from Christian church leaders of all denominations across the city. Their action plan calls for collaboration to help lift residents out of poverty.

In an unparalleled move for Sioux Falls faith leaders, Lutherans, Methodists, Catholics, Baptists, Evangelicals and nondenominational church leaders are uniting to help the city’s most vulnerable residents. Historically, churches have been the go-to places for those in need of food and shelter. The focus now is to address the broader picture—together.

The poverty rate in Sioux Falls, the state’s largest city, is 13.8 percent, which exceeds recession-era levels, according to Rich Merkouris, senior pastor of King of Glory, a nondenominational church in Sioux Falls. Some of those most affected are children, with more than 11,000 children in the Sioux Falls School District qualifying for free or reduced-price lunches.

While not wanting to create another non-profit or duplicate services already offered, leaders of Empower Sioux Falls were moved by the Holy Spirit and the apparent need in the community to find ways to be the hands and feet of Christ together, said Randy Gehring, a pastor at Our Savior’s Lutheran Church, Sioux Falls. A member of the leadership team, Gehring said they recognized they could accomplish more by joining efforts and resources than by standing alone.

“A wonderful side benefit of such a movement is that the public witness we give to the world is one of unity and compassion rather than disunity and squabbling over doctrine,” Gehring said. “I like [this] witness much better.”

About 6 months old, the program has seven congregations that have signed on as formal partners, and nearly 40 of the city’s 230 congregations have participated in some fashion, said Merkouris, who helped found Empower Sioux Falls.

“We realize that in order to really help people move out of poverty, we need to do more than provide things such as shelter and food,” Merkouris said. “This effort is meant to take current ministries to the next level of care and also initiate new focuses on the issue of poverty.”

To date, leaders have been focused on the education plank of their strategy, trying to raise awareness among church leaders of the realities of poverty in Sioux Falls. To that end, they sponsored a number of forums in which they defined poverty and described what it looks like in Sioux Falls. They’ve also tried to identify what individual congregations are already doing in response to the reality of poverty.

“A wonderful side benefit of such a movement is that the public witness we give to the world is one of unity and compassion rather than disunity and squabbling over doctrine.”

Empower Sioux Falls has chosen, as its short-term focus, the need for mentors for school-aged children.

“Our superintendent has shared with us that there are over 600 kids on a mentor waiting list, and if we use existing programs and agencies already set up for training and matching mentors, we feel we can make an immediate impact that would have lasting effects,” Gehring said, adding that the book by Robert Putnam, Our Kids, influenced their approach.

Paul Stjernholm, a pastor at Peace Lutheran Church, Sioux Falls, said Empower Sioux Falls is definitely on the right track with collaboration among churches as its centerpiece.

Peace Lutheran is one of three congregations working on a pilot program to make preschool available to low-income families. A small portion of the target number of kids in need of preschool could be folded into existing preschools, Stjernholm said.

“To reach the target number would require starting a new preschool at our newest Lutheran church, but the cost to do so is more money per child than Empower Sioux Falls has been able to raise,” he said. “I really think they are on to the right idea … help the kids most at risk to be successful at school by starting them early. A gift of an additional $20,000 for the upcoming school year could make that new preschool a possibility.”