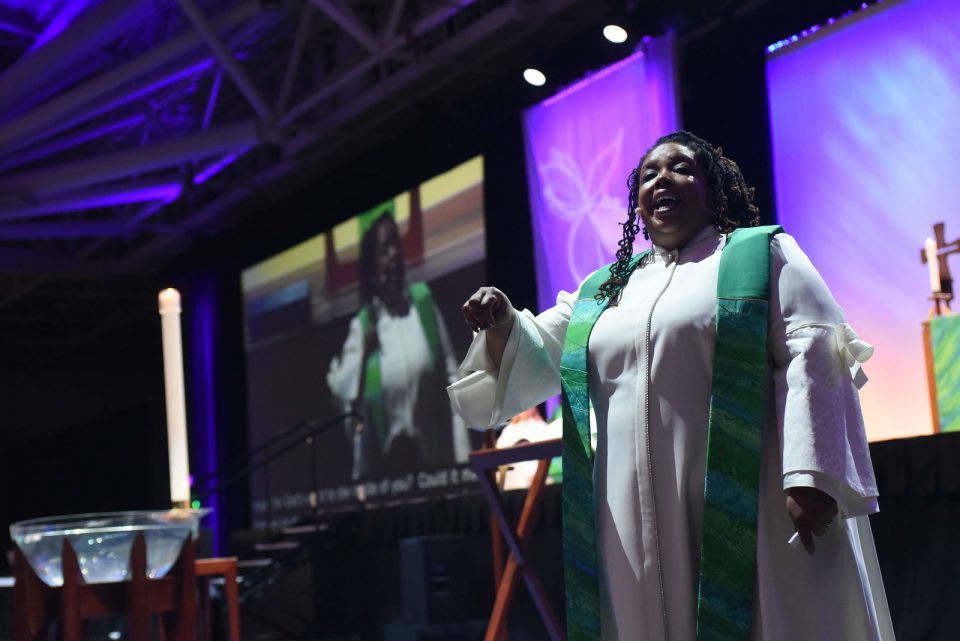 In her sermon during closing worship of the Women of the ELCA Triennial Gathering, Angela Khabeb, pastor of Ascension Lutheran Church in Waukesha, Wis., alerted those assembled: “News flash. Christianity is not comfortable. If you are comfortable in Jesus, you are doing it wrong.”

Reflecting on the day’s Gospel, the parable of the sower and the seeds from Matthew 13, Khabeb said the focus of the story is the harvest and the ways God chooses to “use the terrain of our hearts” to plant the seed of God’s word. Khabeb recalled Jesus’ words from John 12 that a grain of wheat must fall to the ground and die before it bears fruit.

“What does it mean for God’s word to die inside of you?” Khabeb asked as she walked among the front rows of the convention hall. “Could it mean that we must release the God that we have created? The God that we have fashioned in our own image?

“When we have God all figured out, then God belongs to us and not the other way around. But when that seed dies in your heart and begins to take root, then you belong to Jesus. Isn’t that what it’s all about?”

Khabeb underscored the point that the seeds of God’s love are intended for all, comparing the farmer in the parable to Oprah Winfrey. “You get some seeds, you get some seeds, everybody gets some seeds,” she shouted to laughter and applause.

When people first heard the story from Jesus, Khabeb said, “they were like, what? Those people over there? They get some [seeds] too? Yes, that’s right. Because otherwise God would be the God of just us and not the God of the universe. See how that works? God cannot be God of the universe if the seed does not fall on everybody.

“When we do this thing together, everybody gets blessed. That’s how you know God is in it.”

The Women of the ELCA Triennial Gathering was held July 14-16 in Minneapolis. About 3,400 participants attended the event, which included about 1,300 first-time attendees.