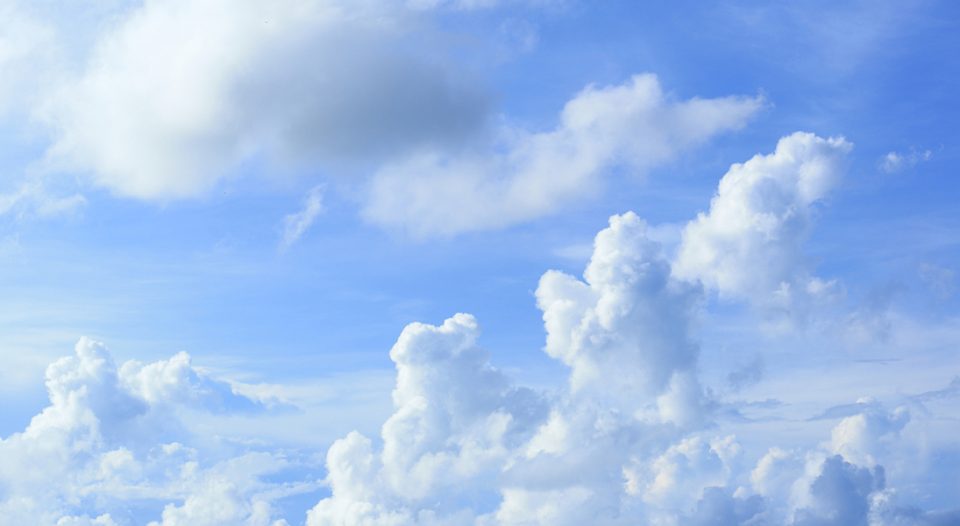 Peanuts cartoon: Linus and Charlie Brown are on their backs on the pitcher’s mound, staring up at the clouds. Charlie Brown says, “Linus, do you ever see anything in the clouds?” Linus says, “Why, yes, Charlie Brown, I do. For instance, that one over there bears a striking resemblance to Michelangelo’s depiction of the creation on the ceiling of the Sistine Chapel. And that one over the school, that looks like a map of Scandinavia. See—there’s Denmark and Sweden. And that one there, over the water tower, looks like a helix. Do you ever see anything in the clouds, Charlie Brown?” Charlie Brown frowns, and then says, “Well, I was going to say a ducky and a horsey, but I changed my mind.”

Every time I read biblical stories like Elijah riding off in a chariot of fire or Jesus being transfigured on the mountain, I feel a bit like Charlie Brown. I have had no real mountaintop experiences of the holy in my life, just the plain, ordinary cycle of Sunday service and daily prayer and going to work—day after day, week after week, year after year. I have had a hard time making sense of these stories because I also inherited a skeptical attitude from my father. As my mama said, he “took all the fun out of watching a magician on TV.” He would offer several mechanical and slight of hand explanations of anything the magician did. “It ain’t magic,” he would say, “just physics, just plain old physics.” So, my natural inclination is to discount the importance of these stories or to try to find an explanation that takes the magic out. But these stories are too important to ignore and impossible to explain with science – so we must find a third way to look at them.

Several years ago, biblical scholars Marcus Borg and Tom Wright wrote a book about Jesus. Borg is a liberal and Wright is not, and the book consists of alternating sections where they politely disagree with one another. Borg talks about what he calls “the relationship between history remembered and history metaphorized.” His point is that there are actual things that happened that were remembered and turned into stories like Elijah and the chariot of fire and Jesus being “transfigured” on the mountain. For Borg, denying that it ever took place, or arguing that “God can do anything,” or trying to explain the physics of how it happened, are all a waste of time and energy. Our efforts are better spent looking at how those who remembered the story made use of it to proclaim religious and spiritual truth. So, if we step away from trying to prove or disprove the Transfiguration, and take this story as history turned into metaphor—what was Mark trying to tell us by telling us this story? What can we learn from this?

On the first Sunday after the Epiphany, we celebrated the baptism of Jesus, at which a voice came from heaven, proclaiming, “You are my Son, the Beloved, with you I am well pleased.” Today, we hear another voice, saying almost the same thing, but instead of speaking to Jesus, this time the voice speaks to us and gives us a command: “This is my Son, the Beloved, listen to him!” This has been the message of Epiphany—”This is my Son, listen to him!”

So, if we step away from trying to prove or disprove the Transfiguration, and take this story as history turned into metaphor—what was Mark trying to tell us by telling us this story? What can we learn from this?

Week after week, Mark shows people responding to what Jesus does with excitement and listening to what Jesus says with astonishment and obedience. His actions and his words show us who he is and call us to listen and follow. The Transfiguration is the midpoint of Mark’s Gospel. Everything until now has been laid out to show us who Jesus is and how we are to respond to him. Both Moses and Elijah had mountaintop experiences with God; both encountered God as fire and were transformed in the experience; both came away changed and empowered. Moses symbolized law and Elijah represented the prophets to the Jewish people. And on this mountaintop, Mark shows Jesus inheriting their roles, taking on their mantles and going beyond what they did in order to do even more. Here Mark makes clear Jesus is the One, the Messiah, the Son of God, the Son of Man, the Christ, the Savior.

Mark also makes clear that this is not the end of God’s mighty act in Christ; it is just the beginning. This is chapter 9 of 16. Over the next eight chapters, Jesus sets his face toward Jerusalem, toward the temple, toward Pilate, toward the cross. When Peter, dear Peter, suggests that they build tents and stay where they are, he is saying, “Well, I guess that’s it. I can die happy now. It is finished.” He was a bit premature. As Mark drily says, “He did not know what to say,” but being Peter, that did not stop him from saying something.

We are like Peter. We keep trying to find a good stopping place, a place where we can say “It is finished. We’ve achieved it. We’ve fulfilled our promise as a Christian, as a congregation, as a denomination. Let’s just sit on our laurels and stay here.” Or, what’s worse, we try to return things to the way they were, building a tent for a remembered time when things were better and stay there. And we can’t. Jesus will not let us sit still. We are called to follow Jesus back down the mountain, back into the world, back down where the people are still lost, still hungry, still in need of love and compassion. We are called to follow Jesus on the way of the cross.

Which is related to the third thing Mark is telling us with his version of this story. After the voice speaks, all traces of the incident have disappeared. Moses and Elijah are gone; Jesus is no longer ablaze; the voice is silent. The disciples look at each other and silently plead with Jesus, “What was that all about?” And Jesus puts his finger to his lips and says, “Shh! Don’t tell anybody about this until after I rise from the dead.” “What? Why? Huh? What is he talking about?”

Jesus’ preaching and teaching are a call to repentance, a call to change directions, a call to join the kingdom of God—a call that he knows is leading to the cross. Coming back down the mountain is the first step on the trail to Calvary’s mountain, not only for him but for many. It is important that people do not get so blinded by the spectacular that they cannot see where their commitment and obedience are leading them. It is only after trusting in the promise of the resurrection that most of us will have the courage to walk the way of the cross. It is only after Jesus has been raised that the Transfiguration make sense as a promise and a sign of that new tomorrow.

And so, like Linus and Charlie Brown, we wander through life trying to make sense of what we see. Sometimes, like Linus, we see wonderful, beautiful, complex things. More often, like Charlie Brown, we see only duckies and horsies. But through it all, with the eyes of our hearts enlightened, we can see the risen Christ all around us—in those who love and help us and in those whom we love and help in Jesus’ name.

Lectionary blog: On the shoulders of giants