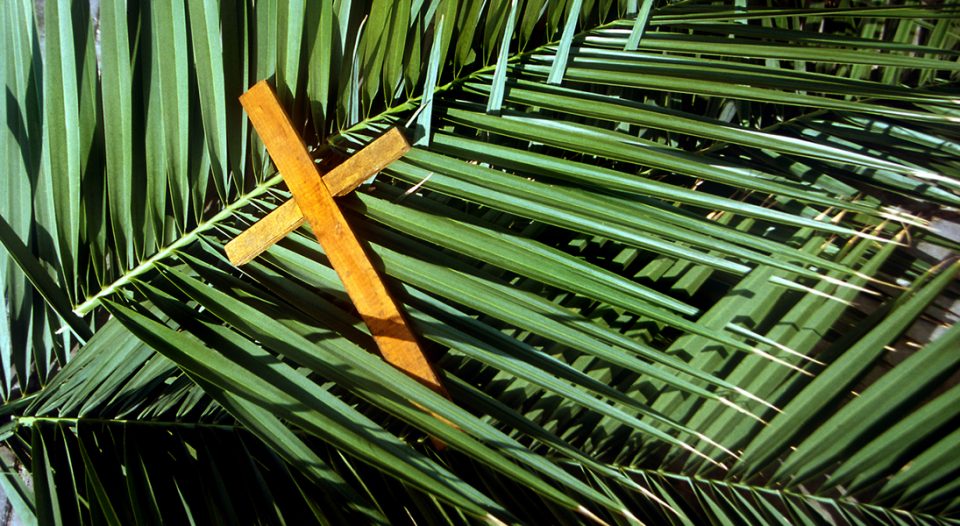 Wooden cross on palm leaves, Palm Sunday. This was shot in Jerusalem Israel the palm leaves are indigenous to the Holy Land. Palm Sunday is a Christian moveable feast that falls on the Sunday before Easter. The feast commemorates Jesus' triumphal entry into Jerusalem, an event mentioned in all four canonical Gospels.

This can be a confusing day. Almost no one actually calls it the Sunday of the Passion; we prefer Palm Sunday. Its official name on the church calendar is Sunday of the Passion, with Palm Sunday in small print (ELW, p.29). Palm Sunday is fun, in a nerdy, church kind of way; we start outside, we wave palms, we march into the nave to the stirring tones of “All Glory, Laud, and Honor!” It’s uplifting to join in praising Jesus, to participate in the joy of welcoming the Messiah, the Christ, the Savior, into the world, into our community, into our hearts and lives.

On the other hand, the Passion is an incredibly painful and solemn story: betrayal, rejection, abandonment, beatings, torture, death. A few years ago, a young woman who was not a regular church-goer accompanied her boyfriend to the traditional Good Friday service in the congregation I was serving. Afterward she told him, “Gosh, that was a downer! That was the saddest thing I ever heard.” Indeed.

These two seemingly disjointed and unconnected themes are brought together in our second lesson. In Philippians, Paul weaves the joy and the sorrow together into a seamless whole: When Jesus entered Jerusalem riding on the foal of an ass, no one looked upon him and said, in the words of the Nicene Creed, here comes “Jesus Christ, the only Son of God … God from God, light from light, true God from true God” (ELW p. 104), but they did think he was someone extraordinary sent by God to be their Messiah. It was only later, as they reflected on the events of that day and the things that happened in the week that followed, that the followers of Jesus began to understand what had happened.

“Let the same mind be in you that was in Christ Jesus, who, though he was in the form of God, did not regard equality with God as something to be exploited, but emptied himself, taking the form of a slave, being born in human likeness. And being found in human form, he humbled himself and became obedient to the point of death – even death on the cross” (Philippians 2:5-8).

A couple of hundred years later, the Nicene Creed put it this way; “For us and for our salvation he came down from heaven; … For our sake he was crucified under Pontius Pilate; he suffered death and was buried” (ELW p. 104).

Paul uses two important words. The first is “exploited.” This is the only place in the Bible that this Greek term is used, and it usually refers to grasping or clinging desperately to something like “the spoils of war,” or “plunder,” or “loot.” Paul’s use of this word helps us realize that the eternal Christ did not casually take off his robe and crown and put on “peasants garb” in order to go slumming with the hoi polloi, the little people. This is not a celestial version of The Prince and the Pauper. In Paul’s view, Jesus was “equal with God,” but vigorously, almost violently, pushed aside and gave up that status for the sake of humanity—exchanging equality with God for “less than” equality with humans, “taking the form of a slave.”

The other important term is emptying—”kenosis.” In Philippians 2:3, Paul said to “do nothing from … conceit.” Conceit in Greek is “kenodoxia,” literally “empty glory.” In 2:7, Paul engages in a bit of rhetorical word play; instead of being puffed up with “empty glory,” Jesus was, Paul says, “emptying himself of real glory.”

On this Sunday of the Passion/Palm Sunday, we are called to follow Jesus to the cross. We are called to let go of importance, status, striving after position, the winning of arguments, and staking out our territory in the controversies of the church and in the world’s political landscape. If we are to follow in the footsteps of the Prince of Peace, if we are to join with the Christ in the struggle to move the entire world from being a community in conflict to becoming a community in Christ, then we must begin the process by emptying ourselves of our pride, our prejudice and our position. We must die to all those things so that we may live in Christ.

If we are to follow in the footsteps of the Prince of Peace, if we are to join with the Christ in the struggle to move the entire world from being a community in conflict to becoming a community in Christ, then we must begin the process by emptying ourselves of our pride, our prejudice and our position. We must die to all those things so that we may live in Christ.

And here is the truly hard and scary part: If we are to really follow Christ, we must, not only give up our wrong positions, thoughts and actions, but also trust the grace of God enough to give up defending our right positions, thoughts and actions. Remember, Jesus did not empty himself of bad stuff. He didn’t give up a bad temper and fried foods for Lent. Jesus let go of his rightful prerogatives and position as the Son of God, the Creative Word, the Second Person of the Trinity. Jesus emptied himself of all that and became not only human but a servant, a slave, a nothing and a nobody. “He humbled himself and became obedient to the point of death, even death on a cross” (Philippians 2:8).

If we desire that our communities of faith become the sort of communities the gospel calls us to be, we must be willing to die to ourselves, and our self-interests, and our personal agendas and causes. We must die to those things so that Christ can live in us, individually and collectively. It’s this simple: If we are full of ourselves, there’s no room for Christ.

If we are full of our plans, our programs, our ideas, our needs, our wants, our desires, our abilities, and our notions of what needs to be done, and how it can be done, we may very well be a highly successful “religious organization,” but we will most certainly not be the church, the body of Christ in the world. The only way for us to be the church is to follow Christ in giving up our power and taking up the mantle and mission of a servant. For us to be the church requires that we strip ourselves naked of any trappings of prestige and influence, take up our cross and follow Jesus wherever that may lead.

It is one thing, an admirable thing, an important thing, to suffer for your faith because you are defending an important principle; you have stood up for your faith and have been attacked and knocked down for it. But there is another, more important thing, the thing that Christ calls us to: to willingly sacrifice our rights, privileges and positions for the sake of the other. That is true cross-bearing; that is true emptying; that is true sacrifice. On this day, Christ calls upon the church to be a cruciform community, forged in suffering, cemented in sacrifice, a community of those who have died with Christ, so that Christ may live in them and in the world.

More than just waving in worship

The international language of music

The story behind “Unexpected and Mysterious”