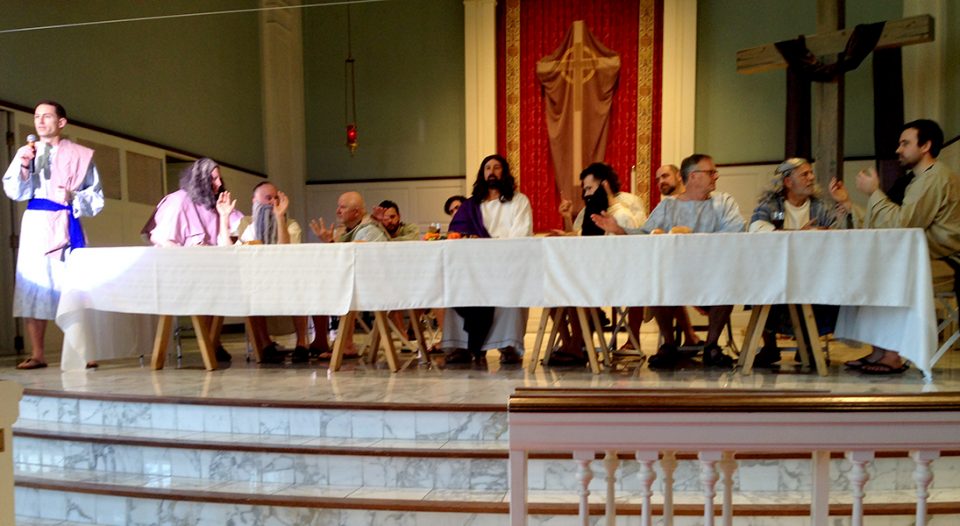 One of the most well-known works of art of all time, Leonardo da Vinci’s The Last Supper is also one of the most important and influential paintings to Christians worldwide.

In The Last Supper, da Vinci portrays the night before Jesus was crucified. It depicts Jesus at the center of the table, surrounded by the 12 apostles, the men he chose to be at his side that night. During this time, as Jesus was to share the bread and wine, he informed the apostles that one of them would betray him.

The story of the Last Supper is told in Lutheran churches everywhere during Holy Week. But one congregation took the opportunity to start Holy Week with a different way to tell it.

During its Palm Sunday services, Fox Point Lutheran Church, Fox Point, Wis., included what it called “The Living Last Supper.” It was a performance, of sorts, to give parishioners a more intimate look into the story of the painting through the voices of Jesus and the apostles.

Throughout the service, each apostle “came to life” from the painting and told his story, while the rest of the men remained still, as if they were in the painting. Each man gave the background of how they came to know and follow Jesus. Each ended his story in disbelief that one of the 12 would betray Jesus and shared the same worry: “Is it me, Lord?” The performances were done three at a time, just as the apostles are grouped together in the painting.

The idea of the “Living Last Supper” was brought to Fox Point pastors by longtime parishioner Arlene Erickson, who saw an ELCA congregation in Texas do something similar during Holy Week several years ago.

“It was such a moving piece and said a whole lot about what was happening the night before Good Friday,” Erickson said. “And because of that, we get the eucharist. Seeing it in that way completed the story for me.”

Lectionary blog: ‘The bread … is my flesh’