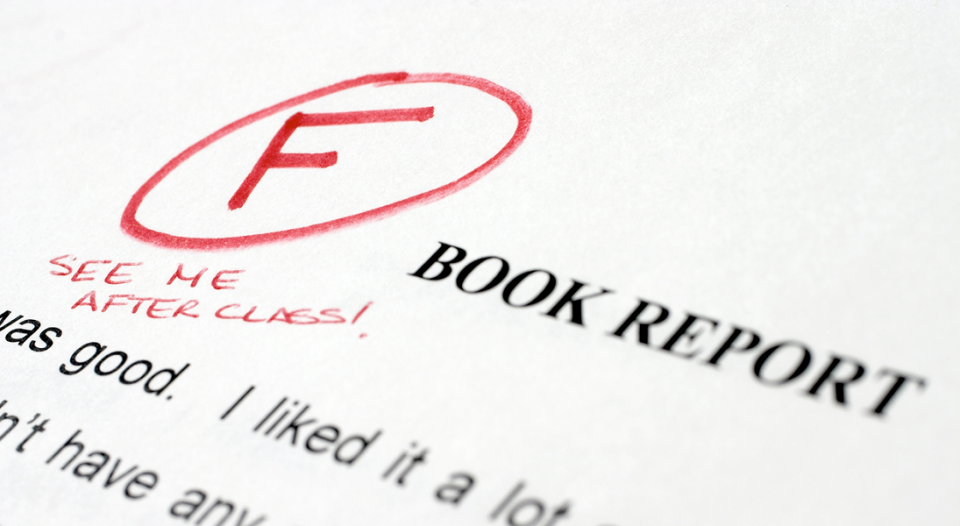 In high school I had a superb English teacher, a 45-year-old bachelor at the time, whom we affectionately called “Joe Baby” (but always behind his back). He had a stare that could surely crack granite. We always wondered if Joe Baby did anything fun with his free time except read William Faulkner, Mark Twain or Flannery O’Connor. He was a brilliant man who expected excellence from his young charges.

I once turned in a paper for him describing Huck Finn’s moral quandary with Jim (the runaway slave in Twain’s classic novel) and was later shocked to see a big red “F” at the top of the first page with a terse note that said, “Complete rewrite by Thursday.”

I wasn’t used to receiving such scarlet letters attached to my essays and spent a great deal of time revising and polishing the paper, using a thesaurus and several impressive high-dollar words. I recall feeling angry and a bit embarrassed.

He gave the paper back on Friday. Adorning the top of the page this time was another red “F” and this menacing message: “You’re able to produce much better work than this. Complete rewrite by Monday.”

I wanted to wring the little man’s neck and cursed him colorfully that weekend with the perceived justice of God on my side.

Joe Baby returned my third attempt on Tuesday with a blue “B+” at the top and another note: “This (the word was underlined) is what you’re capable of.”

I can’t recall a more infuriatingly demanding teacher, nor can I conjure a better one. What little I know about writing is largely attributable to Joe Baby.

Jesus stands before Pilate during Holy Week. He says: “For this I was born, and for this I came into the world, to testify to the truth” (John 18:37). Pilate replies, “What is truth?”

A good way to avoid the truth is to ask a question about the truth. When my wonderful wife of 36 years tells me something I’d prefer not to hear, a truth about myself that’s hard to stomach, it’s far easier to start a little diversionary argument of distraction.

A good way to avoid the truth is to ask a question about the truth.

If you ask most people on the street to tell you the mission of Jesus in the world, I suspect a strong majority would answer something like “to love us” or “to support us” or maybe “to protect us.” Here in John’s Gospel, however, Jesus says the central reason he came into the world is to “testify to the truth.”

It’s revealing how Jesus describes the devil, the false power we often dismiss with a pitchfork and pointy red tail: “the father of lies” (John 8:44). Fittingly, in the same chapter Jesus says, “You will know the truth, and the truth will make you free” (8:32). But the truth, if we’re honest, will also make us mad.

My old English teacher dared to tell me the truth about my sloppy, half-done writing. My response? I was furious with the man. Recall that Martin Luther King Jr., Dietrich Bonhoeffer and Oscar Romero, among many others, all died because they dared to tell fellow citizens in their respective countries the truth.

There has been a lot written lately about the advent of fake news. But I suspect it’s always been tempting to embrace false perceptions of ourselves and others, especially when the truth involves sacrifice and change.

I recall a story where several people on a retreat were asked by their weekend leader to think of someone who resembled Christ in their lives. A few people rose to describe an important relative who supported them in a past crisis. Others recalled friends who faithfully stood by them during an illness.

And then a woman who had been rather quiet during the entire retreat stood up timidly. “I had to think hard about this one,” she said. “I kept wondering: Who is it who loved me with a penetrating grace, bravely sharing the unfiltered truth about myself in a way that I wanted at first to kill him for it?”

Lectionary blog: The past is in the present

Lectionary blog: ‘As we forgive those …’