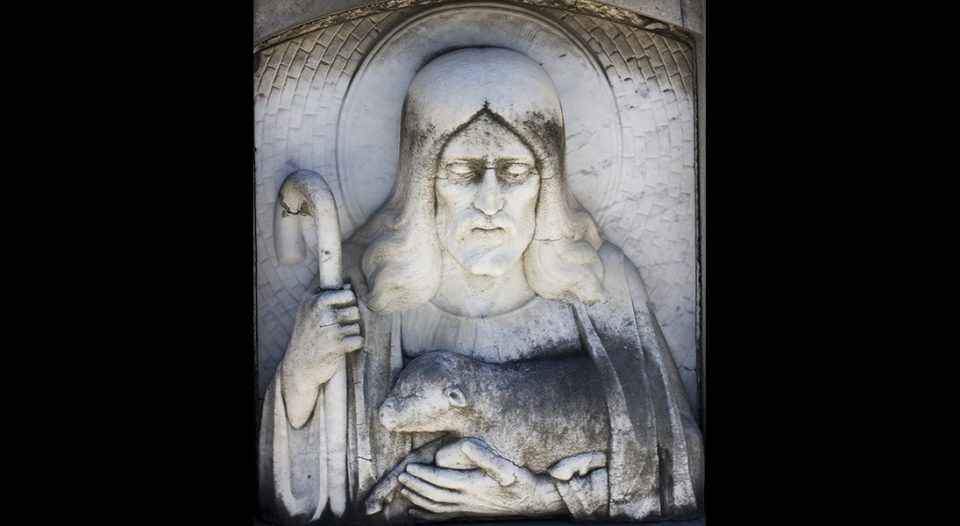 Today is the time for us to look up and follow the shepherd, follow in pursuing lives of love as selfless and risky as his.

“The hired hand runs away because a hired hand does not care for the sheep. I am the good shepherd. I know my own and my own know me” (John 10:13-14).

Jesus says he is “the good shepherd.” He contrasts being a “good” shepherd with being a bad “hired hand,” or, as the King James Version had it, “a hireling.” Some church traditions have an animosity toward professional clergy, calling them “hirelings.” They base their objections on this text, thinking a good pastor is one who imitates Christ in serving the people for love and not for money, and assuming if you are in ministry for money, you will abandon folk in time of trouble. And it must be admitted they have a certain point. In the real world, as most of us experience it, there is a difference in devotion and service between the “hirelings” and those with a commitment not rooted in finances.

I grew up on a family farm. We didn’t really have any “hired hands,” but Daddy would occasionally take on a local man to help out during the harvest. “Jim” would never accompany the family to the house for dinner, saying he had brought something to eat and would just rest in the shade of the barn while we ate. One day we came back to the fields to discover the mules had gotten loose from where we had tied them and were running through the tobacco, dragging the sleds behind, destroying the crop. Jim was sitting on a rock, watching and laughing. After we had gotten the mules under control, Daddy confronted him about letting the mules run wild. He snorted and said, “You don’t expect a man to chase after a mule for $2 an hour, do you?” Daddy set us to work while he took the man home, and that was the last we saw of the hireling Jim.

This image of the good shepherd is deeply rooted in the culture of the Middle East. For much of history the Israelites and their neighbors were nomadic folk, largely dependent upon their sheep for much of their livelihood. Their leaders were often referred to as the people’s shepherd. This image was especially strong in Israel, and calling the king a shepherd was often linked back to King David, the traditional author of the 23rd Psalm. David, a shepherd boy who became king, is the good shepherd by whom all kings were measured.

Unlike the pharaohs and emperors around them, who were held up to be gods on earth, the kings of Israel were not believed to be divine; they were known to be ordinary human beings who represented God on earth and ruled in God’s name. The idea was that God had placed the responsibility for the nation in the hands of the king. The kingdom was not theirs to do with as they pleased. The kingdom was God’s, and they were to take care of it and of God’s people in God’s name and with God’s help. And even great King David failed to do it right all the time.

Between David and Jesus, there were many, many years and many, many kings, and all the kings of Israel failed in one way or another. None of them lived up to the image of the true, the real, the “good” shepherd of Israel, especially not the emperor in Rome nor his puppet, King Herod.

In calling himself the good shepherd, Jesus was laying claim to much more than simply being kind and compassionate toward the people—Jesus was laying claim to kingship, was announcing that he was indeed the Messiah, the Chosen One of Israel. And the hirelings—the kings and leaders of the temple, those who were only in it for the money, those who actively fleeced the sheep yet turned tail and ran at the first sign of trouble—they knew what Jesus was talking about. And they hated him for it. And they killed him for it.

“…. because I lay down my life in order to take it up again. No one takes it from me, but I lay it down of my own accord. I have the power to lay it down, I have the power to take it up again” (John 10:17-18). Whatever the setting when these words were first uttered and written down, in this post-Easter time we cannot hear them without thinking of Jesus being arrested: “Am I not to drink the cup that the Father has given me?” (John 18:11), of Jesus on trial before Pilate, “You would have no power over me unless it had been given you.” (19:11), of Jesus with Mary in the garden and her report to the disciples, “I have seen the Lord” (20:18). Jesus laid down his life for the flock, for his followers, for us—and he took it up again, for his flock, for his followers, for us.

The picture of Jesus as the good shepherd, tied in with the beautiful poetry of the 23rd Psalm, can lull us into seeing these texts as simply a promise that whatever befalls us in life, God will be there to protect, comfort, guide, feed, look after and tend to us. And it is that. But it is not only that. It is also a proclamation that the revolutionary kingdom of God is here, now and that Jesus is the good shepherd of that kingdom, its Messiah, its Christ, its king.

Today is the time for us to look up and follow the shepherd, follow in pursuing lives of love as selfless and risky as his. The promise of the kingdom is not that this will be easy. First John tells us: “We know love by this, that he laid down his life for us—and we ought to lay down our lives for one another” (1 John 3:16). There is no assurance that we will not get hurt, no guarantee that we will not die. The only promise we receive is that where we go, the shepherd leads us and goes with us. In life, through death, into life eternal: “Yea though I walk through the valley of the shadow of death, I will fear no evil, for thou art with me” Psalm 23:4 (KJV).