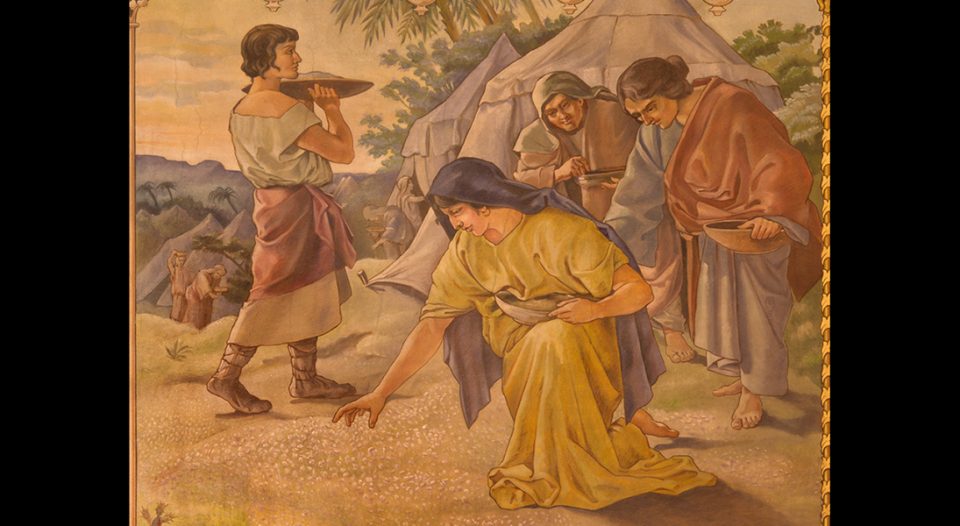 Trnava - The neo-gothic fresco of the scene Israelites at gathering of manna by Leopold Bruckner from end of 19. cent. in Saint Nicholas church.

“When the layer of dew lifted, there was on the surface of the wilderness a fine flaky substance, as fine as frost on the ground. When the Israelites saw it, they said to one another, “What is it?” For they did not know what it was. Moses said to them, “It is the bread that the Lord has given you to eat” (Exodus 16:14-15).

Almost every family has a relative, usually a great aunt, who is infamous for strange gifts. Think of poor Ralphie in the movie A Christmas Story getting a pair of pink Easter Bunny pjs from his aunt. They came complete with big feet, bushy tail and long ears. Though they were horrible, they were at least recognizable. Many times, it is almost impossible to tell what the bizarre present is—much less why anyone would think a child would want such a thing.

As you may have guessed, I had such a relative. My siblings and I were taught what to say when we received a gift from her, “Thank you. It’s very nice.” We were also taught, quite specifically, things we were not allowed to say. It was a long list, beginning and ending with “What is it?”

Apparently, the Israelites did not get the lecture from their mothers about the inappropriateness of responding to generosity with rude incredulity. God has dealt with their complaints and grumbling about not having enough to eat by providing them with food. I suppose they were expecting room service—trays appearing at their tent flap each morning laden with still warm baked bread, cooked meats hot off the spit, and a variety of fresh fruit and veggies. Instead, they got live quail—which they had to catch and kill and clean and cook—and also some bizarre, flaky stuff they had to go pick up off the ground.

Now, here’s an interesting bit of word play that becomes important in our reading from John’s Gospel: “What is it?” in Hebrew is the word “manna.” The doubting question becomes the name of the food; the dubious gift becomes the honored means of God’s provision for and salvation of Israel.

So in the somewhat convoluted and confusing conversation between Jesus and “the crowd,” some of these same dubious dynamics are at work. Word play abounds throughout this story but not in a humorous, joking, punning manner. Rather, the writer is exposing the meaning of Jesus by exploring conflicting understandings of the miracle and the manna.

The Gospel story begins after the feeding of the 5,000. Jesus and the disciples continue to be chased around the Sea of Galilee by “the crowd.” When the people catch up with them, Jesus gets a little testy, accusing them of looking for him because they want more bread, “because you ate your fill of loaves” (John 6:26) and admonishing them to work for “food that endures for eternal life, which the Son of Man will give you” (6:27).

And the crowd responds, “Manna? What is it?” What is the work we are to do? What is the sign that you will give us? What work are you performing? “Our ancestors ate the manna in the wilderness; as it is written, ‘He gave them bread from heaven to eat’” (6:31).

Jesus then makes the critical rhetorical turn of asserting that it was not Moses but the Father who gave them the bread. And that it was not just any bread, it was “the bread of God which comes down from heaven and gives life to the world” (6:33). When the crowd then asks for this bread, Jesus makes the jaw-dropping assertion that “I am the bread of life” (6:35). I am the manna, I am “What is it?”

Many people in Israel had, for many, many years, been looking for the true “bread from heaven,” a Messiah, a Savior, a Christ—a person sent from God to rescue them from a desperate and hopeless situation. Most of the folk who hoped for such a person imagined someone along the lines of the great poet and warrior king David, someone who would both rout the Romans and renew the spiritual heart of the nation. What they did not expect was a man like Jesus, a peasant preacher, a rambling, homeless miracle worker who slept outdoors and mooched free meals and wine off friends and admirers. “What is it?” “Who is this?” indeed.

How often have we been like the Israelites in the wilderness—not only complaining to God about our situation but also having a specific way we expect God to respond and fix our problem? And when God’s answer was so different from what we wanted, how often have we thought, “What is it?”

And how often have we been like the crowd chasing Jesus around, expecting our faith to lead to happiness and prosperity, on our own terms, in the way we want to be happy, in the way we desire to be prosperous? We want our “daily bread” served up to us on a silver platter, cooked according to our instructions. Instead, we get quail complete with feathers and droppings; we get flaky stuff scattered about on the ground, “bread” that must be gathered and cleaned before it can be eaten; we get Jesus and a burden that must be taken up and carried as we follow him on his way, the Christian way, the way of the cross.

What is it, this Christian life? Well, it probably isn’t what most of us expected. If we fully embrace following Jesus wherever that leads us, we will at times feel as ridiculous at little Ralphie, standing on the steps in pink bunny pjs. No, it’s not exactly what we asked for—but it is exactly what we and the world need.

What Lutherans mean when we talk about daily bread

Lectionary blog: What will we do with the gift?