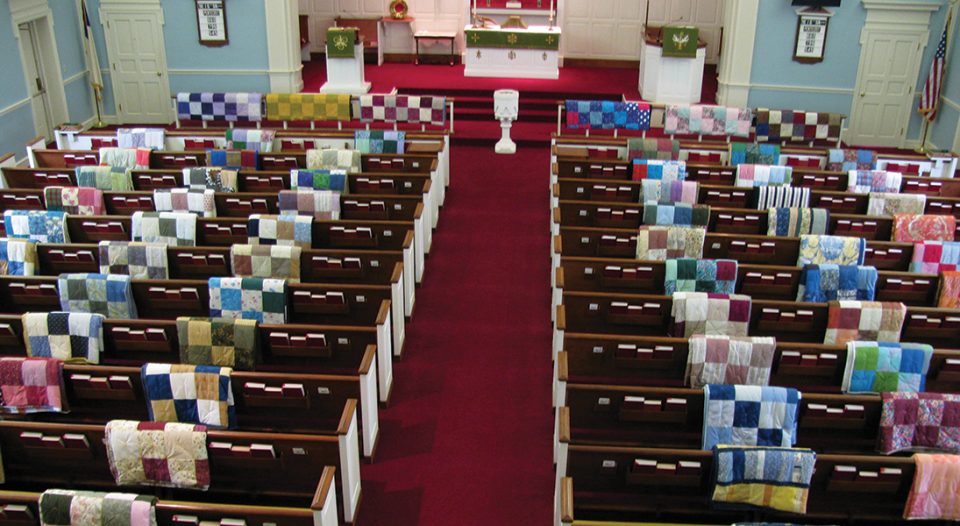 In 2016, Kate Yelvington, secretary of Bay Shore Lutheran Church in Whitefish Bay, Wis., needed a photograph for a bulletin cover on Lutheran World Relief (LWR) Quilt Sunday. The congregation’s quilting group, the Cover Girls, was displaying its blankets on the backs of the pews before sending them to LWR, but no one had a photo of the display.

Yelvington found a photo online of colorful, handmade quilts draped over pews in a sanctuary that looked a lot like Bay Shore’s. She said her church has a plain sanctuary patterned in the Williamsburg style with blue walls and carpet and no stained glass.

The sanctuary in the photo she found belongs to Trinity Lutheran Church in New Holland, Pa., and the quilts were made by its Trinity Quilters. Yelvington calls finding the photo a “Holy Spirit moment that was meant to be” because she and others haven’t been able to find it online since.

Yelvington gave photo credit to Trinity, and the Cover Girls decided to send a copy of the bulletin to the Trinity Quilters. The two quilting groups then began corresponding.

Karin Freimuth, a member of the Trinity Quilters, said the two groups found they had many things in common, including the style of their church buildings and that they both donate quilts to LWR.

After corresponding for two years, the Trinity Quilters began talking about taking a road trip to visit the Cover Girls. “Never in a million years did I think they would ever do the road trip,” said Sandy Lee of the Cover Girls.

But this year, Freimuth, along with fellow Trinity Quilters Theona Waxborn, Doris Huntsberger and Andrea Dukeman, embarked on an 18-hour drive from Pennsylvania Amish country to Wisconsin, arriving June 1 for a four-day visit.

Throughout their time together, the Cover Girls treated the Trinity Quilters to a tour of their Lake Michigan area, a Wisconsin traditional German fish fry, and a visit to the Wisconsin Museum of Quilts and Fiber Arts in Cedarburg, Wis.

The two groups also worshiped together and participated in a show-and-tell, sharing some of their recent projects. The Trinity Quilters brought two banners—one they made to commemorate the 500th anniversary of the Reformation and one for Easter. Each Cover Girl brought something they made or that was in the works.

Freimuth said approximately 15 Trinity Quilters have met once a week since 2005. They use a specially made frame that accommodates nine quilts and always have their creations on display in the fellowship hall.

Freimuth said they send their quilts to LWR because it’s a worthy cause. Thanks to the quilts being barcoded, they know many of the them have gone to African countries, where they are used as blankets, coats, room dividers, roofs or carryalls.

“It’s being a small part of something huge,” Freimuth said. “Our 120 quilts will be part of the distribution of more than 576,000 quilts annually that will help those who desperately need warmth and shelter, and [they] will know that someone cared and specially handmade their quilts.”

Lee said the Cover Girls have 10 to 12 quilters and have met twice monthly since 1976. For about 20 years they have sent 40 to 60 quilts per year to LWR. Three quilts are on display in the church, and there are boxes where the congregation can donate fabric.

“It’s being a small part of something huge. Our 120 quilts will be part of the distribution of more than 576,000 quilts annually that will help those who desperately need warmth and shelter, and [they] will know that someone cared and specially handmade their quilts.”

The connections formed during the quilting groups’ time together deepened their friendship. Lee said the connection has evolved beyond quilting as they now also share news and updates on other ministries and congregational life activities.

“It was such a happy feeling that the Pennsylvania group was willing to travel so far to meet us,” Lee said, adding how nice it was to meet in person after years of phone calls and written correspondence.

Freimuth agreed: “When we finally met the Cover Girls, it was like we were meeting long-lost relatives. The weekend was filled with lots of laughter, conversations and sharing while realizing the whole time that God had his hand in this meeting of like-minded women.”

Both groups say they plan to continue their correspondence.

“We came away with renewed energy and a new commitment to serve God by providing quilts for those in need throughout the world,” Freimuth said.

Linda Masters
Masters is a retired journalist and charter member of Christ by the Lake Lutheran Church, Bull Shoals, Ark.