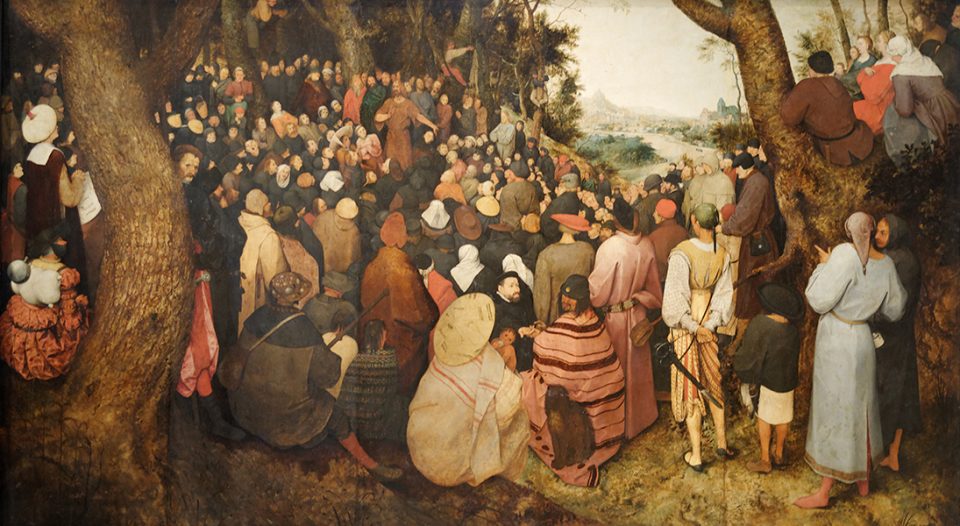 The Preaching of St. John the Baptist by Pieter Bruegel the Elder

I can still hear my father and uncle arguing around the kitchen table on Sunday afternoons, drinking coffee while they tried to figure out exactly when Daddy bought his Case tractor. “Now, I remember that it was while Truman was still president, and ….” “Nah, you’re wrong, ’cause I remember that Gov. Umstead’s funeral was on the radio while I was at the tractor store, and he come in as governor when Ike became president.” “Hello, here! I believe you’re right.” And so it went on any subject—they dated things by events and people, not by the calendar.

This is what Luke is doing in our Gospel reading. He is locating the ministry of John the Baptist in a particular time, a particular place, among a particular people: “In the fifteenth year of the reign of the Emperor Tiberius, when Pontius Pilate was governor of Judea, and Herod was ruler of Galilee, and his brother Philip ruler of Ituraea and Traconitus, and Lysanias ruler of Abilene, during the high priesthood of Anna and Caiaphas …” (1-2).

Too often we try to divorce the stories about an “otherworldly” God from the daily grind of our “this world” reality. We treat these stories and God’s actions in the world like fairy tales—stories that took place “long ago and faraway,” tales that aren’t really factual but are nontheless true because they teach us what we call “spiritual truths” or “philosophical principles.” In this we are more like the Romans and Greeks to whom Luke refers than the Hebrew people among whom the events took place. The stories of the gods weren’t meant to be received as facts, but were told to explain, inspire and entertain.

By contrast, Luke writes his Gospel, his “orderly account of the events … handed on to us by those who from the beginning were eyewitnesses …” (Luke 1:1-2), to show us that this is no ancient fable, no spiritual tall tale. To Luke, his is a historical account of what happened when the word of the God of Israel—the God of Abraham and Sarah; the God of Moses and Miriam; the God of the prophets, including the prophets Isaiah whom he quoted and Malachi whom we read—came upon a man named John who was praying and fasting in the wilderness.

Now, like Daddy and Uncle Andy, we may quibble and argue a bit about the accuracy of Luke’s timeline and his memory of who was doing what when. The historical record is a little fuzzy here, but we can’t argue with the fact that Luke put these details in because he wanted us to believe that this story is factual as well as true. According to Luke, the word of God came to a real man named John in a real place called Judea with a real message about repentance and a very real promise that God was coming soon with forgiveness, justice and peace.

Of course, the important question before us today is: “OK, even if I believe that Luke believed this story to be both true and factual, what does any of this have to do with me as I live my life in my particular time, my particular place, among all my quite particular and peculiar people?”

Right now, we’re in the middle of a lot of really important things, ranging from the personal to the global. Political arguing and posturing from the courthouse, to the statehouse, to the White House; economic upswings and downturns both here and around the world; children and young adults finishing fall semesters in school; the all-important “getting ready for Christmas” with gift-buying and trip-planning and house-decorating and church-attending and cookie-baking and card-mailing, etc.

In the midst our particular time, place and people, it’s more than a little difficult to figure out what that long-ago time, place and people have to do with us. So we turn it into a nice story and seek nice religious sentiment within it, which we lump under the catchall category of “the Spirit of Christmas.” And we use this sentiment to encourage everyone to be nicer to each other, especially family members and the anonymous ones we refer to as “the less fortunate.”

Which is all very good, but also very far from the actual message proclaimed to us in our Scriptures today. They were written to people in the midst of lives that were as full of politics and power, greed and need, desire and disappointment, selfishness and sacrifice, focus on the family and the search for self-fulfillment as ours are 2,000 years later. The Scriptures say that into those worlds of hurt and unhappiness, a word of the Lord came, calling people to repentance. Repentance is the English translation of a Greek word that means something like “turn around and go in a new direction.” The message in Luke, in Isaiah and in Malachi is this: “Listen up. Turn in the direction of God’s voice. Get out of your rut. Stop going around in the same old circles. Stop bouncing back and forth between hope and helplessness because the day is coming when God will act, indeed that day is here.”