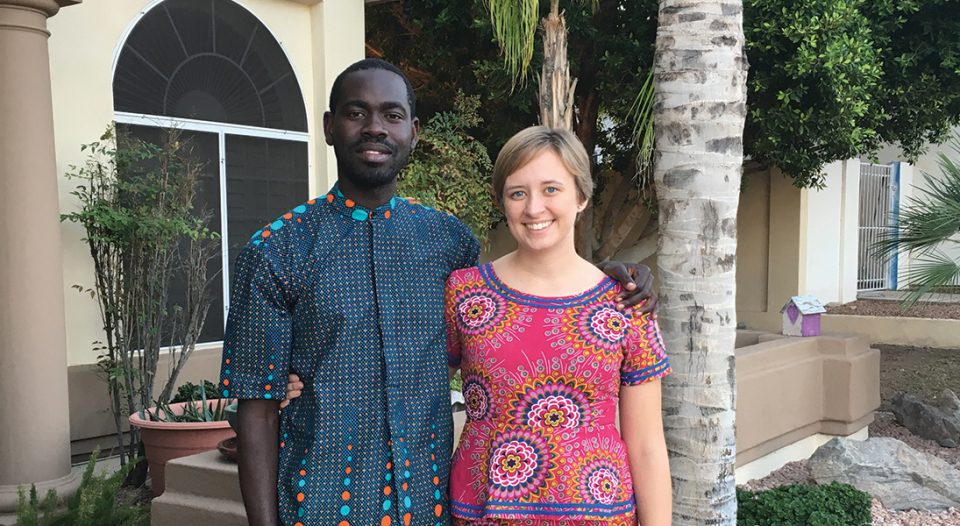 Pascal Sosse Kama, general secretary of the Lutheran Church of Senegal, befriended Julie Gerrish during her year with ELCA Young Adults in Global Mission. Gerrish assisted with the church’s Center for the Promotion of Women.

What it means to live in community differs from culture to culture. For Julie Gerrish, her understanding of community was totally transformed after a year of service in Senegal through the ELCA Young Adults in Global Mission program (YAGM).

Two years ago, Gerrish lived with her host parents, Bousso Sarr and Latyr Diouf, in a small apartment complex near the offices of the Lutheran Church of Senegal. “It was a great experience of being in community,” she said. “Everyone takes care of everyone. I was told, ‘We don’t have a lot of money, but we’re not poor.’ ”

Transitioning to a new culture was challenging, but Gerrish received warm hospitality from her host parents and Pascal Sosse Kama, the church’s general secretary who sometimes joined them for meals. As they shared the traditional community bowl of fish and rice, Kama took Gerrish under his wing. He helped her understand Serer (local) culture by including her in activities such as his sister’s wedding and sharing stories from his life.

“I cherish all that I learned in Senegal and miss my friends there. Before leaving for Senegal, I couldn’t have imagined I would gain a brother like Pascal,” said Gerrish, whose experience has her now planning to study theology.

In October 2017, Gerrish had a chance to extend hospitality to Kama when he visited the Grand Canyon Synod, his church’s companion synod.

For Kama’s visit, Gerrish prepared a room for him, assisted with his meals, spoke Serer and French with him, and drove him to speaking engagements at congregations around Phoenix.

Kama saw Lutherans living their faith and how peaceful life could be in this arid part of the U.S.  “My visit allowed me to discover other ways of life,” he said. “I saw communities where the average age exceeded 50 years. It’s the opposite of Senegal, where our Lutheran communities are mostly young.”

During his visit, Gerrish had to attend a family vigil for her aunt, who was hospitalized. “When asked if he would like to go home instead, [Kama] said, ‘No. We are together; we are family,’ ” she said. “The ties between people and place built through accompaniment are a holy thing.”

Kama has seen firsthand how the YAGM program has strengthened cooperation between the ELCA and its companion churches. “My paternal grandfather always said to me, ‘The best school in the world is travel,’ ” he said. “The YAGM program allows young people to develop and see the world differently. [The program] is so important that it has to be done in both directions: from the United States to Senegal, from Senegal to the United States.”

In January, five young adults from the Senegalese church visited the Grand Canyon Synod as part of a youth exchange Kama coordinated; synod youth will travel to Senegal later this year.

“Hopefully through more exchanges … we can make more holy ties between siblings in Christ, closing the gap and binding us all together in relationship,” Gerrish said.

Wendy Healy
Healy is a freelance writer and member of Trinity Lutheran Church, N.Y. She served as communications director for Lutheran Disaster Response of New York following the 9/11 attacks.

Embodying the call to “serve our neighbor”

A new way of living