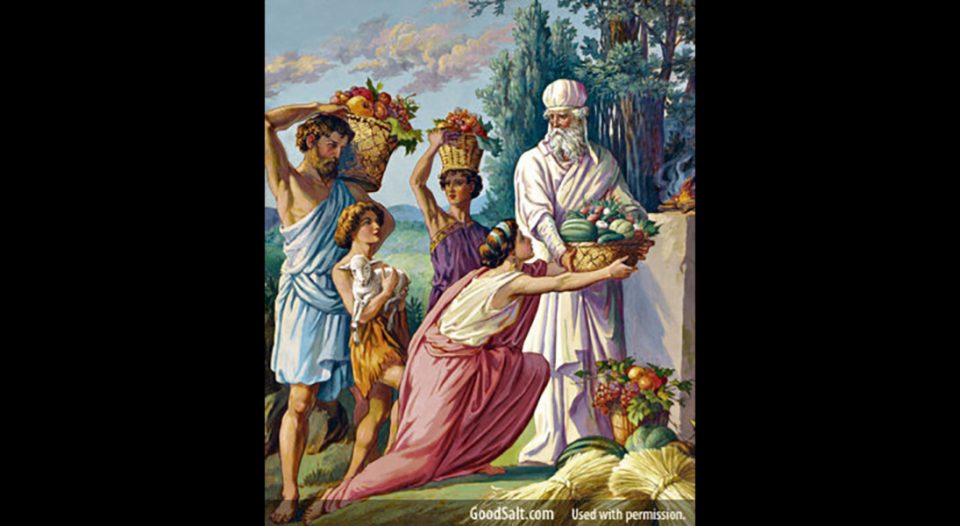 When I’m preparing my notes for these blog entries, the lectionary readings often seem unrelated. What do instructions for an agricultural ceremony in the temple have to do with Jesus’ temptation in the wilderness? But as I thought and prayed on these passages, they seemed to be pointing us in the same direction: toward denial of self and care for others.

When we reflect on the temptation of Jesus in the wilderness as presented in Luke, it’s necessary to see this passage as part of an argument being made about who Jesus is for Theophilus (Luke 1:3) and other Christians who will read this letter. The Gospel begins with testimonies about Jesus being the promised messiah who will upset and realign the fallen universe. Angels testify to Mary, Zechariah and the shepherds. Then humans like Elizabeth, Simeon, Anna, John and those same shepherds testify that Jesus really is the messiah. Later in the Gospel, the heavens split open, and God the Father testifies that Jesus is God’s beloved son. The Spirit, in the form of a dove, comes and rests on Jesus’ head. Angels, all manner of humans (from the lowly to those who officiated in the temple) and even God testify that Jesus is who we believe him to be: the messiah, the Son of God, the holy one who makes all things new and right.

But immediately after all that public acclaim, the same Spirit that landed on Jesus drives him into the wilderness to be alone. There are no crowds, no one to convince—just Jesus by himself preparing for his temptation. The first three chapters of Luke are such a buildup of messianic expectation that the reader might expect the fourth chapter to start with Jesus riding into Jerusalem, readying armies, and then driving the Roman occupiers out of Judea and Galilee. Instead, Jesus waits in the unsettled places by himself, getting hungry, probably sunburnt and possibly a bit impatient as he waits for the tempter to arrive.

When the accuser does come, he begins by challenging Jesus to simply turn stones into bread. This doesn’t seem to be a sinful act. Jesus miraculously provides food and drink for people over the course of his ministry. But the stones and food aren’t the issue—Jesus is being tempted to care for himself and neglect his mission to be a sinless redeemer who is good news to the poor, a mission the whole Gospel has been pointing to thus far. When Jesus refuses to take care of his material needs, Satan shows him that he can avoid his horrible death on a Roman cross. In that moment, Jesus could have purchased from Satan all human life, gaining instant ownership of our souls for the good team! But the problems of sin and death would not have been defeated by Jesus’ death and resurrection. Again, Jesus chooses against his own interests in service to others.

Jesus chooses not to make his way easier but to follow the difficult path of slow, humble obedience to God.

Finally, Satan tempts Jesus to win instant acclaim by a miraculous action in the middle of the temple. All those present would have to believe that Jesus is the messiah. Jesus can avoid the rejection and frustration of the next several years of his life on earth by simply performing a miracle for the religious elite. But again, Jesus chooses not to make his way easier but to follow the difficult path of slow, humble obedience to God. To be real, Satan’s temptations had to be something Jesus genuinely wanted. Jesus, being fully human, didn’t want to suffer, be murdered, or go through life frustrated and rejected any more than we do. But he chose a humble life of obedience to God so that we, who are saved by his grace, can do the same.

This is where I think Deuteronomy comes in. In the ceremony of firstfruits, Israelites are made to repeat a formulaic pronouncement while their basket of agricultural produce is set by the altar. Remembering a time before Israel was a kingdom, they affirm that their ancestor was a wandering Aramean and recount the sojourn as foreigners and the abusive practices encountered while in Egypt. Immediately after reciting that passage, the Israelites are to share the firstfruits that they had brought to the temple with the Levites (who were not allotted tribal land) and foreigners living among them.

Neither God nor even the priests partake of this offering. It is not burnt. The Israelites were to celebrate a meal with the Levites and foreigners and rejoice in the good things God had given them all. This celebratory meal served two functions. First, it redistributed wealth from the Israelites, who had land and the means of agricultural production, to the Levites, who did not, and to the foreigners, whether they had land-wealth or not. Secondly, this festival forced people who may not have known or interacted with each other to share a festival meal. Read past the lectionary verses and you’ll see that, every third year, the tithe for the whole year goes directly to landless Levites, foreigners, widows and orphans. There’s even an oath that the Israelite was to say, affirming that he gave his produce to those on the margins (Deuteronomy 26:13). The ordinances around firstfruits were one of the many ways the Bible commanded wealth redistribution and enforced interactions and sharing time with marginalized people.

Just as Jesus chose to deprive himself of comfort and ease when tempted in the wilderness, we who follow him have the opportunity to love God and our neighbors by standing in solidarity with them through sharing the resources God has blessed us with, including our time. Jesus chose the humble and difficult path of servanthood. Instead of winning over the whole earth with a single act, he chose to speak to individuals, families and communities and show them God’s love. Can we do any less?