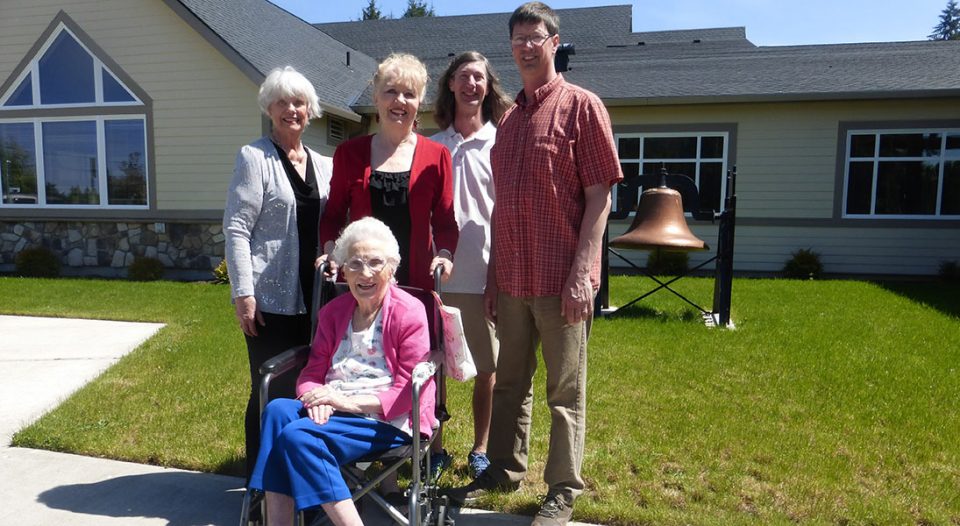 Barbara McCourtney and her mom, Bonnie, are pictured in front of their church with fellow members, Judy (last name withheld, far left) and Judy's two sons. While looking for a new church, Barbara reconnected with Judy, whom she'd met on a train nearly 50 years prior.

When my 92-year-old mother moved in with me, I knew I had to find a different church. I attended a megachurch with clapping and dancing. Mom preferred a smaller, more traditional church. How could I find one for both of us?

I visited several churches, each one pleasant, the people friendly and the pastor likable. But none of them felt right. There was a little Lutheran church around the corner, but I didn’t think I’d like it. I envisioned perfectly coiffed people with puckered brows, singing “Onward, Christian Soldiers.”

When another Sunday rolled around, I decided to buy groceries instead of going church-hunting. As I hopped in my car, I considered visiting the Lutheran church, but I couldn’t! I was wearing a T-shirt that read “Glamma: too glamorous to be a Grandma”—obviously inappropriate for such a proper church.

I decided to take a gander anyway. I quietly opened the door and discovered I was in the reception hall. The smell of coffee and freshly baked cookies wafted on the air.

A lady walked over to greet me. “Hello,” she said.

To my surprise, she was neither coiffed nor puckered.

“Please come in,” she continued.

“Thanks,” I responded. “I thought this was the sanctuary.”

“No,” she replied as she shook my hand and introduced herself. “Would you like me to show you where it is?”

“No thanks,” I said and paused, curious about the sweet smells. “What are you celebrating?”

She smiled, pointing at the refreshments. “We do this every Sunday.”

“Oh, nobody cares,” she said, gesturing toward double doors.

As I meandered down the hallway, piano music—“Because He Lives”—floated on the air, as if to tell me, “You’ve come to the right place.” I tiptoed in and sat down.

When the song ended, they had a moment of silence for confession of sins. This wasn’t done in any of my churches. It felt good. The pastor was young, but his sermon was rich with wisdom.

Later we took communion, and this also was different. We went up one at a time. The pastor and his helper served us individually—much more personal than at other churches, where we helped ourselves as they passed around a plate.

When the service ended, a group of people came over and welcomed me. One lady stood out. “Hi. I’m Judy,” she said, shaking my hand. “You look familiar.”

“What is your name?” she asked.

When I told her, she beamed. “Yes! I’ve been hoping I would see you again.”

I was stumped. I studied her face, trying to recall.

“Were you on a train going from Tacoma to Vancouver?” she asked.

“It was a long time ago,” she continued. “You were planning your wedding, and your dad had just retired from the military.”

I was gobsmacked. “Yes,” I stammered. “How could you remember that?”

“I had two restless little boys,” she said. “You picked them up, took their little hands and said something like, ‘Walking in the garden and … tickle, tickle, tickle.’”

I must have looked a little silly gaping like a little bird waiting for a worm. I managed a nod. “Sounds like me.”

Judy continued: “I had a sore throat and you just took over. I always wanted to see you again because I wanted to let you know how much I appreciated it.”

Then, without hesitation, she turned to her friends and said, “This is Barbara McCourtney. We met nearly five decades ago.”

Next, she introduced me to her son (now a middle-aged man). He too remembered me, though he was only three when we’d met.

I’m rarely at a loss for words, but that day, I just nodded and stammered.

“Won’t you please have coffee with us?” asked one of the other ladies.

How could I resist? We returned to the reception hall, and Judy began introducing me. She pointed to the lady on my left and said, “This is Claudia.”

She pointed to another lady. “This is Bonnie.”

Then she said, “Next to her is Dean.”

OK, OK, Lord! I prayed silently. I’ve got the message. Please stop. This is getting too weird.

Since then, Mom and I have rarely missed a service at that church, Bethel Lutheran in Brush Prairie, Wash. I’d thought it was impossible to find a church we both liked, but I seemed to have forgotten Matthew 19:26: “With God, all things are possible.”

A joy-filled service just for them

My take: How poetry leads us to see creation anew