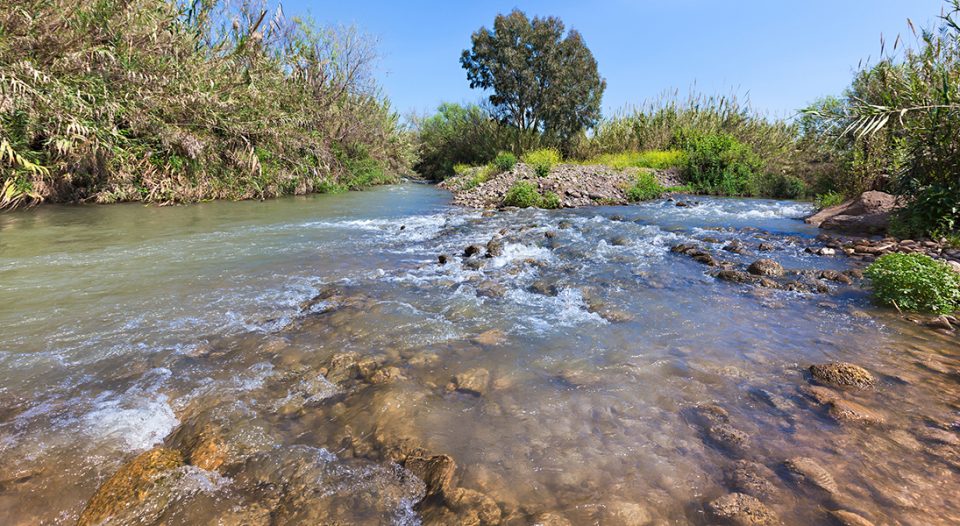 Jordan River at the north of Israel.

Like many ELCA Lutherans this spring and summer, I’ve been watching and participating in synod assemblies. It’s a joy to see so many siblings in Christ gather together to do the work of the church. One of my favorite parts of my Indiana-Kentucky Synod Assembly was hearing Bishop William Gafkjen repeat: “We need to remember that our influence has been greatest when our power has been weakest.”

It’s easy to fret about declining numbers in our denomination, and in self-identifying Christians in the United States overall. But we need to remember that God’s people have always done their best work, not when we are vested with earthly power, but when we have faith like yeast and mustard seeds. While seemingly unimpressive, these things represent the ability to spread quickly and completely change the character of their surroundings. This week’s readings make this clear.

Naaman, the commander of the Aramean forces, was a powerful man by any account. Josephus (Antiquities 8:15.5), among others, held that Naaman was the archer who killed Ahab, the wicked Israeli king (1 Kings 22:34). When Naaman was struck with a debilitating skin disease, an Israeli captive in his house told him he should seek out the prophet Elisha in Israel. Not knowing where the itinerant Elisha could be found, Naaman went to the Israeli palace. The king must have been shaking in his sandals when the man who had slain his predecessor strode into his throne room. No wonder the king tore his robes and worried about how the Arameans were trying to pick a fight with him (2 Kings 5:7)!

Elisha summoned Naaman away from the distressed king to show him there was a prophet (and an active God!) in Israel. But the prophet wouldn’t come out of his house to see the powerful man with all his horses and chariots (2 Kings 5:9). Instead, he merely sent word that Naaman should wash in the Jordan River to be healed. Naaman balked, saying “I thought that for me he would surely come out, and stand and call on the name of the Lord his God, and would wave his hand over the spot, and cure the leprosy” (2 Kings 5:11). And the Jordan, barely a trickle today, probably wasn’t much more impressive in those days. The Abana and Pharpar (probably the Barada and al-Awaj rivers today) are more famous for their ability to sustain irrigation and cooling presence in and around Damascus.

Frankly, Naaman was so unimpressed that he was going to give up and go home. But cooler heads prevailed, and he deigned to bathe in the modest river. He was healed! Even this Aramean general, who fought and killed Israelites, received God’s healing and love. From that day forward, Naaman worshiped the God of the Israelites. Indeed, he is said to only be exceeded in devotion to God, as a former enemy of the Israelites, by Rahab of Jericho (Mekhilta De-Rabbi Ishmael, Masekhta De-Amalek, Yitro 1).

“We need to remember that our influence has been greatest when our power has been weakest.”

Just as the humble Jordan seemed to be an unimpressive vehicle for transforming a mighty general, the ragtag group of disciples that Jesus sent out weren’t very impressive either. Just one chapter earlier in Luke’s Gospel, 12 disciples were sent out with the same mission and instructions that Jesus now gives to the 70 (Luke 9:1-6 and Luke 10:1-12). This foreshadows Jesus’ ministry to both the 12 tribes of Judah and to the rest of the world, symbolized by 70 nations (see Genesis 10 and the table of nations and BT. Shabbat 32b and BT. Sanhedrin 17b). If the scope of this ministry was impressive, the people sent to undertake it were not.

The 70 went out without money, no bags to carry extra things or even [extra] sandals (Luke 10:4). Like Elisha’s disciple Gehazi (2 Kings 4:29), their mission was so critical they didn’t even stop to greet people on the road. They were to eat whatever was put in front of them. If they were refused, mocked, beaten or ill-treated, their only recourse was to publicly clean their own feet to symbolize that they didn’t want to be infected by the lack of hospitality in that town or village (Luke 10:10-12). But whether the 70 disciples were received or not, their message the same: “the kingdom of God has come near to you.”

Under-resourced disciples with a simple message were to go ahead of Jesus into every place he planned to visit and announce the coming messiah (Luke 10:1). In addition to just words, however, they performed acts of healing (Luke 10:9) and exorcisms (Luke 10:17). They were amazed when they came back to Jesus and told him all that they accomplished. But Jesus put even these mighty acts in perspective. Jesus told his disciples that they should rejoice not in spirits submitting to them, but that their names had been written in the book of life (Luke 10:20).

Rather than seeking earthly power, even to use it for good, God often directs unimpressive people to unimpressive work that has universal implications for spreading God’s love around the world.