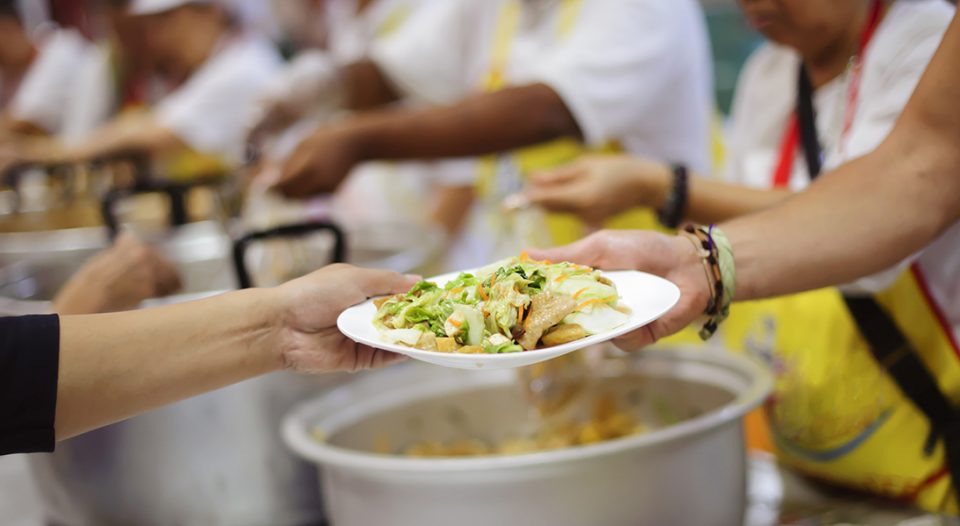 Warm food for the poor and homeless : concept giving with charity

I’m writing this on the evening of July 4. I purposely tucked my son into bed about an hour ago so he would be asleep before the fireworks start. When we lived in Morocco, they launched fireworks for national celebrations about a block away from our home. I love fireworks, so we went outside to watch them. But debris and cinders fell on us and the explosions happened much too close. My son, not even 2 yet, was so terrified that he shook for an hour afterward.

Since then he’s never really liked loud noises, especially fireworks, which is difficult for my family. My mom’s favorite holiday is Independence Day, and I was looking forward to moving back to the U.S. to celebrate it with her. But, like my son, I have difficulty fully embracing national holidays. Please don’t misunderstand, I served my country for two years overseas and am very patriotic. But I see a wide gulf between the United States, the country I love, and the kingdom of God that has my allegiance.

I take some solace that the heroes and heroines of the faith had similar fraught relationships with land, place and country. Hebrews 11 tells us that when Abraham, Sarah, Isaac and Jacob entered the promised land, they dwelt in tents, never truly abiding in permanent structures. Indeed, they confessed that they were strangers and foreigners on the earth (verse 13). They were seeking a homeland, a city with foundations, a place that God had prepared for them. The epistle writer argues that Canaan wasn’t the full manifestation of their hope—they were looking to a heavenly city. They died without fully realizing their hope, but only seeing it from a long way off.

The matriarchs and patriarchs didn’t look back on where they had come from, but set their faces resolutely toward where God was calling them (15). In my view, this is the greatest boast of their faithfulness. When I lived overseas, as I did for most of my adult life, I dreamt about what life must be like in the States. And when I live in the States, I can’t wait to get back to North Africa or Southwest Asia. But Abraham and Sarah, along with their descendants, kept their hearts and eyes focused on the land to which God was calling them and, even more, on their future heavenly home.

It’s this heavenly home that Jesus calls us to prepare for ourselves. Instead of trying to accrue power or influence in this world, we are to use our time here to be servants, ready to serve at each opportunity.

It’s this heavenly home that Jesus calls us to prepare for ourselves. Instead of trying to accrue power or influence in this world, we are to use our time here to be servants, ready to serve at each opportunity (Luke 12:35-36). The best course of action in this world is to sell our possessions and give to the poor. In so doing, Jesus says we store up treasure in heaven where it can’t be lost or taken away (33).

But the goal isn’t to have the grandest treasure trove in heaven. Storing up treasure where the streets are said to be paved with gold doesn’t make much sense. Instead, the goal of a life of service and generosity is an orientation of our hearts toward the full realization of God’s reign and active presence. Where our treasure is, our hearts will also be (34).

Jesus’ theme of serving others—leading to an orientation toward the reign and presence of God—echoes the words spoken through the prophet Isaiah. God was furious that the people celebrated all the religious occasions but didn’t love their neighbors. God desires not just sacrifices, but righteous living and neighbor-love. God really wants people to “learn to do good, seek justice, rescue the oppressed, defend the orphan, [and] plead for the widow” (Isaiah 1:17).

If we come to church to worship on Sunday but then ignore the oppressed and marginalized the rest of the week, our services are also an “abomination” that “[God’s] soul hates” (13). God demands that we live holistic lives of worship. We worship the God of the prophets, who orders us to love our neighbors and participate in ritual worship. One without the other is not enough.

We must live our lives confessing that we are foreigners and strangers in this life. Jesus calls us to orient our hearts toward the place where God’s reign is already and eternally realized. We, like Sarah and Abraham, are to look forward to a heavenly city, and live our lives accordingly. What we do in this life matters to God, and it matters to our neighbor. And it should matter to us.

Look toward the light