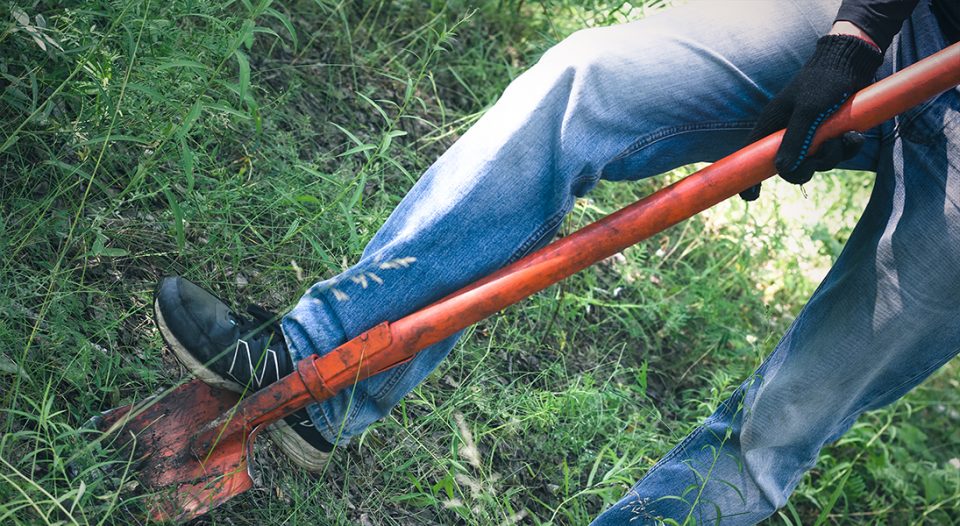 When our kids were young, they spent hours enjoying an ancient swingset—one of those heavy, iron operations that served several previous occupants of our house. When its front right corner started popping out of the ground at the apex of a swing, we mixed a bit of concrete in a bucket and dug a hole around the loose post.

The shovel soon hit something that made a clink. Rocks don’t clink; they thunk. We wondered what we’d struck. The kids sifted through the loose earth with eager fingers and found an old bread bag filled with more than a dozen 50-cent pieces (JFK-keepers) and a few silver dollars.

The coins had been in the ground for a long time. We were thrilled by the discovery, wondering about an unknown child we named Henry who once played in our backyard and secretly buried treasure.

Reluctantly, our children poured concrete into that hole. Treasure grabs one’s attention like little else. We had struck a vein and weren’t ready to seal off the mine shaft.

“The kingdom of heaven is like treasure hidden in a field” (Matthew 13:44). The kingdom of heaven is hidden. A rather odd statement. If Jesus is serious about followers finding his kingdom, you’d think the search would be an easy and obvious task. He might at least take out an ad in the Yellow Pages or provide a map. Why hide something so important?

The whole notion of discovery is critically important in church life. Teachers catechize. Pastors preach. Evangelists share. All three endeavors are vital. But until a church community (including the three groups just mentioned) does the regular work of making theological discoveries for itself, the efforts of the local leadership may not mean much. Theological formation, in all its variety, is more about drawing people toward truth rather than pounding certain facts into them.

The hidden nature of the Christian faith will be embraced and celebrated by wise congregations, providing opportunities for a seeker to scratch well below the surface and look beyond the obvious to eternal truths pointing to the reign of God.

Many Christians have never probed this hiddenness, never truly searched for the “pearl of great value” (Matthew 13:46). With predictable results, some often wind up leaving and conclude that Christianity is meaningless. (Others become bored—another form of leaving.)

Recall the story of the paralyzed man carried around by his four friends (Mark 2:1-12). This quintet somehow manages to climb a ladder and dig through the roof to get to Jesus. We aren’t told if the Lord is pleased with the new skylight or perhaps concerned with the dirt that’s fallen on the coffee table, but the message is clear.

One of the things I used to tell confirmation students: “You’ve reached an age requiring theological digging—faith grunt work—to get at the heart of these old stories. We can talk about the stories together; we can hear various interpretations. But nobody can do the real digging for you.”

A time-tested pastoral assumption worth sharing with any student, young or old: Unless you’re digging down below the surface of Scripture on a regular basis, your faith will very likely become stagnant.

Upon discovery of kingdom life in this old parable about hidden treasure, there’s a clean break from an old perspective: “In his joy he goes and sells all that he has and buys that field” (Matthew 13:44).

Notice something about this purchase: it’s made in joy. Life with Christ, grounded in search and discovery, brings joy. (That’s different, of course, than a life filled with ease. Faith with a cross at the center can never make such a promise.)

The most joy-filled people I know are those who have discovered their unique gifts, offering them to others in Christ’s name. Such giving is not a burden nor an obligation. It’s discovering what life is for, and such discovery begins with an honest search for the hidden.

What Lutherans mean when we talk about daily bread