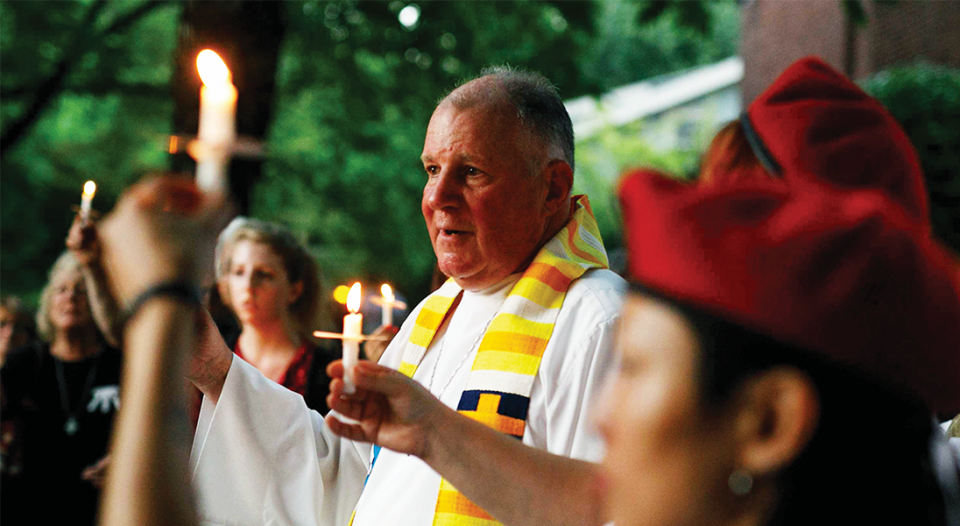 A Portland congregation is spearheading an all-inclusive, grassroots legislative effort to make Oregon residents safer from firearms and to inspire a national movement to quell gun violence.

Augustana Lutheran Church has teamed up with Oregonians across the faith spectrum to form Lift Every Voice Oregon, a political action committee (PAC) seeking to halt the spread of assault weapons, require the registration of such weapons already in circulation and outlaw high-capacity magazines.

“This is all a continuation of our sanctuary work,” said Knutson, whose congregation was at the center of a national news story in 2014 when it provided sanctuary to Francisco Aguirre of El Salvador.

Lift Every Voice Oregon takes its name from the song “Lift Every Voice and Sing” and traces its roots to an interfaith service at Augustana following the June 2016 shooting at the Pulse nightclub in Orlando, Fla., which left 49 people dead and 53 others wounded.

The group set itself up as a PAC in March 2018 after the school shooting in Parkland, Fla., that killed 17 and wounded 17 more. Most of its leadership has been working against gun violence for years, Knutson said, adding that the group is following many of the same organizing principles used in the sanctuary movement and police reform efforts.

“Parkland students spoke out so powerfully, saying thoughts and prayers were not enough,” Knutson said. “Our youth in Oregon are highly invested in this. At Augustana, they offered their newly renovated second youth room to serve as the Lift Every Voice Oregon statewide office.”

Knutson said organizers for Lift Every Voice Oregon invited the state’s leading rabbis, imams, pastors, and other faith and community leaders to be part of the steering committee.

As a faith-based campaign, he noted, the effort is based not on politics but on “an ethic of love from all of our great faith traditions, and the sacred nature of every life and our responsibility of one generation to another to weave the beloved community.”

Citizen organizations in Oregon can place proposed legislation on the statewide ballot by a process known as an initiative petition. Lift Every Voice Oregon drafted a proposal for the 2018 general election, but the Oregon Supreme Court and the state’s attorney general couldn’t agree on a 15-word ballot title for the petition amid intense pushback, Knutson said.

“The secretary of state’s office said we faced more opposition than any proposed ballot initiative in Oregon history,” he added. “But we continued our work and submitted two bills to the Oregon Legislature for the recently concluded 2019 session, House Bill 3223 and House Bill 3265, which had several co-sponsors in the House and Senate and would have accomplished our goals regarding assault weapons registration and magazine capacity. However, we could not get a hearing.”

Now Lift Every Voice Oregon is setting its sights on the 2020 general election, with a statewide network of volunteers that includes signature gatherers, many of them students trained by the group.

“This will be the first ballot initiative in 20 years in Oregon that did not use paid signature gatherers,” Knutson said. “We want our junior high and high school students to not only lead but to have hands-on experience in civic engagement that will last a lifetime.”

Longtime Augustana members Janey and Joe Paterno are among those in the congregation who have worked to get gun control issues before Oregon voters. In 2018 they “trained the trainers,” who then instructed signature collectors on how to meet the requirements of Oregon’s election officials.

The couple said the workforce’s inclusive nature is critical. “People of all denominations and nondenominations, people of faith and people who have no church, believers and nonbelievers—this affects each and every one of us,” Joe Paterno said.

Cahana said the spirit of cooperation shows “that anyone can put aside labels that divide us and unite on issues of moral responsibility.”

Knutson agreed: “Interfaith partnerships out of small areas can help change the nation. We see this as a bellwether, and if enough states take action, then Congress will maybe take action. This is not just about Oregon; it’s about changing the gun culture we live in.”

Perspective: On prayers for Las Vegas—and for the U.S.

What it means to care