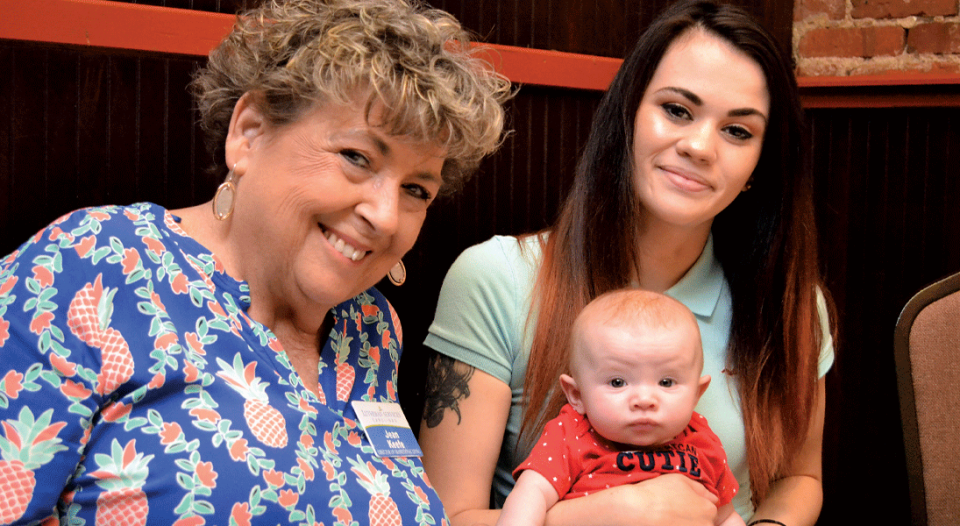 Savannah (last name withheld) and her two brothers entered foster care as young children. When they were adopted by a prominent South Carolina couple, they expected a stable and loving family. Instead, they suffered horrific abuse and were ultimately removed from the household.

She then bounced around the system, living in 11 foster homes and eight group homes. At 17, Savannah was adopted by a foster mom she liked, giving her hope for the future. Then, in an almost unimaginable turn of events, her new mother died of cancer.

Savannah then found herself in an unhealthy relationship and supporting her baby, Vera, alone by working nights at a restaurant. Caring for her daughter motivated her to stop using drugs, but life was hard. She was perpetually exhausted, struggling to make ends meet.

While buying diapers with her last $10, Savannah got a phone call she won’t forget. Her caller was Jean Keefe, director of Lutheran Services Carolinas’ Transitional Living for Young Adults program.

Yet, Savannah was skeptical about the support Keefe offered. “I didn’t think anybody would want to help someone like me,” she said.

So she ignored Keefe’s offer of support. But Keefe, a longtime case manager who understands the challenges of life after foster care, checked in with Savannah by phone for weeks. Finally, Savannah felt comfortable enough to talk seriously with her.

With Keefe’s help, Savannah secured safe, affordable housing. She built a reliable support network and secured her driver’s license. She found a way to continue working and caring for Vera. Then she began discussing long-term goals with Keefe.

Foster children can choose to remain in care until they turn 21, but many opt to leave at 18 because they’re angry at the system and eager for independence, Keefe said. Most are unprepared to live on their own, she added.

Tyler (last name withheld) chose to exit the system at 18 after placements in five foster homes and three group homes. “It was pretty bad,” he said of his experience. “It was a hard ride.”

That hard ride ended, but a different one began. Tyler wound up homeless. Trying to make it on his own, he ran afoul of the law. “I was in and out of jail, still chasing whatever I was chasing, trying to make fast money,” he said.

Tyler’s experience isn’t unusual. According to one study of young adults who left foster care at age 18, 36% had experienced homelessness at least once by age 26; 80% of the men had been arrested and 80% of the women had been pregnant. Only 58% had finished high school by age 19; just half were employed by age 24.

While buying diapers with her last $10, Savannah got a phone call she won’t forget.

All too familiar with these realities, Keefe was thrilled when Lutheran Services Carolinas asked her to develop a program for young people like Savannah and Tyler, those aged 18 to 25 who are transitioning out of foster care and into adulthood. She and another case manager, Sewell Gelberd, now facilitate housing, employment, education and medical care for qualifying young adults in South Carolina.

Begun in fall 2018, the program took a while to get off the ground. “I knew I had to earn their trust and be someone they could rely on,” Keefe said. “It really takes just one person in their lives who cares to make a difference.”

Savannah said a lot of foster kids feel lost. “So many kids that are capable of so many things, I feel like they’re forgotten about,” she said. “Programs like [this one] really help find those kids who feel they’ve been forgotten about and get them back on their feet.”

Keefe learned early on to meet her clients where they were. She posted a video about the transitional living program on YouTube. She scoured social media for young people who were struggling. As her early clients learned what the program could do for them—and how devoted she was to their well-being—they told their friends. Through word of mouth, the program grew quickly.

Tyler said Keefe found him through Facebook after he posted about losing his job. He already knew “Ms. Jean,” as her clients call her, from receiving Christmas bags as a foster child from St. Luke Lutheran Church in Florence, S.C.

Keefe helped Tyler find a place to live and get things he needed for his infant son, Braxton. Tyler said he’s determined to be a better parent than his were. “Ms. Jean, she’s really been a mother figure, actually,” he said. “I never had a mom or a dad. She’s really been someone to call on when I’m not even looking for anything, when I just need to talk, and she’s there.”

Both Savannah and Tyler have multiple ways of connecting with Keefe—via text, phone calls, video chats or Facebook Messenger.

“She really shows that she cares,” Tyler said. “She makes me feel like I’m important. When you go through stuff the way we [did], you’re scared to ask for anything. We asked our parents to not do what they did, but that didn’t help, so why ask anybody else? I’m not afraid to call her at any time and say, ‘Hey, I need some help.’ And she’s always there; no matter what, she’s always there.”

“We asked our parents to not do what they did, but that didn’t help, so why ask anybody else?”

Keefe benefits from her work as well. “This job has been such a blessing to me, seeing how much we can support this fragile population and help them get a new start,” she said.

The transitional living program was established with funds from LSC’s “Love One Another” capital campaign in South Carolina. It also has received support from area ELCA congregations, individual donors and community organizations.

Partners in the community are integral to the program. Homeless shelters, transitional living centers, the departments of social services and juvenile justice, local libraries, and school districts help identify participants for the program, which has served 27 young adults and expects to care for up to 36 in 2020.

The results are undeniable. “Things have gotten so much better,” Savannah said. “My eyes have been opened to so many opportunities. I believe in myself now.”

Welcome to the Welcome House!