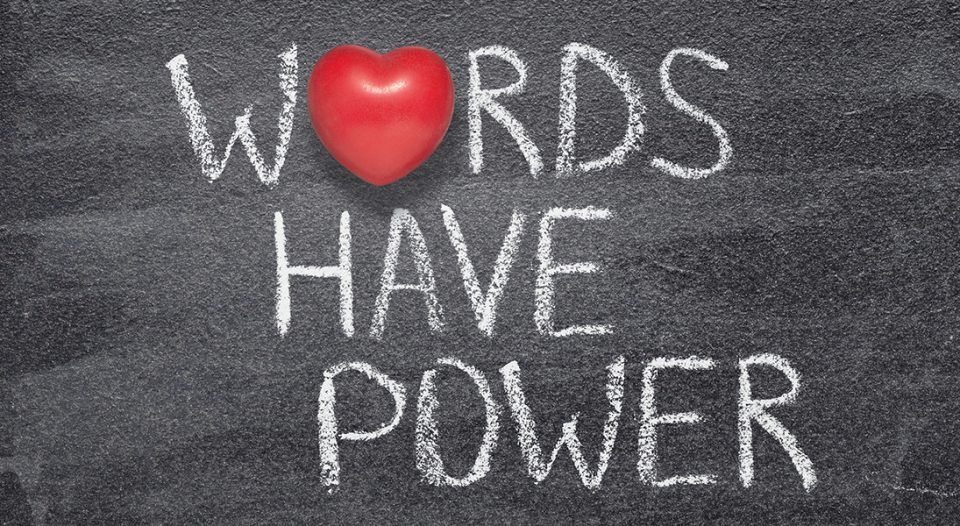 As I sit in my home office obeying the shelter-in-place order and trying to focus on work while my kids loudly sing downstairs, I can’t help but think about the power of speech. Singing along with Daniel Tiger, my children are able to get inside of my head, making it hard to concentrate. And last night, my eldest son told a joke that was so perfect, with such impeccable timing, that my wife and I found it difficult to breathe because we were laughing so hard. My son observed that his words “made Mommy and Daddy cry in a good way.” Words have power. This week’s lectionary gives several examples of the power of human and divine speech.

In John 14, Jesus challenges his disciples to see that Jesus and the Father are supernaturally present in each other. Jesus wants them to know that if the disciples have seen him, they have seen the Father. To support his claim, he links his words to God’s work: “Do you not believe that I am in the Father and the Father is in me? The words that I say to you I do not speak on my own; but the Father who dwells in me does his works” (John 14:10). When Jesus speaks, God’s work is accomplished.

This is true in multiple ways. Yes, of course, our favorite miracle from John involves Jesus making mud to give sight to a man born blind. But most of his other miracles in the Gospel of John, and certainly in the other Gospels, are speech acts. Jesus pronounces a healing, and it’s accomplished.

In addition to all his miraculous signs, I wonder if his speech is also mirroring God’s creative work at the beginning of the cosmos. When Jesus describes the world to come—when people will live with God, when the kingdom of heaven will be established on earth in justice, righteousness and peace—I think he is beginning to speak a new creation into being. When Jesus speaks about abundant life as the way, the truth and the life (John 14:6), he calls abundant life into creation in the disciples just as God spoke the world into being in the first place. When Jesus speaks, God accomplishes God’s works, just as God always has—by speaking creation.

The good news is that Jesus enables and wants us to be able to speak with the same power, to testify to God’s love, faithfulness, mercy and grace in our lives and our situations.

But what about the rest of us? Our words have power as well. In 1 Peter 2:1, which this week’s lectionary skips, we are reminded that our words have power to injure others and defame God if we use our speech foolishly. On the other hand, when we testify to what God, Jesus and the Spirit have done, our words have the power of God.

When Stephen was being stoned after his long review of God’s work throughout Israelite history, he testified that he saw the heavens opened and Jesus at the right hand of God. His accusers did a strange thing as they rushed to kill him: they covered their ears. Why? Something about Stephen’s words was dangerous to them, and they knew that they must block out what he was saying. I imagine that the utter conviction of Stephen’s testimony of seeing the risen Jesus was dangerous to those who would use their power to permanently silence those witnesses. I’m reminded of a few lines from one of my favorite poems, “Refusing Heaven”:

The old women in black at early Mass in winter
are a problem for him. He could tell by their eyes
they have seen Christ. They make the kernel
of his being and the clarity around it
seem meager, as though he needs girders
to hold up his unusable soul.
(Collected Poems by Jack Gilbert; Alfred A Knopf, 2012)

As Stephen received injury after injury, as men so full of certainty and disgust that killing a human by throwing stones at him seemed like righteousness to them, he somehow was able to shout, “Lord, do not hold this sin against them.” I wonder at the power of a man who was about to die from multiple blunt force traumas shouting grace for his killers. The text says Saul/Paul approved of the murder (Acts 8:1), but I wonder if the power of Stephen’s shout for mercy and grace didn’t come back to his mind for the rest of his life and ministry.

In Jesus we see the fullness of God and God’s power displayed. Jesus himself identifies the words that he speaks with God’s powerful works. The good news is that Jesus enables and wants us to be able to speak with the same power, to testify to God’s love, faithfulness, mercy and grace in our lives and our situations. So, especially as we live our lives in the strange reality of the coronavirus, let our speech reflect the gracious love of God and the expanding of God’s reign in the world.