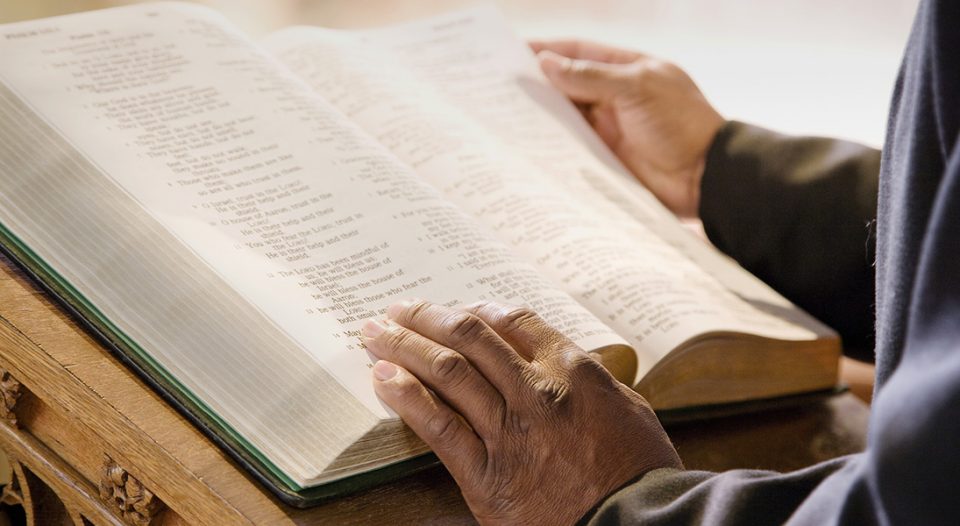 Let’s be honest: listening to the many and varied voices that speak as Christian leaders, we hear a lot of different things. And that’s a beautiful and necessary thing. If we learn anything from Scripture, it’s that context matters. Jesus didn’t say the same things to the ruling elites that he said to the poor and downcast. Paul’s messages to the Philippians and the Corinthians were different. Reading through the letters to the seven churches in Revelation, one gets a sense of an intimate knowledge about what different messages were needed for different contexts. So when we hear Christian leaders focusing on different issues in different times and places it’s not only OK, but deeply biblical. And yet ….

Sometimes we hear leaders downright contradicting each other, calling each other liars or accusing one another of misrepresenting God. This, unfortunately, also has biblical precedent. During the first year of Zedekiah’s reign (about 597), there was a quarrel between the prophets Hananiah and Jeremiah. See if any of this sounds familiar. There had been a massive catastrophe where a large part of the population was lost to sudden death while others were separated from their families. The people who spoke for God had differing responses to the calamity. Hananiah reassured the people that all would be better and life would go back to normal. They would see their families and friends again just like they used to. He even gave a timetable for the return to normalcy—less than two years (Jeremiah 28:3, 11).

Jeremiah, on the other hand, had been warning about this calamity for almost 30 years. Like any human, he preferred good news to bad and said he wished that Hananiah’s prophesy would come true (Jeremiah 28:6). But he reminded Hananiah and all those listening that a prophet’s job was to prophesy war, famine and pestilence as judgments against the countries that intentionally defied God and abused the powerless (Jeremiah 28:8). Jeremiah, himself, early in his career, exclaimed:

Thus says the Lord of hosts, the God of Israel: Amend your ways and your doings, and let me dwell with you in this place. … For if you truly amend your ways and your doings, if you truly act justly one with another, if you do not oppress the alien, the orphan, and the widow, or shed innocent blood in this place, and if you do not go after other gods to your own hurt, then I will dwell with you in this place, in the land that I gave of old to your ancestors forever and ever (Jeremiah 7:3-7).

Harming people and looking to other sources of power instead of God have real consequences. Jeremiah goes on to say that those who prophesy prosperity and a certain timeline for return to peace and normalcy are only to be believed after what they prophesy has come to pass (Jeremiah 28:9). In other words, if someone proclaims judgment when God’s people fail to live up to God’s desires for caring for foreigners, widows, children and the poor, take her seriously. If someone proclaims unlimited prosperity and peace, no matter what systemic evils persist, do not take him seriously.

Jesus proclaims that whoever welcomes a prophet will receive a prophet’s reward (Matthew 10:41).

In the short Gospel reading for this week, Jesus advises us to welcome true prophets. Jesus proclaims that whoever welcomes a prophet will receive a prophet’s reward (Matthew 10:41). Welcoming a prophet, I argue, is taking that person seriously about the importance of changing behavior that hurts people and disappoints God. The 20th-century prophet of prophets, Rabbi A.J. Heschel, pointed out that true prophets see the world differently than most of us do:

Indeed, the sort of crimes and even the amount of delinquency that fill the prophets of Israel with dismay do not go beyond that which we regard as normal, as typical ingredients of social dynamics. To us a single act of injustice—cheating in business, exploitation of the poor—is slight; to the prophets, a disaster. To us injustice is injurious to the welfare of the people; to the prophets it is a deathblow to existence: to us, an episode; to them, a catastrophe, a threat to the world. Their breathless impatience with injustice may strike us as hysteria. We ourselves witness continually acts of injustice, manifestations of hypocrisy, falsehood, outrage, misery, but we rarely grow indignant or overly excited. To the prophets even a minor injustice assumes cosmic proportions (The Prophets, Harper and Row, year).

We can’t afford to pretend we live in a world of peace when we don’t. The welcoming of such a prophetic vision is very much in line with the words of Paul from Romans. He sees humanity in slavery, working toward the active production of evil. Instead of being slaves of systemic sin (Paul speaks of “sin” as a singular noun here and elsewhere, not as individual “sins”) that harms others and disappoints God, we are to be slaves of righteousness (Romans 6:17-18). Paul sees humanity as either serving sin or serving God’s righteousness. In the words of that other 20th-century prophet Bob Dylan, “you gotta serve somebody.”

To welcome a prophet means to take her seriously, as conveying the importance that God places on the moment, and on humans loving God and/through loving our neighbors. Jeremiah the prophet warns that messages of peace, normalcy and lack of repercussions for abuse are to be believed only when they come true. On the other hand, God’s displeasure with abuse and enjoyment of righteous service toward neighbors is a consistent message throughout Scripture. Let us win a prophet’s reward by taking seriously the messages of the prophets these days who help us remember God’s love for the downtrodden and insistence that we love and serve “the least of these” (Matthew 25:40).