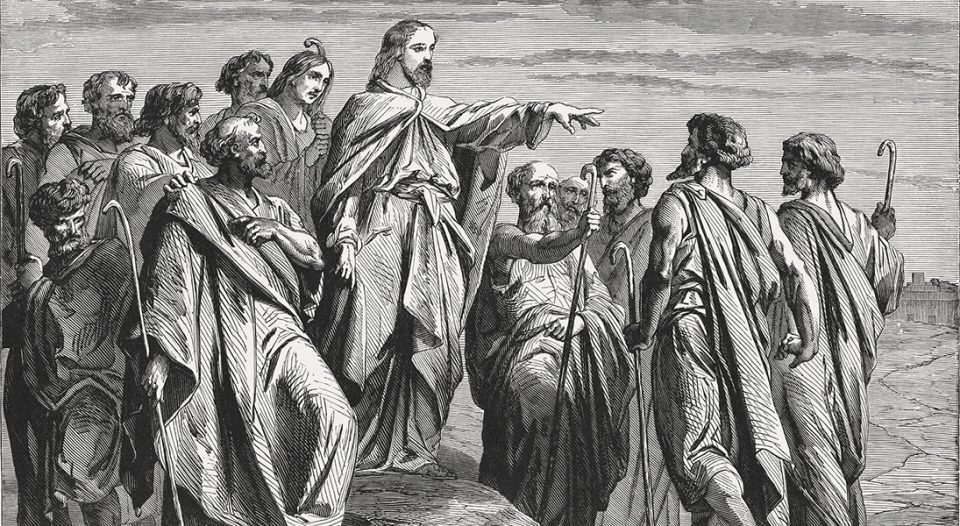 Sometimes, amid particularly busy periods of work, I tend to lose focus on just why I’m doing all this stuff. Writing lectionary reflections, making ministry videos and teaching classes can all become their own ends, rather than the means toward an end: sharing the good news of God’s reign and rule. Everything I do should be toward proclaiming the good news that God’s reign of grace, love and self-sacrifice for others is at hand. We are invited to proclaim and live that truth!

After the Israelites had been released from slavery and oppression in Egypt by God’s salvific miracles, they journeyed in the Sinai across the time of three new moons before coming to the mountain of the Lord (Exodus 19:1). Freedom from slavery without relationship was never the goal. God had redeemed the Israelites in order to start the work of a priestly kingdom and a holy nation (Exodus 19:6). God reminded the Israelites that they had been saved from the cruelty of slavery and carried on eagles’ wings to Godself (Exodus 19:4) to be a treasured possession that lived according to God’s design (Exodus 19:5).

But even amid all the particular focus on the people of Israel, the text is clear that God’s work was not going to be limited by, or to, one national group. God reemphasizes that Israel is but one nation and that the whole earth (and all the people in it) belong to the Lord (Exodus 19:5). The psalmist will later instruct all the earth to make a joyful noise to the Lord for this reason (Psalm 100:1). God didn’t limit this proclamation to Moses or the leaders but made sure that all the people heard God’s voice and instructions (Exodus 19:9).

We must never forget, either, that gathered around the foot of the mountain were a mixed multitude of people from all lands who recognized God’s power and justice when they saw it (Exodus 12:38). They had left Egypt to face an uncertain future with the God of the Israelites. The story of God’s good news about forming a holy kingdom has always been focused on particular times, places and people, but also desirous of including all people.

Jesus delegated some of his authority to his disciples and sent them out so they could speak in multiple villages and cities at once. They would, like him, preach the good news of the kingdom, heal the sick and cure ailments.

Hundreds of years later, Jesus himself was focused on visiting every city and village (Matthew 9:35) to make sure that all people had a chance to hear him preach the good news of the kingdom. When Jesus perceived that the people of Galilee were harassed and helpless, like sheep without a shepherd, his heart went out to them (Matthew 9:36). Just as surely, God’s heart went out to the Israelites when they cried out while they were harassed and helpless in their Egyptian slavery. Just as God was moved to do a new thing and free the Israelites from slavery, I think Jesus changes strategies here because he was moved by the people’s plight.

But there were just too many people to reach by proclaiming God’s kingdom in one village or city at a time. Jesus delegated some of his authority to his disciples and sent them out so they could speak in multiple villages and cities at once. They would, like him, preach the good news of the kingdom, heal the sick and cure ailments (compare Matthew 9:35 with Matthew 10:7). However, Jesus preserved his teaching ministry as his alone, for the time being. It’s true that Jesus did limit the scope of the disciples’ ministry to prioritize the lost sheep of the House of Israel (Matthew 10:5-6). But we need to read those verses in conversation with the Great Commission that we studied last week. The same disciples that Jesus told not to go among the gentiles or Samaritans, he would later send to make disciples out of all nations.

The good news of the kingdom is that God is the ruler of the whole universe. This God has compassion for the harassed, abused and downtrodden and will do whatever it takes to free them/us from that which binds and enslaves, whether it is systemic injustice or just plain, old human sin. While the breaking out of God’s kingdom might be focused on certain times and places, God is never limited to any time or place. Indeed, all the earth has good reason to make a joyful noise to the Lord.