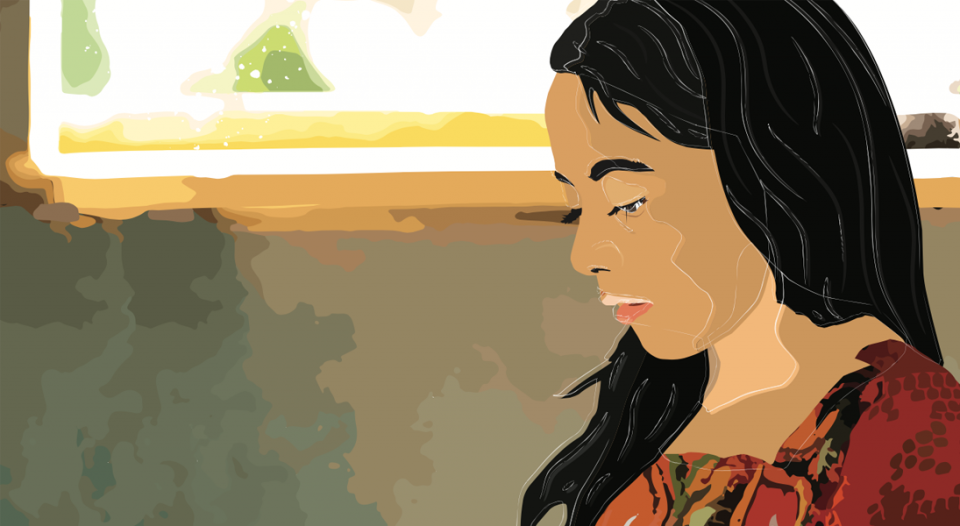 A child worships at St. Augustine Lutheran Church, Esmeralda, Guatemala, in this illustration made from a photo. Mission Support gifts supported training for the congregation’s pastoral leadership.

But the St. Augustine community believed this audacious space—high on a rock overlooking La Esmeralda—was exactly where God had called them to be. Cardenas said they were inspired by other churches and holy places they had seen that were built on hilltops. “It is better to build on a rock than in the sand, so that is why we built here,” he added, referencing the Gospel of Matthew.

Though St. Augustine’s building is new, the congregation has worshiped in La Esmeralda for more than 20 years since their return from Mexico, where they spent the worst years of Guatemala’s civil war in refugee camps. Today the congregation strives to support sustainable livelihoods, health care and education for its community, said Stephen Deal, ELCA regional representative for Central America.

The ELCA has invested in the ministry of St. Augustine by accompanying leaders within the Augustinian Lutheran Church of Guatemala (ILAG in Spanish). Cardenas and other ILAG pastors receive theological and evangelism training at retreats funded by Mission Support (the offerings congregations share with synods and the churchwide organization). For him, the opportunity to connect and grow together has been a great gift.

The St. Augustine community believed this audacious space—high on a rock overlooking La Esmeralda—was exactly where God had called them to be.

“[Hope] has been the thing that has supported us the most,” Cardenas said. “And that is what I have been able to share with my fellow pastors, especially in the retreats.”

In his own ministry journey, a serious health condition nearly left Cardenas blind and delayed his pastoral training by over eight years.

Despite challenges to his health and the community, Cardenas has kept his vision fixed on God. For all who visit or pass by St. Augustine, he hopes that “when you look at the church, you remember that God is with you always, and you can do anything with God at your side.”

This story first appeared in “Stories of Faith in Action 2019-20.” To find a video story about this ministry, visit elca.org/sofia.

David Mills
David Mills is a writer and nonprofit professional based in Chicago.

I was a stranger

Welcoming those in need