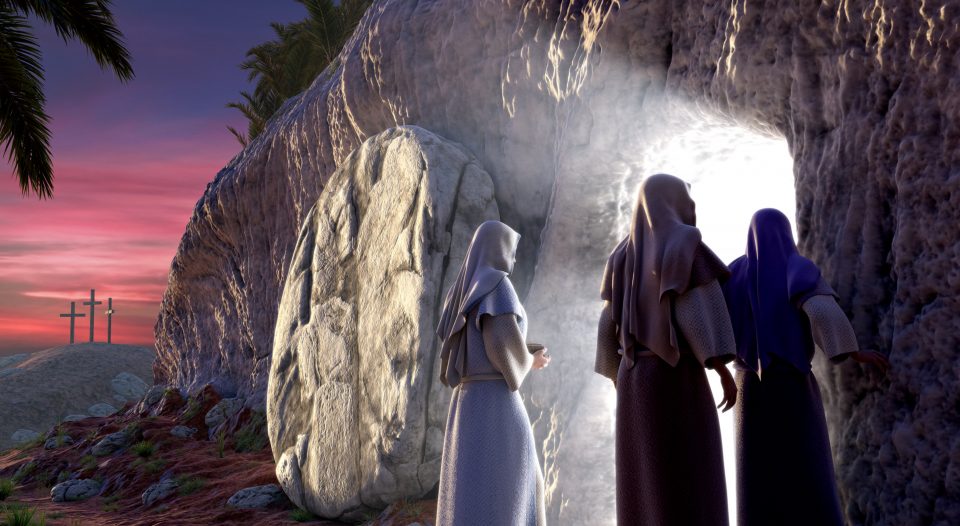 The last word in the earliest manuscripts of the Gospel of Mark is a conjunction. Those manuscripts don’t have 16:9-20, so the last word is from verse 8—γάρ. It’s frequently translated as “for,” “and,” “because,” “even” or “indeed.” My favorite translation is from a friend who said Mark ends with the conjunctive phrase “and then .…” In any case, Mark’s hurried Gospel is always telling the reader “and then …” and “immediately next …” and leaves us wondering what happens next.

We know what happened before this week’s reading. Mary Magdalene; Mary, the mother of James and Joses; and Salome, the mother of John and James, came to anoint Jesus’ body after Joseph of Arimathea hastily stashed him in a tomb. They must have been reeling with hundreds of questions. For far too many of us, especially this year, death frequently comes as a surprise that the extended family isn’t equipped to deal with. Where do we bury him? What kind of funeral would she have wanted? What do we do with their stuff?

Some of these questions had been answered for the women at the tomb. Joseph, whom we haven’t heard about previously in the Gospels, probably paid the Romans to receive Jesus’ body. He was kind enough to bury Jesus in his own tomb, but it’s easy to imagine that Jesus’ closest followers and family weren’t consulted. The state-sanctioned murder had happened quickly, without a chance for his followers to make preparations. And the Romans had commandeered Jesus’ few possessions at the time of his death. Without a choice of what to do with his things, or even where to bury him, these faithful women showed up to at least give him a loving reburial.

One of the women who bankrolled Jesus and two of the mothers of his young disciples showed up to do their last, best act of caring for the man in whom they had placed so much hope and loved so thoroughly. As they were recognizing yet another problem (the stone would be too much for them to roll away on their own to gain access to his body), they were shocked to see that his tomb was open and a man was just sitting inside. He told them that Jesus of Nazareth had risen and that they should go and tell Peter and the disciples (making the women the first apostles). The women said nothing to anyone else, as they apparently hurried to tell the male disciples who were all in hiding.

But then what? What happened next? Did the disciples see Jesus immediately? Did Jesus conquer the Empire of Rome that had killed him? Were all the prophesies immediately fulfilled? No. Jesus gradually appeared to larger and larger groups until he ascended into heaven. Rome stayed in power and destroyed the temple and then Jerusalem only a few decades later. So many of the prophesies remain only partially fulfilled.

This week’s passage from Isaiah points to God’s triumph over sin and death:

On this mountain the Lord Almighty will prepare
a feast of rich food for all peoples,
a banquet of aged wine—
the best of meats and the finest of wines.
On this mountain he will destroy
the shroud that enfolds all peoples,
the sheet that covers all nations;
he will swallow up death forever.
The Sovereign Lord will wipe away the tears
from all faces; he will remove
his people’s disgrace from all the earth.
The Lord has spoken.

In that day they will say, “Surely this is our God;
we trusted in him, and he saved us.
This is the Lord, we trusted in him;
let us rejoice and be glad in his salvation” (Isaiah 25:6-9).

We celebrate because death has been swallowed up forever, the sheet that obscures the eyes of the nations from seeing God’s salvation has been destroyed. But the rest of the chapter talks about how God will destroy the cities of the proud and terrible invaders (2, 3, 5, 10-12) and will be a shelter for the poor and a refuge for the distressed, shielding them from the ruthless (4).

Even as the Gospels were being recorded, the Roman stranglehold on the Holy Land was tightening until Jewish revolts were put down with overwhelming force in 70 C.E. and 136 C.E. Thousands of people— men, women and children—were massacred by the proud and terrible invaders. Josephus relates that the Romans lined the walls of Jerusalem with thousands of crosses in 70 C.E. in order to crucify the 500 Jews captured daily (Jewish Wars, Chapter 11). The Christian community, which was hardly distinct from the Jewish community in the Holy Land, must have seen hundreds, if not thousands, of their siblings in Christ murdered in the same way as Jesus.

In the face of this terror, they recorded that even though they were scared, Mary, Mary and Salome went to share the good news that Jesus had risen from the dead. At a time when so many of their neighbors were being executed, the early Christians dared to hope, dream and believe that the empire didn’t have the final word, and that God was redeeming humanity from sin and death. Even in the darkest of times, when our friends and siblings are dying, when politics and rulers are unsettling and frightening, when prophecies are not being fulfilled (yet), our central claim remains that Jesus rose from the dead.

Would the Prince of Peace triumph over the power of the empire? Isaiah 25 argues that it will certainly happen! The Gospel of Mark doesn’t say. What we know from Mark is that Jesus was raised from the dead. The powers of sin, death and the empire couldn’t hold him. He wanted his disciples to know that he was going ahead of them. And then .…

The great hope of Jesus’ resurrection isn’t the end of the story, but the beginning of triumph of the kingdom of heaven over the forces of sin and death. We are blessed to be called into Jesus’ victory and continue the story of what happens next.