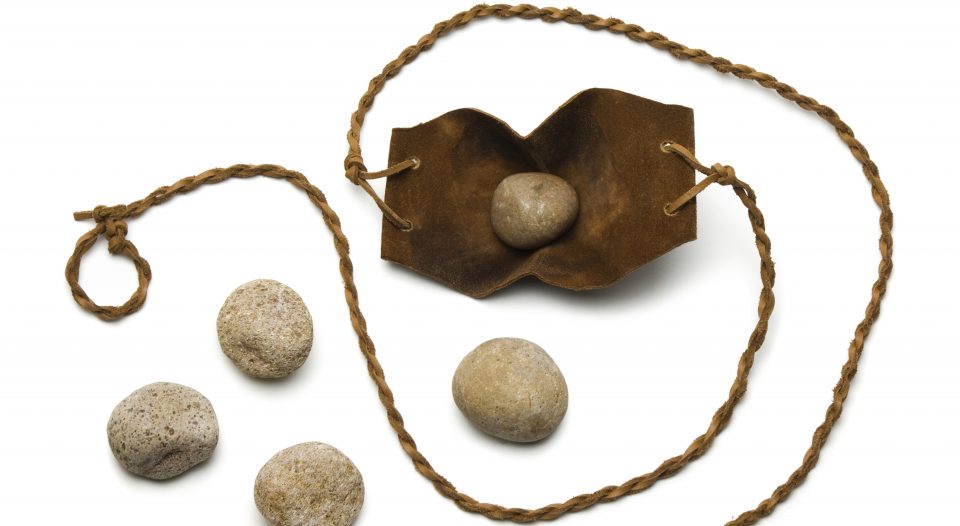 This week’s passages tell of two occasions when other-than-human evil attempted to assault and insult God’s people. One instance was in a military confrontation, and another was in an attack involving the weather. I want to say from the outset that I believe strongly that God has nothing to do with almost all violent conflict and equally almost nothing to do with so-called “acts of God,” such as floods and storms. But once in a very great while, Scripture argues that God is involved in such acts as a means to overcome evil with good.

The first story of David and Goliath is direct in describing the conflict between those who would injure the chosen people and defame God on the one side, and God and God’s people on the other. For 40 days, Goliath from Gath came out to taunt the Israelites and request single representative combat rather than an all-out war. When David came to deliver foodstuffs to his three older brothers in Saul’s army, he understood what was truly at stake: God’s honor.

“You (Goliath) come against me (David) with sword and spear and javelin, but I come against you in the name of the Lord Almighty, the God of the armies of Israel, whom you have defied. This day the Lord will deliver you into my hands, and I’ll strike you down and cut off your head … and the whole world will know that there is a God in Israel. All those gathered here will know that it is not by sword or spear that the Lord saves; for the battle is the Lord’s, and he will give all of you into our hands” (1 Samuel 17:45-47: NIV).

David rejected not only Goliath’s insults against God and God’s community, but also his idea of representative combat. David wanted to fight all the Philistines, and we will see why and how.

Two quick historic notes. First, modern Palestinians aren’t Philistines, not genetically and not in terms of community coherence across history. Romans renamed the province of Judea as Syria Palaestina (reviving a term earlier used imprecisely by Herodotus) and merged it with Roman Syria in 135 CE after Hadrian put down the Bar Kockba Revolt. This renaming of the Roman state of Judea was meant to insult the Jews who remained in the area. The remaining Jews were prohibited on pain of death from living in Jerusalem, which was renamed as Aelia Capitalonia. The mix of Jews, Greeks, Arabs, Turks, Syrians, Egyptians, Europeans and their offspring in the area thousands of years later are toay’s Palestinians. So we shouldn’t think that the Philistines whom David faced are the same as Palestinians today. David did not fight Palestinians.

Second, the Philistines that David faced were a seafaring, invading group from islands in the Mediterranean who settled in coastal cities. The Israelite experience of sojourning in Canaanite territory during the period of the patriarchs, according to the narrative of Scripture, gives them a much earlier connection to the land than the recently arrived Philistines who, nevertheless, were able to establish a strong presence in the coastal areas because of their superior metallurgy and horse husbandry (1 Samuel 13:19-22).

David’s battle with Goliath was against an other-than-human being who was from a long line of spiritual enemies of God and those who aligned themselves with the enemy of God. David was victorious.

It’s in the context of a narrative of a race between the Philistines and Israelites for hegemony over the promised land that David answers Goliath’s challenge to God’s people. David’s preparations point to an understanding that he saw this battle as primarily spiritual. He prepared not to just face a giant—instead, he was facing down a long-standing challenge to God’s plan for the world, not just the chosen community.

It’s important that we see David’s conflict as primarily a battle against evil forces rather than as primarily an ethnic conflict. David had no problem later living with the Philistines, even in Gath (1 Samuel 27:1-4). He took up arms against those who insulted God. His battle with Goliath was against an other-than-human being who was from a long line of spiritual enemies of God (Numbers 13:33; Joshua 11:21-22; 2 Samuel 21:15-22) and those who aligned themselves with the enemy of God. David was victorious.

In this week’s Gospel, Jesus’ response to the storm that threatened to sink him and the disciples is to be seen in the same light. Jesus rebuked (ἐπετίμησεν) the storm and told the waters to be silent (πεφίμωσο) (Mark 4:39). He took the same actions with an evil spirit earlier in Mark (1:25). This wasn’t one of the natural storms that regularly sweep into the hills surrounding the Sea of Galilee, but a spiritual attack on the person and peace of Jesus.

In A Rabbinic Commentary on the New Testament: The Gospels of Matthew, Mark, and Luke (KTAV Publishing; 1987), Professor Samuel Lachs argued that this is a clear indication that Jesus wasn’t contending with the weather but with a שר של ימ (a “prince of the sea”). Remember, that the sea was the principle element prior to God’s creation, and biblical poetry goes to great length to show God’s victory over the sea, especially the Sea of Reeds/Red Sea through which the Israelites were redeemed to God. In the story of Noah, it’s the sea that God allows to undo creation and then promises to constrain ever after. Jesus, who was tired and overwhelmed by crowds and just wanted a little rest and solitude, didn’t merely calm the weather. He rebuked and silenced a demonic attempt on his life and those of his followers by the sea.

Jesus and David both defended themselves and God’s honor from a spiritual being that attacked them. Not all trials that we face are spiritual (Luke 13:4). Sometimes bad stuff just happens. But sometimes the forces of evil are aligned against us. We know we are right to fight back, however, precisely when it’s God’s honor and the beloved community that is under attack, not just us. We should be careful and not imagine that just because we feel under siege there is a spiritual attack. But when someone attacks God’s honor by threatening God’s beloved, especially the poor, widows, orphans and foreigners who God cares about particularly, we should investigate and be prepared to cast out in Jesus’ name the evil that is being done.