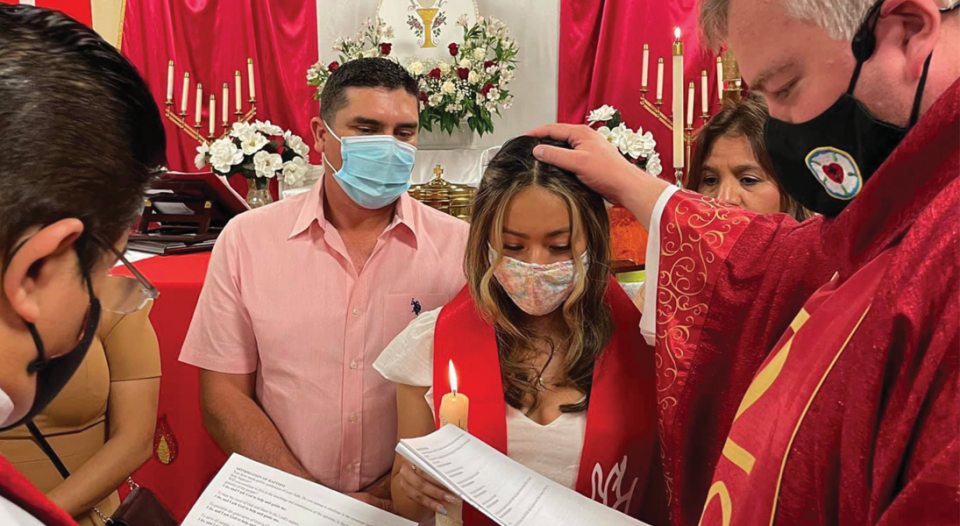 In year two of the COVID-19 pandemic, San Gabriel has resumed in-person worship with use of masks.

Jesus Escamilla knows the power of prayer. For the past 15-plus years, the pastor has seen God answer prayers repeatedly for his congregation, San Gabriel Lutheran in Alvarado, Texas.

“What God wants, if you believe and trust in how he wants to do it, it will get done,” he said.

Escamilla came to Alvarado in 2006 before San Gabriel officially formed. At that time, future congregants drove more than 30 miles to San Miguel Lutheran Church in Fort Worth to worship and held Bible studies weekly in people’s homes. “[My] first visit was in a house because we didn’t have a church here,” Escamilla said. “And we went to a different house the next week, going house to house for Bible study.”

In 2007, Escamilla became San Gabriel’s official worship leader, still ministering in homes for both study and Sunday services. But Escamilla and his congregants knew they needed a building for their growing community.

That same year, a man in town approached Escamilla with an offer. If they paid the landowner the $15,000 that he had already put toward the mortgage on 5.6 acres of land, he would sign the deed over to the congregation and they would assume payments on the mortgage.

It seemed a good solution, so the congregation gave the landowner a $2,000 down payment with a promise to pay the remaining funds.

San Gabriel began holding outdoor services on the land. But as winter approached, worshipers needed a building. A member and professional builder then stepped up and constructed a rough shelter in a week. The congregation began meeting in their new building, which had a dirt floor. “Everyone was dusty, but they didn’t care, because they had a place to worship—their own place,” Escamilla remembered.

It soon became clear that the building needed a floor, but the congregation didn’t have the money to build it. “I told everyone to continue to pray,” Escamilla said. “I told them that if this is what God wants, it will happen.” The answer to those prayers came in the form of a gift of $5,000 from Calvary Lutheran Church in Richland Hills, Texas.

Soon after, St. John Lutheran Church in nearby Grand Prairie, which was closing, donated its pews and paraments to San Gabriel. But St. John had an even bigger gift in store.

Although San Gabriel had made payments toward the land, the landowner said he needed the remaining funds or he wouldn’t sign over the deed. The congregation had yet to gather enough funding, so Escamilla did the only thing he could—pray.

Escamilla also invited members of St. John to worship so they could see their donations given new life in San Gabriel’s sanctuary. At the end of worship, members of St. John’s council surprised them with a check to pay off the debt and take full ownership of the land.

“That was my answer, and I said, ‘Thank you, Lord, for letting me know what you want,’” Escamilla said. “It was touching to let them know St. John was living on in a way at San Gabriel.”

In the years since, San Gabriel has grown and added a fellowship hall that’s become a community hub for a largely Mexican immigrant population. For members such as Angela Alarcon, who began attending San Gabriel as a child, the congregational community provides comfort and belonging for those who often feel like outsiders because they’re immigrants.

“It ties back to our culture in Mexico,” she said. “If we get homesick, we have the community to rely on—we have that as a steady backbone.”

But like so many congregations, San Gabriel struggled to maintain its sense of community during the first year of the pandemic. It pivoted to worship on Zoom and Facebook with Escamilla, lay leaders and a few choir members in person at the church.

In this new worship setting, collecting offerings became a challenge. While some members sent in their offerings, many were unable to contribute financially. So the church began hosting weekly food sales to raise needed funds. “With the Latino community, tithing is going to be difficult, especially with the immigrant generation,” he said. “With our food sale every week, a family hosts, and that’s their way of giving back.”

Escamilla believes that San Gabriel has been built up by the generosity of others—church members, nearby congregations and, through Mission Support funds, the Northern Texas-Northern Louisiana Synod. “It’s been a conjunction of churches working together to help a community that was struggling,” he said. “We have this wonderful community that is working together to work with what the Lord wants us to do.”

For Alarcon, who is studying to be a lay leader in the church, the relationships she’s built through San Gabriel have made a lasting impact. “They were the ones who brought us into the Lutheran faith,” she said. “The community gave me so much to be able to succeed, and I just have to repay that and show other young people the same thing.”

A version of this article appeared in the 2021-22 issue of Stories of Faith in Action, which highlights stories of Mission Support at work.