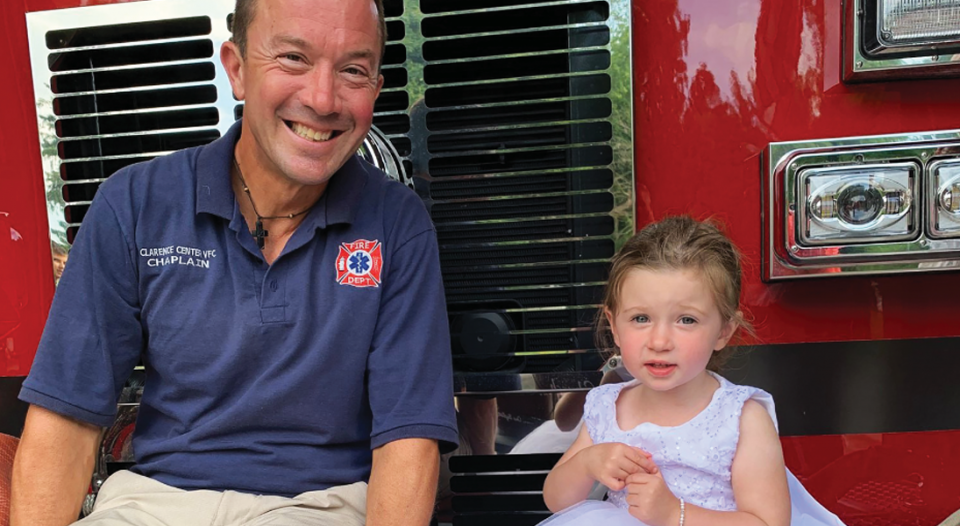 Steve Biegner, pastor of St. Paul Lutheran Church in Eggertsville, N.Y., and its Fire Church ministry, sits with Bree Mutter on the day of her baptism at Fire Church.

Vishal Ryan Gangaram has been an atheist and, later, a practicing Muslim, but over the Labor Day weekend the 23-year-old was baptized at St. Paul Lutheran Church in Eggertsville, N.Y.

Since being baptized, Gangaram believes his “inner voice or conscience has become stronger. I also feel that God … shows me signs, in many ways and on many occasions, to keep me moving forward, and for that I am grateful.”

Gangaram was one of 38 people the congregation baptized between February 2020 and Labor Day 2021, a span that encompasses the height of the COVID-19 pandemic. Biegner said the number of baptisms at St. Paul during that time was nearly four times that of an average year. The newly baptized included infants, children, teens and adults.

Fourteen of the baptisms took place at St. Paul’s, and 24 were done through Fire Church, a new mission for local first responders that the congregation launched the month before the pandemic was declared.

The baptisms and Fire Church are the result of the congregation putting energy into evangelizing in the community, meeting people where they are. As Biegner explained, “If we’ve learned one thing at St. Paul’s, it is that we have to listen harder to the first word of the Great Commission: ‘go.’ The church has been ready to do the baptizing, teaching … but we rarely go. Too often we wait for others to come to us.”

“If we’ve learned one thing at St. Paul’s, it is that we have to listen harder to the first word of the Great Commission: ‘go.’”

To baptize the families of Fire Church, St. Paul went to “their comfort zone, their sanctuary, which is their firehouse,” he said. “[That] is a place they already find community, vulnerability, family—a place they share their gifts and where they give and receive grace. We’ve stopped asking our first responders to come to church and feel uncomfortable, and now we go to their firehouse, barracks and hangar.

“One of [the baptized] was a past fire chief who was just there to help out and watch. He was so moved by the experience that he asked halfway through the baptisms if there was any chance that he could be baptized as well. I tried to get out of God’s way and said, ‘Heck, yes!’ We baptized him with the firehouse chaplain pouring the water.”

To accommodate baptisms at the church during the pandemic, St. Paul held services outside when possible or scheduled them inside its clean, well-ventilated sanctuary. Most of the baptisms included family members and sponsors attending via Zoom or FaceTime. To minimize physical contact, Biegner often asked parents to do the pouring of water and laying on of hands.

“We all found this incredibly intimate and beautiful,” he said of the last change. “We’re keeping the tradition.”