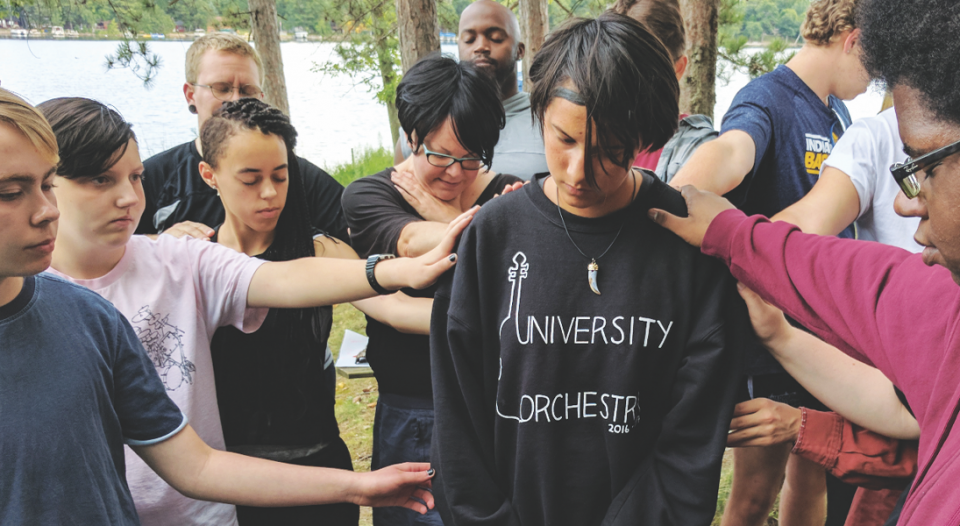 Courtesy of the Naming Project

The Naming Project ministry organized its first summer camp for LGBTQIA+ youth and allies in 2004. It has held a virtual camp the last two years.

Often dealing with rejection and isolation before the pandemic, many LGBTQIA+ youth have had an even tougher time during COVID-19. In response, Lutheran rostered ministers and others have set up virtual safe spaces for those young people to learn about and embrace the intersections of their sexuality, spirituality and gender identity.

Within the ELCA, those efforts are part of a larger and necessary journey to make the church more welcoming to the LGBTQIA+ community, said Ross Murray of the Naming Project and Drew Stever of the new, entirely virtual Queeranteen Camp.

“We have to make sure we have more and more spaces where young people feel safe to be themselves and talk about themselves and their lives and have adults in their life to support them,” said Murray, an ELCA deacon and senior director of education and training at the GLAAD Media Institute. “In addition to the pressures of the pandemic, LGBTQIA+ youth, especially transgender youth, are experiencing an onslaught of legislation in multiple states that tries to cut them off from their peers and supportive adults.”

Murray, whose call is to bridge LGBTQIA+ and faith communities, co-founded the Naming Project in 2003. The ministry organized its first summer camp for LGBTQIA+ youth and allies in August 2004. Prior to COVID-19, the camp was held at Bay Lake Camp in Deerwood, Minn., owned by First Lutheran Church in St. Paul. Virtual for the last two years, it now features as many camp activities as possible that could be replicated online, including games, songs, crafts and discussion.

The Naming Project is open to youth of all sexual orientations and gender identities who want to explore and share faith, experience community and advocate for systemic change in church and society.

“The Naming Project was the first time that I felt that I could be both a part of the LGBT community and Christian,” said Dallas resident Jordyn Schmidt, a 20-year-old transgender woman studying to be a medical assistant.

“The Naming Project was the first time that I felt that I could be both a part of the LGBT community and Christian.”

Miya Ochocki had a similar experience of finally feeling whole. “Spirituality and sexuality often feel exclusionary of each other,” said the 21-year-old Minneapolis native, who works in special education and attends college part time. “The Naming Project summer camp was the first safe space where I comfortably and openly wielded my sexuality and spirituality in tandem.

“Any space that allows for both factors is much needed and shows members of the LGBTQ+ community that they do not have to give up any part of themselves.”

To help deliver that message, the ELCA a year ago announced a new initiative: Total Inclusion! Widening the Welcome at ELCA Outdoor Ministries. A collaboration between the ELCA and Lutheran Outdoor Ministries, the initiative aims to help outdoor ministry groups learn how to welcome those who identify as LGBTQIA+ and others historically marginalized by the church.

A community of resiliency

Stever, who came out as transgender in 2016 during his second month of seminary, grew up Lutheran, “never seeing myself represented in church leadership but knowing that if God loved me there had to be a place for queer folks in the church.”

“As an intern, I spent a lot of time researching the history of the church and its relationship with the LGBTQIA+ community and not finding great stuff but finding ways that folks in the queer community had been resilient,” Stever said.

A similar resilience led Stever and his partner—who has three children, two of whom identify as queer—to begin the brainstorming that led to Queeranteen Camp.

Stever remembers “never seeing myself represented in church leadership but knowing that if God loved me there had to be a place for queer folks in the church.”

“The kids had been looking forward to the Western States Youth Gathering in 2020, but then it got canceled,” he said. “So we thought maybe we could create a camp that’s virtual. We announced it on Facebook, thinking it would be small, with our kids and their friends. But within days it had been shared hundreds of times, and hundreds of people signed up from around the world.”

The six-week virtual interfaith camp kicked off in June 2020 and featured both small- and large-group gatherings and the forging of friendships that spanned the globe.

A year later, with the pandemic showing signs of winding down, Stever shifted his efforts away from hosting a second version of Queeranteen Camp in favor of highlighting other inclusive spaces and simply “seeing what the need is and if we can provide it.”

Part of the greater need, both he and Murray said, is continued healing and reconciliation between the ELCA and LGBTQIA+ worshipers, including young ones who have felt somewhat left out of the discussion.

Historically, discussion about LGBTQIA+ people within the church has centered on ordination and relationship recognition, rather than youth, Murray said, adding, “The goal is the transformation of society and having our young people be healthy and productive adults who continue to have a relationship with the church.”

Camp reaches out in love