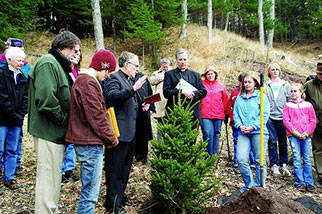 Amid a breathtaking backdrop of national forests, lakes and streams, ELCA Lutherans and people of nine other faith groups in Michigan’s Upper Peninsula collaborate for one mutual cause: to care for God’s creation.

On Earth Day 2009, in partnership with the Earth Keeper Tree project, hundreds of Lutherans planted 12,000 white spruce and red pine seedlings in 15 counties.

Their participation in this work is shaped, in part, by a social statement of the ELCA, Caring for Creation: Vision, Hope and Justice. Its words are a call to deepened responsibility: “When we act interdependently and in solidarity with creation, we do justice. We serve and keep the Earth, trusting its bounty can be sufficient and sustainable.”

Since 2004, the Earth Keeper Initiative has conducted annual Earth Day “clean sweeps” of hazardous and electronic waste, energy conservation programs and other environmental hands-on projects through more than 150 churches and temples. Volunteers have collected almost 370 tons of waste, including pesticides, oil-based paint, pharmaceuticals, computers and televisions.

The interfaith initiative provides an opportunity to meet on common ground, says Jon Magnuson, co-founder of Earth Keeper, ELCA campus pastor at Northern Michigan University and executive director of the Cedar Tree Institute. “We connect, meet and work along other faith traditions. It’s an interesting way that God works.”

A coalition of ELCA parishes in the Upper Peninsula and Lutheran Campus Ministry help support the initiative.

“Even though we don’t have creedal connections, we do have connections to the Earth,” says Thomas A. Skrenes, bishop of the ELCA Northern Great Lakes Synod. “It’s a model for what can happen around the country when we focus on what we have in common.”