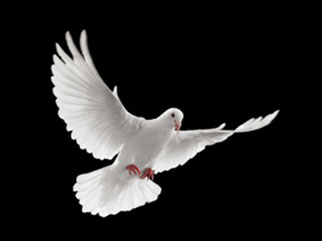 Jesus tells you to love your enemies and pray for those who persecute you, not so that you can be good, but so you can be free!

I’ll end with a story about how you just never know when God might make your enemy your friend.

Chris Rosebrough hosts a conservative Christian radio talk show titled “Pirate Christian Radio.” He once spent two of his shows talking about me and how I am disobeying God by being a female pastor, I’m a heretic because I have gay folks in my church, etc., etc. You get the idea.

A few months later he showed up at a conference I was speaking at in Minneapolis-St. Paul.

You should know that I’m a fighter and my first response to situations is not always my actual final response, but initially, I’m upset. Usually God quickly moves me to deal with the situation graciously, but initially I’m wired as a fighter.

So when I heard he was there I went into a mini rage: “He shouldn’t be here! Don’t show me who he is, I’m not talking to him!”

Clearly he was my enemy.

But the next day a middle-aged guy with a beer gut and a bad goatee walked up to me after I had spoken, extended his hand and said, “Hi. I’m Chris…” I swallowed hard, extended my hand, said a quick “help me” prayer and we proceeded to have a conversation about our need for God’s grace, forgiveness of sins and the Eucharist.

A conversation in which he cried twice. At the end I said, “Chris, I have two things to say to you. One, you are a beautiful child of God and two, I think you and I were desperate enough to hear the gospel today that we might even be able to hear it from each other.”

Now Chris calls me every couple of months and we talk for an hour. He hasn’t written about me or talked about me on his radio show and he’s gotten into a lot of trouble from his followers for calling me his friend.

Did this happen because I managed to make my heart feel really nice, warm, fuzzy feelings toward him?

I can’t stand the guy.

This was a loving-my-enemy that only could flow from the heart of a forgiving God.

The same God who in the book of Ezekiel says, “I your God will give you a new heart and put a new spirit within you; I will remove your heart of stone and give you a heart of flesh” (11:19).

And that is what freedom feels like. May it be so. Amen