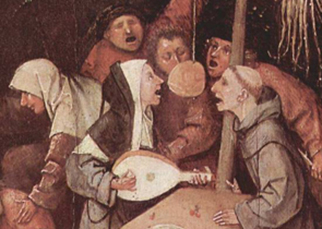 I must admit, on April Fool’s Day, that I think I understand this foolishness a little too well.

I’m easily made the fool.

It’s not just on April Fool’s Day. It’s every day. And it isn’t as if I don’t try to steel myself against falling for the jokes that others set before me. Really, I try not to fall headlong into believing people when they tell me things I know deep down aren’t really true.

I try to resist following down paths people say point to things I know aren’t actually there.

We are fools. This is most certainly true.

I think I fall (and fall hard) on April Fool’s Day (and, let’s face it, on every other day as well) because I hold out hope that the joke played on me might not actually be a joke.

I lean into the promise set before me because I trust a little too much that the promise might be true. I open myself up to the prank because I’d love nothing more than for the actions of others toward me to be genuine.

Hoping, trusting, loving that which is not God, I am a foolish sinner to the core.

Of course, I am not the only one who is foolish.

God, too, is foolish.

In his writing to the contentious and consternating Corinthians, Paul writes: “For the message about the cross is foolishness to those who are perishing, but to us who are being saved it is the power of God… For God’s foolishness is wiser than human wisdom, and God’s weakness is stronger than human strength” (1 Corinthians 1:18, 25, emphasis mine).

When Jesus Christ rides into Jerusalem on that first Palm Sunday, the people shout “Hosanna!” Most people read this as a shout of praise. In actuality, though, the word means something like, “Save us, Lord!”

The people who cried this perhaps had a particular picture of how Jesus was going to do this. A powerful ruler would come in and overturn the political structures, set right the economic imbalances, clear away the lines that divided people from one another. This is how they heard the promise of a new king, a savior.

Yet how Jesus goes about this is pure foolishness to those who are expecting redemption and even more laughable to those who were the powerful.

For someone to die on a cross is not a sign of wisdom and certainly not a showing of power. Dying on a cross was about humiliation and utter powerlessness, at least according to the human wisdom of the day, especially when the one dying on the cross is supposed to be powerful.

When the one dying on the cross has been called God’s Son — because gods don’t die, and they don’t die on the cross — all hope seems lost.

Yet God’s wisdom, Paul writes, is not ours. God’s strength is our weakness. God’s foolishness is our power.

Through his death and resurrection for us, Jesus Christ is God’s foolish power on the loose among us.

And we are never the same again. We are made new.

We are turned upside down for the sake of Christ, who dies and is raised from death for us.

We are given new identities. Marked with the cross of this foolish Christ and sealed by the Holy Spirit in the waters of baptism, we are made fools for Christ.

Foolishly, we live upside down lives, at least according to conventional wisdom.

Forgiven by a God who looks headlong into our sin and destroys its power through these words: “You are forgiven, for Jesus’ sake,” we do not hold grudges. We forgive those who wrong us. And, foolishly enough, we even confess our sins to those we have wronged.

Reconciled with God through Christ’s death and resurrection, we do the arduous work of reconciling with those from whom we have been estranged.

Instead of putting boundaries around whom and where God’s grace takes hold, we look for God’s wisdom and power in foolish places: among those who have been marginalized, oppressed and silenced. Where all hell has broken loose, there and then we see God most present and at work.

If all of this sounds foolish to you, you’re right.

Paul Lutter is a visiting instructor at Gustavus Adolphus College. He is working toward his Ph.D. from Luther Seminary.