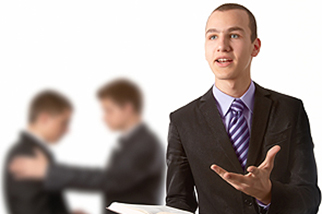 One of my favorite cartoons from The New Yorker magazine has a guy with his arm draped over the pastor’s shoulder outside the church after worship. The church sign reads: “Easter Sunday Service — 11:00 a.m.” The cartoon caption reads, “You’re in a rut, Rev. Every time I come here you’re preachin’ about the resurrection.”

It’s an old joke, but I know the guy in the cartoon. He’s been a member of every congregation I have served. They are the folks who put in an appearance on the Christian high holidays and then complain to their friends about how boring church is.

Most of the time we clergy types just shake our heads and mumble, “What are you gonna do?”

Well, one year on the Tuesday after Easter I decided I needed to do something. So, I called Fred.

“Pastor who?” he asked, seemingly baffled that any pastor would call him in the middle of the week. “Oh, pastor!” The mental tumblers finally falling into place. “;Say again, what did you want to talk to me about?”

“Church,” I said. “I want your opinion about church. Can I buy you coffee?”

There was a moment of hesitation, like he was recalling a time past when the principal asked him to come to the office for a “little chat.”

“Fine,” I said, a little surprised that he accepted so easily. “Sounds good to me.”

It was good, actually. Not fun, but good.

Fred, you see, was in a rut. His dead-end job was making him crazy, but with an underwater mortgage, two kids in college and a dog with gout, he felt frustrated and trapped. Going to church on Christmas and Easter was mostly a nod to cultural conformity.

Seeking but not finding

I thanked Fred for his candor. I hated to admit it, but he was right. Preaching about the resurrection is akin to pontificating endlessly about your spouse’s many virtues when all he or she really wants is a heartfelt kiss.

Somehow, the so-called Evangelicals seem to get the enthusiasm part right. There is energy among them. You’ll never see worshipers at Willow Creek or Saddleback Church mumbling the Apostle’s Creed while looking at their watches and counting down the minutes.

So, what can we, boring ole Lutherans, do differently and still keep what is precious about our heritage?

To begin, let’s own who we are. As Donald McCoid said in the April 2011 edition of The Lutheran, “It’s important to affirm our Lutheran claim that we are evangelical. It’s even in our name: Evangelical Lutheran Church in America.”

He’s right. We are evangelical Christians, a description associated with people who get all excited by Jesus. In fact, we could get bumper stickers: “Lutherans: The OTHER Evangelicals!”

No one needs to hear another sermon “about” the resurrection of Jesus. What we all yearn for is a life-giving, perhaps life-changing, encounter “with” the resurrection, with the living Christ.

Here’s the good news: We can find that in Christ-centered relationships with one another. St. Paul said it first to the Christians in Corinth, “You (all) are the body of Christ and individually members of it” (1 Corinthians 12:27). As such, “If one member suffers, all suffer together with it; if one member is honored, all rejoice together with it” (v. 26).

What if Fred had walked into an assembly of Lutherans so resurrected from liturgical apathy that the place sparked with electric excitement?

What if he had been greeted in the parking lot, not with “Oh, Fred, see you finally made back to church,” but with “Fred! I have missed you, my friend. It is so good to see you! Our assembly is not complete without you.”

We can do this. We don’t need a rock band and multi-media extravaganza. But we do need the Spirit of Christ alive and at work among us.

We do need a sense of a living encounter with the resurrection.

We can do this on Christmas and Easter and every Sunday because we are the Evangelical Lutheran Church in America.

Dennis Smith is the pastor at Messiah Evangelical Lutheran Church, an ELCA congregation in Constantine, Mich.