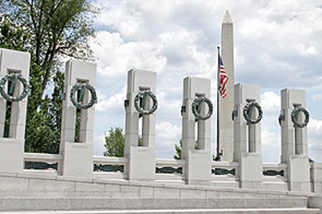 Ebb Culp remembers that while serving on the U.S.S. English, a destroyer that saw action in the Pacific in the last year of World War II, “we fired many bullets at the Japanese.”

Ebb, a member of Lutheran Church of Our Saviour, an ELCA congregation in Greenville, S.C., is now among those “firing” generous amounts of dollars at Japan to help survivors of the disastrous earthquake and tsunami that struck Japan and the Pacific Rim March 11, 2011.

Ebb says of his military service, “I wasn’t drafted, I was dragged.”

It was clear to him who the enemy was. His ship, which saw action in the Philippines, and at Iwo Jima and Okinawa, was strafed and attacked numerous times. The English was part of a task force that bombarded the coast of Japan and was the first U.S. surface vessel to enter Tokyo Bay.

Mark Cerniglia, pastor of Lutheran Church of Our Saviour, praises Ebb’s service to his country and to his congregation.

Ebb’s long-time friend Shelton Rimer, a veteran of the fighting in Europe during World War II, is also a member of the same congregation.

“Both men went through the mindset when the Japanese were seen as the enemy and a lot of negative things were said,” Mark says.

When the earthquake and tsunami struck, something Christian and compassionate replaced that enemy mindset for Ebb and Shelton. Looking at photos of the devastation, it became clear that the Japanese were no longer “the enemy.” They were neighbors in need.

Both became generous contributors to the ELCA Disaster Response fund designated for the survivors of the earthquake and tsunami.

“No, I don’t have any animosity toward them,” Ebb says of the Japanese. “I’m trying to do what I can to help people who are hurting.”

Ebb, who recently passed his 90th birthday, says, “The hurt across this world is terrible, and I just feel we need to help a little bit.”

“I just feel so sorry for the people over there, and this is the only way I can help,” she says.

Dorothy and Shelton also experienced the pains of war as Shelton left for Europe five months after their 1943 wedding in Texas. Pregnant when her husband, a glider pilot, left for the battlefields, she didn’t see him again for 18 months.

They joined Lutheran Church of Our Saviour in 1946 and began a family business selling mobile homes.

The need to help

Mark says, when news of the tsunami broke, both veterans asked how the ELCA was responding. Since the ELCA South Carolina Synod is a companion synod to the Japan Evangelical Lutheran Church, it was easy to make the connection.

Ebb has told his pastor about his service in the war against Japan.

“He told me about being on board when the ship was being strafed,” Mark remembers, “And yet his ability to set that aside and show compassion is quite moving.”

For Shelton and Dorothy, giving generously to the ELCA is a natural thing to do.

“We’ve been blessed,” Dorothy says, “and we have received, so we give. I don’t know any other way to put it. We give with our love to the church.”