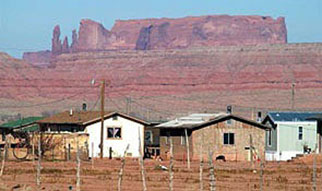 Today, American Indian and Alaska Native people are being held in poverty and unjust situations that affect every part of their lives, their families, communities, faith and spirit.

For over 500 years Christopher Columbus has been heralded as the man who discovered the Americas.

Over the centuries school children within the United States have been taught more about Columbus and his voyages to the west than they have been taught about the peoples and nations that already called this place in the world their home.

Each year, along with the other citizens of the United States, American Indian and Alaska Native people are reminded not only of Columbus’ commission by the Spanish monarchs, his three ships and his accidentally sailing into our homelands; we are also reminded of the destruction of a people and their culture.

He and his entourage did not serve as the best example of how to enter into the lands of our peoples for the many others who came after him to conquer us and claim our homelands for themselves.

Great support from this church

Over the last century, Lutherans have often been a great asset to and support for American Indian and Alaska Native peoples.

The ELCA ministries that remain in our communities, in most cases, work to support the healthy growth and self-determination that the community seeks.

In the past, during the years of the American Indian Movement, the Lutheran church bodies were dedicated allies and were committed to acknowledging the ills and injustice that the church at times perpetuates for American Indian and Alaska Native peoples, as well as assisting with creating a sustainable system within which our leaders could more effectively work toward obtaining civil rights for the rest of us.

I encourage you to order the ELCA produced documentary “Native Nations” to learn more about the movement and the relationship that Lutherans have had with American Indian and Alaska Native people in the past.

There have been many successes by our people, and our movement forward in regard to self-determination, sovereignty and civil rights has been great, yet our work is not done. We will continue to work for greater equality and justice for all American Indian and Alaska Native people. In addition, there is still a need for the church and its congregations to do work in this regard.

I urge you to take some time today to learn about the tribal nations that originally inhabited the land where your community and church now exist.

Learn about the present status of the tribal nations nearest your community. Does that tribe still live on its traditional lands or has it been relocated by the federal government to the place where is the tribe now?

How have missionaries affected tribal nations both negatively and positively?

What other ways have Lutherans appropriately or inappropriately engaged with American Indian and Alaska Natives in the past?

Build appropriate and right relationships with the tribal nations that exist in your state or region.

Live into right relationships with us; let that be what it means to live Lutheran.