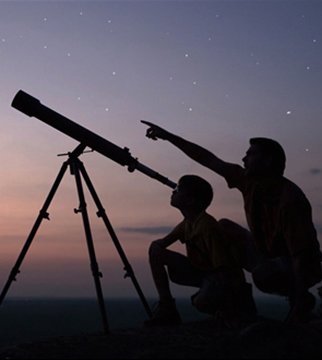 My household had a strange Advent in terms of our media viewing.

Like the rest of the nation, we’ve watched dozens of holiday specials and holiday episodes of television shows.

Through the magic of Internet streaming, we’ve watched even more holiday episodes, often of television shows that are no longer on the air. But we’ve also been watching a number of science specials, which puts my brain in an interesting place as we approach Epiphany.

Many of us think that “epiphany” means a huge breakthrough or insight, something earth shattering, life changing.

The story of many a science discovery, however, reminds us that an epiphany is more often the result of years of hard work and observation, showing up each day, even when there has been no discernable progress.

The epiphany of the magi

The magi, who could be seen as scientists of their day, tell us that too.

The magi noticed the star that announced Christ’s birth because they’d been watching the night skies even when the night skies did not seem to change. But then, one night, they noticed something new.

The story of the magi reminds us of how a paradigm-changing epiphany can be born out of something small, humble and seemingly insignificant.

We’ve learned a lot about space since the days of the magi. We know that it takes a long time for the light of a distant star to reach us.

So much could happen to prevent our viewing: clouds, sleepiness, our planet being in a different spot, our travels to a different spot on our home planet, a sick child — an endless list of possible impediments and distractions.

An epiphany often happens because of an intuitive shift. A scientist is studying one thing and ends up not with what she thought she was pursuing but an important discovery in a different arena.

The message of the star required a similar shift in the magi. Anyone looking for a redeemer or a new king would not have looked toward Bethlehem. Bethlehem was a sleepy little backwater of a great empire.

The magi might have been expecting to move toward Rome to meet a new ruler. But the star led them elsewhere.

The trail of evidence

Like any good scientist, they followed the trail of evidence. They didn’t try to manipulate their data so that it would match what they believed and hoped they would find. No, they packed up and followed the star to an improbable place.

History is full of fascinating discoveries because scientists, researchers and adventurers followed the work where it led them, instead of where they might have expected to go.

We enter the time of year when many of us yearn for an insight, a blaze of light that tells us how to lose that weight or find the perfect job or redeem our relationships.

The story of the magi reminds us that epiphanies are often smaller things, born out of a daily practice, leading us to the unexpected.

We may wish for an angel choir to show us the way.

But it may be something much simpler: a speck of light that has traveled over a great distance from a faraway star.

We may get an epiphany from something that seems so simple, so homely, and so commonplace: a star. There are thousands of them that our unaided eyes can see! It’s only if we observe them on a regular basis that we may be granted our unique epiphanies.