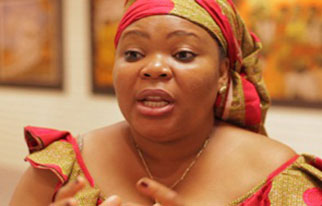 "Every time the bold men rose up, they rose up with guns," says Liberian Lutheran Leymah Roberta Gbowee, winner of the 2011 Nobel Peace Prize.

It began one evening in a candle-lit room in Monrovia, the capital city of Liberia. Leymah Roberta Gbowee gathered a small group of women and invited them to share their personal stories.

Living in a culture where women do not speak publically, they “let out,” says Leymah. They told heart-wrenching stories of husbands and sons murdered, sisters and daughters raped, and children dying from hunger and disease.

This was war, a brutal civil war in Liberia that began in 1989. And for more than a decade, women suffered and mourned in silence — until one day in 2003, when Leymah urged them to take action in the name of peace.

“You always see your savior in someone other than yourself,” says Leymah, a life-long Lutheran whose relationship with the ELCA dates back to 2004.

“So for us women, having never been socialized to believe that we have powers to interfere in the politics of our country, we were waiting for the bold men,” she says. But “every time the bold men rose up, they rose up with guns.”

Leymah realized that it would need to be the women of Liberia — Christian, Muslim, indigenous and elite women — to become the peacemakers.

Soon the original group of 20 grew to thousands. Known as the “women dressed in white,” they marched in the streets for peace, held prayer vigils in churches and mosques, and demanded meetings with government and rebel leaders to call for an end to the war.

They became the “Women of Liberia Mass Action for Peace” and successfully led a non-violent movement that ousted President Charles Taylor, brought a 14-year civil war to an end and paved the way for the election of Liberian President Ellen Johnson Sirleaf, the first female president of an African nation.

Little did Leymah realize that her efforts would win her the Nobel Peace Prize. She shares the prize with Sirleaf and Tawakul Karmen, a human rights activist from Yemen. This announcement was made October 7, 2011, in Oslo, Norway.

Leymah admits that she never believed her efforts would land her where she is today, because “it was about survival,” says the 39-year-old mother of six. She was trying to secure a future for her children.

Grounded in the Lutheran faith

Leymah’s story is chronicled in a documentary, “Pray the Devil Back to Hell.” Her newly released memoir, “Mighty Be Our Powers: How Sisterhood, Prayer, and Sex Changed a Nation at War,” examines “the power of women and the power of faith in getting you out from the darkest place in your life,” she says.

She attended Lutheran schools, and her “first connection with God came from attending the Lutheran church.”

Later Leymah became president of the women’s organization at St. Peter’s Lutheran Church in Monrovia, and she worked as a case worker for the Lutheran Church in Liberia’s Trauma Healing and Reconciliation Program, supported by the ELCA. As a case manager, Leymah was sent to work with child soldiers, a “transforming” experience for her.

As the Liberian women’s movement emerged with Leymah at the helm, her call for peace inspired ELCA members.

This past summer she was the keynote speaker at the Women of the ELCA Triennial Gathering in Spokane, Wash., and she inspired participants at ELCA Global Mission Events in 2004.

In 2006 Leymah was awarded a scholarship from the ELCA International Leadership Development Program to support her study in peace building at Eastern Mennonite University in Harrisonburg, Va.

“Leymah Gbowee’s life and leadership are a witness to the power of women to resist forces of violence and domination by creating a movement for reconciliation and peace,” said ELCA Presiding Bishop Mark S. Hanson.

“In Liberia, I experienced her passionate commitment to rebuilding a nation torn by civil war not seeking vengeance, but through her faith to encourage dialogue and inclusiveness at all levels of society,” says Bishop Hanson. “The ELCA has been blessed by her prophetic voice.”

“I am a woman who had been stuck, but I was able to find that power within myself to come out,” says Leymah, who at one point lived as a refugee with her family in Ghana. She is also a survivor of domestic violence.

So she tells women around the world that “there is no situation that you can find yourself in that is unique to you. There is always a way out.” She says, “The God that we serve always makes a way for his children.”

And “if you think that you’re so depressed and life has nothing to offer, just wake up in the morning, look around you, see the beauty of the world and just start to think, ‘How can I?’.

Leymah says she hopes women, men and young people will “step out. Good people need to step out” to change the world. “The only way good will ever overcome evil is when the good people step out like the Liberian women.”

People around the world also need to celebrate Dr. Martin Luther King Jr., Gandhi and Nelson Mandela “more than we celebrate, because the most difficult for anyone is to nonviolently engage with violent people,” she says.

“But the one way I see us changing this world that we live in is by speaking up, standing up,” says Leymah. “It’s time to say to the evils of this world, ‘Go back to the shadows, because the good is taking in the light.'”