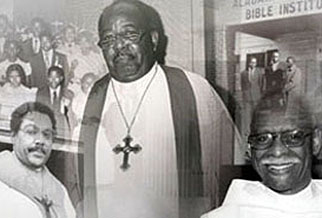 From left, the Rev. Will Herzfeld, the Rev. Nelson Trout and the Rev. Rudolph Featherstone.

As an African American Lutheran pastor I think of those Black Lutheran saints on whose shoulders I stand.

They were pioneers in a church that at times did not know what to do with its members of African descent.

I began my Lutheran journey in The Lutheran Church-Missouri Synod, and I recall meeting the Rev. Peter Hunt, who was a giant within Black Lutheranism.

The Rev. I. Carl Cameron was the first African American pastor to serve my home congregation in Jackson, Miss. He was the epitome of grace and humility.

When I came into the American Lutheran Church, one of the predecessor bodies to the ELCA, I met the Rev. Nelson Trout. He was instrumental in encouraging me to attend Trinity Seminary.

I sat, as did many of us, as one of his students, but he became more than just a teacher. He was mentor, friend and father for so many of us African Americans.

As I write this blog I’m looking at a picture of Trout who eventually was elected as one of the first African American bishops in the Lutheran church.

He would sometimes in his private moments speak of the pain that he suffered and the slights.

He exhibited a pride in so many that he had touched either through his ministry or his teaching and preaching but there was a special pride for those pastors of color.

On one occasion I remember him saying to us, “I wish that I had had the courage that you guys have when I was your age.” My personal reflection and reaction then as it is now is that he was a man of immense courage. He walked with dignity and grace. He had an awesome intellectual capacity.

The gospel is central

He challenged his students and he challenged the church to embrace a gospel that held the doing of justice as a necessary thing — not an option but central to the understanding and the living out of the faith.

Why is it essential that we use a particular month to reflect on this history? Because it reminds us that the fullness and the completeness of any history is inadequate if it leaves out any people, or if it paints the picture of a people who have been the victims of racism only as one dimensional or if what we choose to write is only the bad and the negative.

and so many others walked tall because they were amazingly powerful servants who made me better and who made this church better.

Even now as I mention their names my heart becomes filled with thanksgiving. I hope that you will find some time to learn about these incredible people of God.

Ken Wheeler is pastor of Cross Lutheran Church, an ELCA congregation in Milwaukee. He served 18 years as an assistant to the bishop of the Greater Milwaukee Synod of the ELCA.

Lectionary blog: On the shoulders of giants