Being homeless is hard enough. Being young, homeless and gay is much harder.

Since 2010 providing a safe place for homeless youth ages 13 to 21 has been the work of Montrose Grace Place, a ministry of Grace Lutheran Church, Houston. The church is in the city’s Montrose neighborhood, a magnet for people who are lesbian, gay, bisexual or transgender. 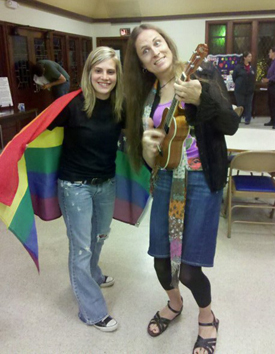 Ryan Rolston (left) and Lena Wieland volunteer with Montrose Grace Place, a ministry of Grace Lutheran Church, Houston, that reaches homeless teens, many of whom have alternative sexualities.

Each Thursday evening as many as 25 homeless youth come to Grace Place, where a dinner of macaroni and cheese or fried chicken is waiting. Wary at first, the visitors don’t say much. With time, trust builds.

Some of the young people have aged out of the foster system and have been rejected by family. They are couch-surfing, sleeping in parks or forced into sex by predatory adults in exchange for shelter. “They don’t have families through this period from childhood to adulthood,” said Lura Groen, pastor of Grace.

An art project, board games or karaoke comes next. Then talk with peers. The evening ends with the young people taking food that’s left and slipping back into the night.

Volunteer Barbara Carroll watches as the door closes. “I pray for them all the time,” she said.

To help: Is it time for you to join the fight against poverty at home? Here are some resources:


Lutherans are joining Christians nationwide to help people hurt by the economic downturn. Congregations are finding creative and exciting ways to care for their neighbors in need.