Under the theme “Citizens With the Saints,” sounds of worship will echo from the New Orleans Superdome July 18-22 during the 2012 ELCA Youth Gathering. In large and small group settings, participants will hear the new songs of Lutheran musical artists that point toward a future where our youth are leading. 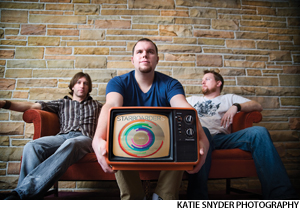 Starboarders, a Lutheran-grown band, is playing at the 2012 ELCA Youth Gathering in New Orleans. New songs by Lutheran musicians are frequently first heard at youth gatherings before catching on in congregations.

This all began in 1988 in San Antonio, the location of the newly born ELCA‘s first national youth gathering. Following the traditions of its predecessor churches, the ELCA committed to bringing thousands of youth from across the nation and around the world to learn, serve and, perhaps most memorably, worship in song, dance and sounds most would never hear back home.

In those early years, many youth tried to return home to give their congregations a taste of their experience, using visuals and cassettes or CDs. Back then many adults weren’t used to hearing rock tunes in worship. Even the names of the Lutheran artists of the 1990s were unfamiliar: Jay Beech, Dakota Road, Peter Eide and Jonathan Rundman, to name a few.

Meanwhile, Youth Gathering worship continues to be cutting edge, showing where Lutheran worship songs and styles are moving. Grounded in Scripture and our Lutheran foundations, these musicians are singing to the Lord an ever new song, just as previous generations.

For the 2012 Gathering, much of the worship will be led by a house band, with featured artists adding their gifts in both worship and performance. All are veterans of past Gatherings and worth exploring for personal inspiration as well as congregational worship. Here are just a few:

Rachel Kurtz: The writer of this year’s theme song, Kurtz is a Minnesota-based singer/songwriter with a unique voice and a folk-pop style. She teamed up with AGAPE for a “Citizens With the Saints” promotional tour in 2011.

AGAPE (David Scherer): It might surprise you to hear that this groundbreaking Christian rap artist is Lutheran. But Scherer brings all the energy of hip-hop with deep Lutheran convictions and themes.

Chris Clay: This Knoxville, Tenn., worship leader tours the country and is also an on air-personality at the No. 1 ranked gospel radio station in the country: Atlanta’s Praise 102.5 FM.

Peder Eide: Eide has spent much of his career creating and sharing rock/pop worship music with youth, adults and Lutheran congregations nationwide.

His most recent albums try to bridge the gaps between parents and youth when it comes to worship music and styles. As he puts it: “I want to help families worship more than just on Sunday mornings. My vision is to encourage their connection with Jesus while at the same time engaging with one another in worship at home, work, school and on vacation.”

Lost and Found: Michael Bridges and George Baum, a duo with roots in Niagara, N.Y., have a style described as somewhere between the Ramones and John Denver and an interactive, humorous delivery. If you’ve been to a recent Gathering, you’ve probably sung their “Lions” and shouted out “Slinky!” Their music also translates well to congregational worship.

This year, the Gathering will offer a daylong opportunity for youth to spend time with others from their synod exploring the seven practices of discipleship: pray, study, invite, encourage, serve, give and worship.

Each of the ELCA‘s 65 synods will also bring a worship band to lead their community that day. Many of these grassroots bands write their own music (available as recordings or in songbook form) and go on tour.

A few of the worship bands that will lead synod youth include:

Starboarders: Originally connected to Redeemer Lutheran Church, Atlanta, Starboarders has grown into a touring band that plays what they call “hope rock.” Their name is a reference to turning a ship around and changing the world.

All proceeds from their new album, Chroma, go to provide Lifestraws (filters) in regions lacking clean water, as highlighted in the group’s “Shelter Me” video (on YouTube) .

Now consider how that week of service, worship and encouragement for leadership can energize a congregation’s youth. Too often we as congregations “let” the returning youth lead one service, do “their” music and then we return to the status quo. Unintentionally, we’re leaving their gifts and enthusiasm to wither or find another home.

Contrary to what is often said, youth aren’t the future of the church. Youth are the church now. The challenge for adult worship leaders and pastors is to make this a reality.

If we truly believe, as Martin Luther said, that the church is present where the gospel is preached and the sacraments rightly administered, then the next generation’s language and music must be heard in our worship.

In a time when half of those under the age of 35 were not raised in a faith tradition, have not heard a pipe organ outside of a ballpark and represent the smallest demographic at weekly worship, the musical gifts arising out of the 2012 Youth Gathering are an evangelical addition our congregations need.

Clint Schnekloth, an ELCA pastor who blogs at Lutheran Confessions, suggests several steps for worship planners, including take some risks, develop relationships (this can be done through open mic nights, recitals and networking events), mentor new artists and give musical artists a role to play.

Worship isn’t about what we get out of worship but what we offer to God to build up the whole community in faith. So when our youth return, will we be willing to share God’s call to worship with them? Will we allow them to lead and encourage them to sing the new songs of faith in their hearts? My prayer is that we will.


Lyberg is a pastor of Trinity Lutheran Church in Findlay, Ohio, and host of the Wired Jesus Podcast.