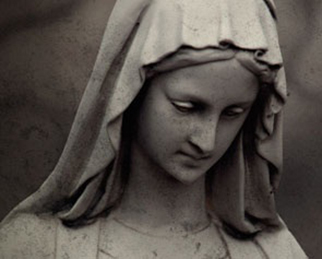 Mary has a special place in my heart. I’ve always admired her because of her courage and strength. That young woman had quite an impact on history.

She had an important job raising the son of God. Sometimes simply thinking about that takes my breath away. It is impossible for me to put my mind around that aspect of her life. She was the mother of God.

Mary was a very young mother, some report that she was as young as 14 when she gave birth to Jesus. That would make her five years younger than I am today. Here I am, worried about leaving for college next week, deciding what to pack and which of my “home” friends I need to see before I leave — and there she was, a child who had never “known” a man, expecting the birth of a very special baby.

Nazareth in 1 B.C. wasn’t exactly an encouraging place for an unwed mother. I am sure there was a lot of criticism and gossip at the time. From what I read, I wouldn’t be surprised if there was talk of stoning or at least she would have been ostracized from the community. Even Joseph was ready to leave her until God stepped in and explained the situation.

The first thing that came to my mind was, “What will my friends think?” Most people that I know do not see their parents as sexual human beings. There is a Greek tragedy lurking somewhere in there and it isn’t good — Greek tragedies never end well.

I was jealous. Very jealous. It was bad enough when my step-dad and his kids moved into my home. His daughters took over my room and his son leaves the toilet seat up in the middle of the night. Now I might not have a room to come home to at all. They are going to have to put that baby somewhere.

It was a bad summer.

I’m just now starting to warm to the idea of having a sister or a brother, another person who has the same biological mother that I have. God didn’t visit me in a dream like the one that Joseph had, but God has shown me small things that when added together put things into perspective.

Kate, a friend of mine pointed out that she has an aunt who is younger than she is. I never thought about that, I never put the two together. It means that Kate’s sister was pregnant before her mom was pregnant with Kate. From what I understand it wasn’t a big deal. In fact, Kate tells me that it is really fun to go out with her “aunt” and watch the reactions that people have when they are introduced.

I’ve had many a long conversation with my Grandma Peters about all of this. She tells me that it is OK to be angry but that I should never make my mom feel guilty about her happiness. This gave me pause to think. There are many more people involved in all of this than just me. Why would I want to make them unhappy (especially my mom whom I adore).

Now I am thinking about Mary and how she reacted to an unexpected baby. A role model? Yes, she was someone whose life we can learn from. She was full of grace and the Lord was with her.

Emily Peters will be entering her second year of college in the fall. She is a lifelong Lutheran who enjoys working with children.

My take: Mary as a figure of power