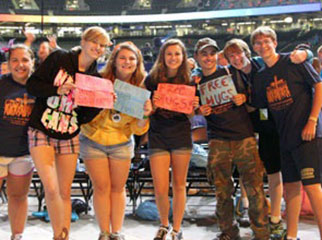 The Superdome in New Orleans has been filled with the energy of the ELCA Youth Gathering.

This past week has made Nicole Reeves of Love of Christ Lutheran Church, an ELCA congregation in Mesa, Ariz., proud to be a Lutheran.

While attending the 2012 ELCA Youth Gathering in New Orleans, she’s worked cleaning up and creating trails in a state park, met youth from around the world in the Ernest Morial Convention Center, and been empowered by speakers in the Superdome, especially Nadia Bolz-Weber of the House for All Sinners and Saints in Denver.

“She complimented Lutherans a lot,” Nicole says. “She was like, ‘Oh, you guys made me feel welcome,’ and it feels good to have someone who really didn’t like church meet Lutherans and like us.”

Now Nicole is thinking about how her experiences might impact her life once she gets back home. “I kind of want to go on a mission trip,” she says. “Last night, I was sitting in the hallway thinking about the meaning of life, and I was like, ‘I should probably go help people.'”

For many of 33,309 young people attending this year’s Gathering, the experience has been eye-opening. Whether it’s been hearing the stories of war, conflict and injustice in the Practice Peacemaking area of the Convention Center, worshiping with their friends and neighbors, or serving the people of New Orleans, the kids who attended the Gathering have made memories that have the potential to change the trajectory of their lives.

The Gathering, which happens every three years, returned to New Orleans in 2012 after also being held there in 2009. It’s the first time in the 100-year history of the event that it’s returned to the same city for consecutive Gatherings, but the organizers of the Gathering decided there was still too much work to be done in the city for them to move on to somewhere new.

This year the event had three distinct components: Discipleship, Peacemaking, and Justice.
To practice discipleship youth participated in Bible studies and worship with both their synods and the Gathering as a whole.

For Madeline Parker of Central Lutheran Church in Chippewa Falls, Wis., practicing discipleship by worshiping with so many other young people gave her a new perspective. “I love how everyone is really accepting. With 33,000 other people here, you just know that you’re not alone. Sometimes you feel like you’re alone when you’re a Christian, but with all of this support that you see that you have all over the nation, it’s really nice to see.”

Others were moved by the speakers like Presiding Bishop Mark Hanson, Nobel Peace Prize Laureate Leymah Gbowee, author Shane Claiborne, the Rev. Andrena Ingram, and anti-bullying activist Jamie Nabozny, who asked kids to think about the things they say in their everyday lives that might be having an effect on others.

“Sometimes you can bully people when you don’t even realize it just by like messing around and stuff,” says Jacob Hemmingway of St. Peter Evangelical Lutheran Church in Norwalk, Ohio. “I realized that I do that a lot. So I’ll try to think about it more and not do it as much.”

In the Practice Peacemaking area of the Convention Center, students could not only participate in activities like zip lines, basketball and karaoke, but they could get to know peacemaking in an intimate and personal way. They could donate blood or hair to help those in need. They could read the stories of those affected by human trafficking. Habitat for Humanity hosted a booth where teens could construct frames to later be used in the construction of houses. There were also opportunities for reflection through the arts and music and booths where kids could get information on ELCA colleges and seminaries.

The 100 Wells Challenge booth hosted by ELCA World Hunger allowed students to put themselves in the shoes of young people around the world who do not have access to clean water. The booth featured a course where students were asked to carry 41.5-pound jugs of water for a tenth of a mile to simulate the experience many people around the world go through every day.

Dane Bakken of Springdale Lutheran Church in Mount Horeb, Wis., took the challenge a bit further, traversing the course 37 times to simulate the average 3.7 miles people in Africa must walk for clean water. “Well, you can read about it as much as you want,” he says, “but until you do it that’s what really makes you realize how hard it is.”

Another large feature of the Practice Peacemaking area was The Wall where students could meet young people from around the world who live in countries like Kenya, Liberia, Mexico and Palestine where they must face the consequences of war and conflict every day.

Nicole Reeves says it was The Wall that made her want to take a mission trip. She says when she visited the Bosnian section of the wall, “My hair was standing up on end. My heart was beating.” She points to the necklace she picked up there made by a teenager in Bosnia. “I’m going to wear this little necklace forever.”

One of the biggest objectives of the Practice Justice component of the experience was to address the city’s literacy problems. On Saturday the young people participated in 51 book festivals where about 1 million children’s books were distributed to kids in New Orleans. They also held 48 literacy camps where Gathering attendees mentored young kids who were just learning to read.

Other service projects addressed issues of sustainability, poverty and city beautification. A group from Evangelical Lutheran Church of Good Shepherd in Mount Holly, N.C., heard a speaker discuss the dangers of human trafficking and wrote letters to their state legislators about it. “We learned about human trafficking and we wanted to do something about it, and we thought our state should do something about it,” said adult volunteer Tracy Fox.

Students from Faith Lutheran Church in Janesville, Wis., helped prepare clothes to be sent to people overseas. “We folded clothes at a shelter for moms that have babies and then the clothes are going to be sent on to Romania,” says Grace Randles. “There were a lot of clothes so it’s good that people in other countries are going to be able to use it.”

Now that students are returning home, they are putting their experiences into perspective.
For Tess Strayer of Advent Lutheran Church in Harleysville, Pa., her experience learning about hunger in America in the Practice Peacemaking component has made her and her friends want to go home and get to work, “In our hometown there’s Calvary Community Garden at the Mennonite church which we’re partners with so we actually worked there one Saturday, and we’re going to work there again.”

For others, it may take a while to process what they’ve learned, but there’s no question that they’ve seen Jesus while they were here.

His friend, Eric Hitt, agrees. “I have seen him everywhere. In the Superdome. In 33,000 people’s faces.”